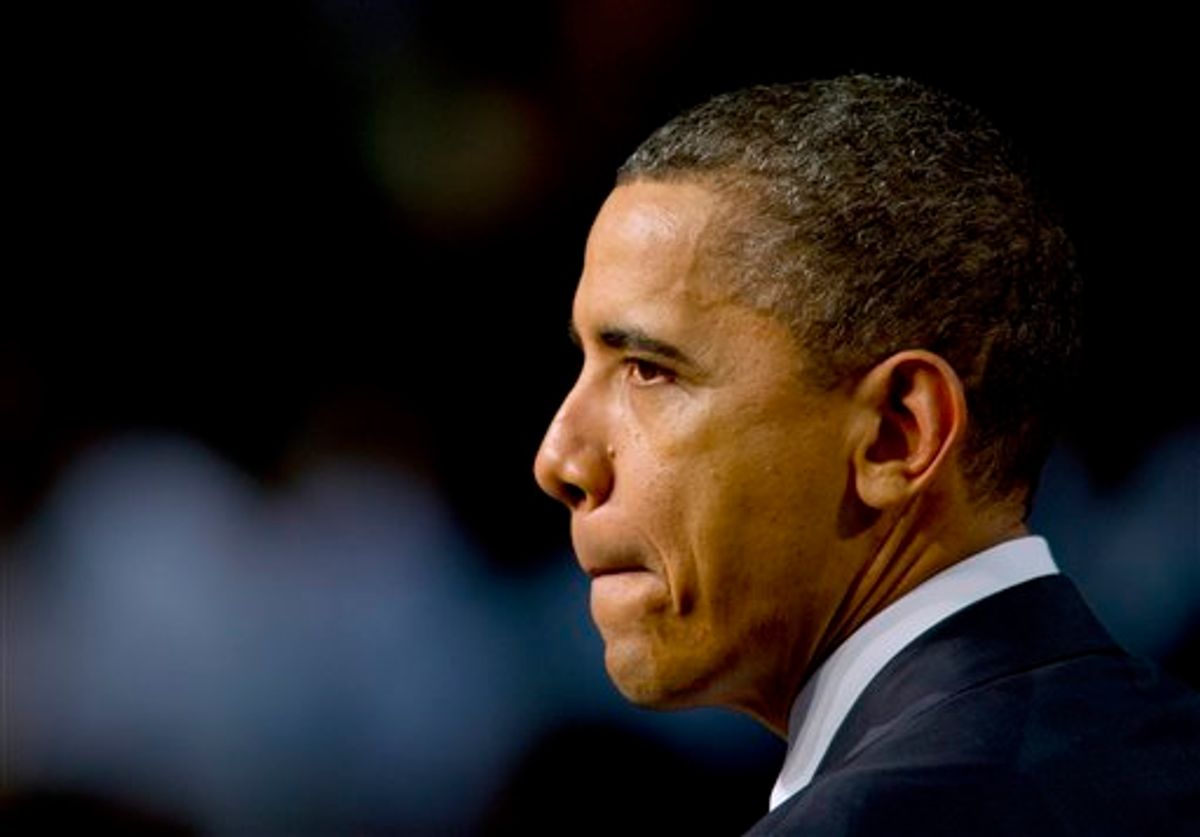 President Obama yesterday signed an Executive Order which, as The Washington Post described it, "will create a formal system of indefinite detention for those held at the U.S. military prison at Guantanamo Bay" and "all but cements Guantanamo Bay's continuing role in U.S. counterterrorism policy." The Order -- which codifies a system of charge-free indefinite detention and military commissions once ostensibly scorned by Democrats -- was captured perfectly by this headline from Time:

None of this is the slightest bit unexpected. The new Executive Order has been previewed for months and merely codifies what has long been Obama's policy: "long" in the sense of "since he's inaugurated"  -- not, of course, "when he was a Senator and presidential candidate." I'm writing about this merely to address the excuse from the White House and its loyalists that the fault for this policy, this inability to "close Guantanamo," lies with Congress, which forced the President to abandon his oft-stated campaign pledge. That excuse is pure fiction.

It is true that Congress -- with the overwhelming support of both parties -- has enacted several measures making it much more difficult, indeed impossible, to transfer Guantanamo detainees into the U.S. But long before that ever happened, Obama made clear that he wanted to continue the twin defining pillars of the Bush detention regime: namely, (1) indefinite, charge-free detention and (2) military commissions (for those lucky enough to be charged with something). Obama never had a plan for "closing Guantanamo" in any meaningful sense; the most he sought to do was to move it a few thousand miles north to Illinois, where its defining injustices would endure.

The preservation of the crux of the Bush detention scheme was advocated by Obama long before Congress' ban on transferring detainees to the U.S. It was in May, 2009 -- a mere five months after his inauguration -- that Obama stood up in front of the U.S. Constitution at the National Archives and demanded a new law of "preventive detention" to empower him to imprison people without charges: a plan the New York Times said "would be a departure from the way this country sees itself." It was the same month that the administration announced it intended to continue to deny many detainees trials, instead preserving the military commissions scheme, albeit with modifications. And the first -- and only -- Obama plan for "closing Guantanamo" came in December, 2009, and it entailed nothing more than transferring the camp to a supermax prison in Thompson, Illinois, while preserving its key ingredients, prompting the name "Gitmo North."

None of this was even arguably necessitated by Congressional action. To the contrary, almost all of it took place before Congress did anything. It was Barack Obama's position -- not that of Congress -- that detainees could and should be denied trials, that our court system was inadequate and inappropriate to try them, and that he possessed the unilateral, unrestrained power under the "laws of war" to order them imprisoned for years, even indefinitely, without bothering to charge them with a crime and without any review by the judiciary, in some cases without even the right of habeas review (to see why claims of such "law of war" detention power are so baseless, see the points here, especially point 5).

In other words, Obama -- for reasons having nothing to do with Congress -- worked from the start to preserve the crux of the Bush/Cheney detention regime. Even with these new added levels of detention review (all inside the Executive Branch), this new Executive Order is little more than a by-product of that core commitment, and those blaming it on Congress either have little idea what they're talking about or are simply fabricating excuses in order to justify yet another instance where Obama dutifully "bolsters" the Bush War on Terror template. Indefinite detention and military commissions are continuing because Obama worked from the start for that goal -- not because Congress forced him to do so.

As as happened over and over, while progressives and civil libertarians are furious about the new Order, former Bush officials and right-wing Warriors are ecstatic. The anti-Muslim McCarthyite Rep. Peter King (R-NY) issued a statement this morning, as quoted by The Post, which lavished Obama with praise: "I commend the Obama Administration for issuing this Executive Order. The bottom line is that it affirms the Bush Administration policy that our government has the right to detain dangerous terrorists until the cessation of hostilities." That perfectly captures the legacy of Barack Obama on civil liberties.

It's certainly possible to claim that none of this much matters because other issues are more important. It's coherent to argue that -- everyone has to prioritize what matters most -- but that wasn't an argument I ever heard prior to January 20, 2009, when Democrats generally and Obama specifically aggressively touted these issues for substantial political gain.


UPDATE:  Headlines certainly do speak volumes on this story.  ProPublica's Dafna Linzer, who has been covering this story in detail for some time, today writes about Obama's Executive Order under this apt headline:

In particular, she details how -- despite some moderate new benefits to detainees -- the new Executive Order has its genesis in the Bush/Cheney regime:

While the order is new, most of the ideas it contains are not. This is the third time such a board has been created for nearly the same purpose. Two similar processes to review detainee cases were in place during the Bush administration. Like its predecessors, the Obama administration's review process will operate outside the courts and will be subject to no independent review.

As always, the most harmful aspect of the Obama legacy is that he has converted what were once controversial right-wing Bush policies into unchallenged bipartisan consensus, to endure indefinitely and without any opposition from either party.  And, to underscore the point once more:  Obama's plan as President (as opposed to as a candidate) was never to dismantle the Bush/Cheney system at Guantanamo; before Congress acted at all, his only objective was to preserve its core, defining features and then move that system to Illinois.