The market's doing incredibly well these days. Too bad the rest of us aren't 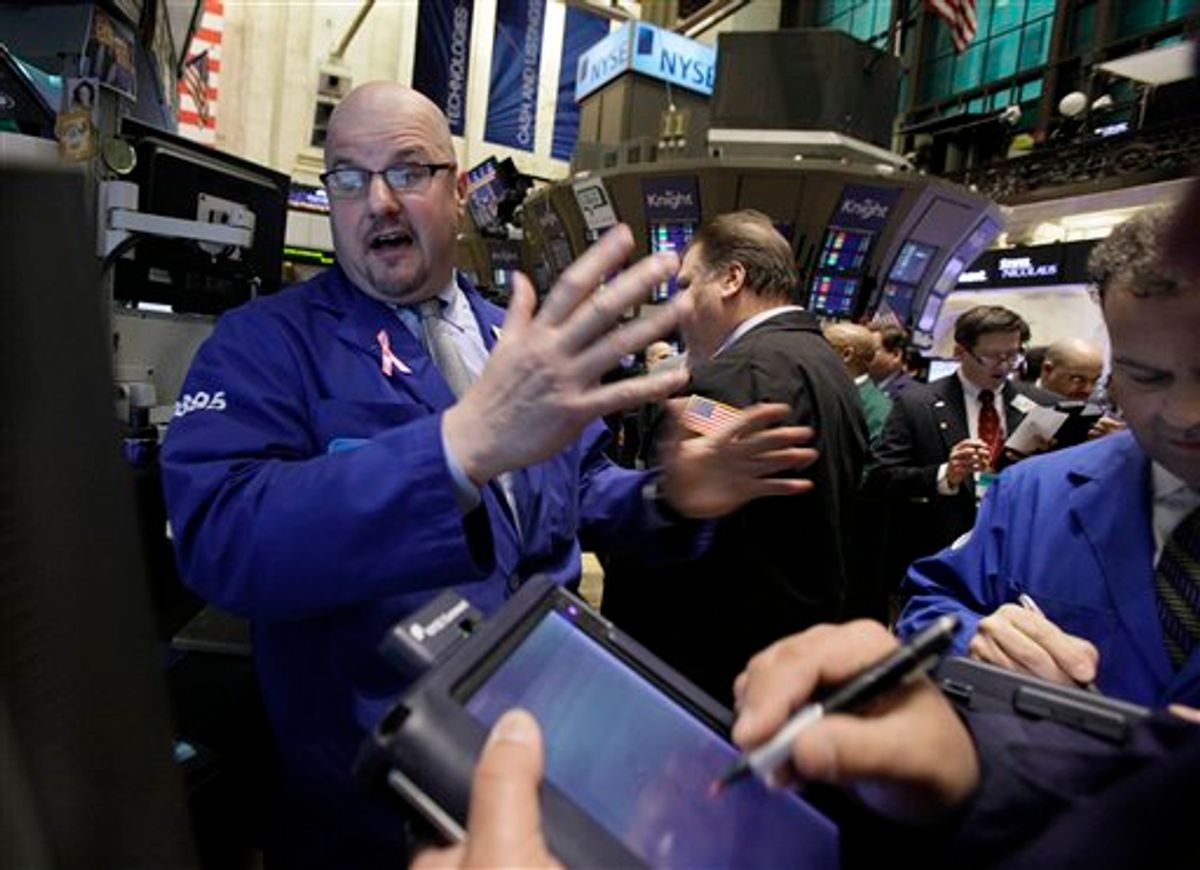 FILE - In this March 2, 2011 file photo, specialist John Urbanowicz, left, works at his post on the floor of the New York Stock Exchange. The stock market's fastest climb in decades reaches the two-year mark Wednesday, March 9, yet investors aren't exuberant. They're cautious and watching their stocks closely for fear that they might experience another meltdown. (AP Photo/Richard Drew, file) (AP)
--

From its peak in October, 2007 until its trough two years ago, the stock market lost almost $8 trillion in value. That value hasn't been completely restored but the Street is well on the way.

Some say the Street's buoyant revival should pull the rest of the economy with it. But this is hardly a buoyant recovery.

In theory, at least, the extraordinary bull market should be making Americans feel far wealthier than they felt two years ago. So they should be spending far more, and that spending should be fueling far more job growth than it is.

Why hasn't it happened? In reality, the vast majority of Americans don't feel wealthier because they hold few if any shares of stock. In fact most feel poorer because their major asset is their homes -- now worth 20 to 40 percent less than they were worth in 2007 (and there's no sign of a rebound in housing).

The Street's bull market over the last two years has seriously enriched only the wealthiest 5 percent of Americans who hold the lion's share of stock. While their earned income starts at $210,000, their unearned income -- dividends and capital gains -- now puts them considerably above that.

Shouldn't the shopping of the top 5 percent spur lots of new jobs? Not really. While the top 5 percent are spending more, they're not spending all that much as a proportion of their earnings. The rich sock away a bigger share of their income than everyone else. After all, being rich means you already have most of what you want.

Moody's Analytics estimates that the shopping of America's richest 5 percent now accounts for 35.5 percent of all U.S. consumer spending. Just think how much more spending would be going on -- and jobs thereby created -- if more Americans shared in Wall Street's gains.

The remaining 95 percent of Americans are still holding back from the malls because they're worried about their jobs, their falling wages, their higher health-care deductibles, and their dropping home values. And as long as they continue to hold back, this recovery will be painfully slow.