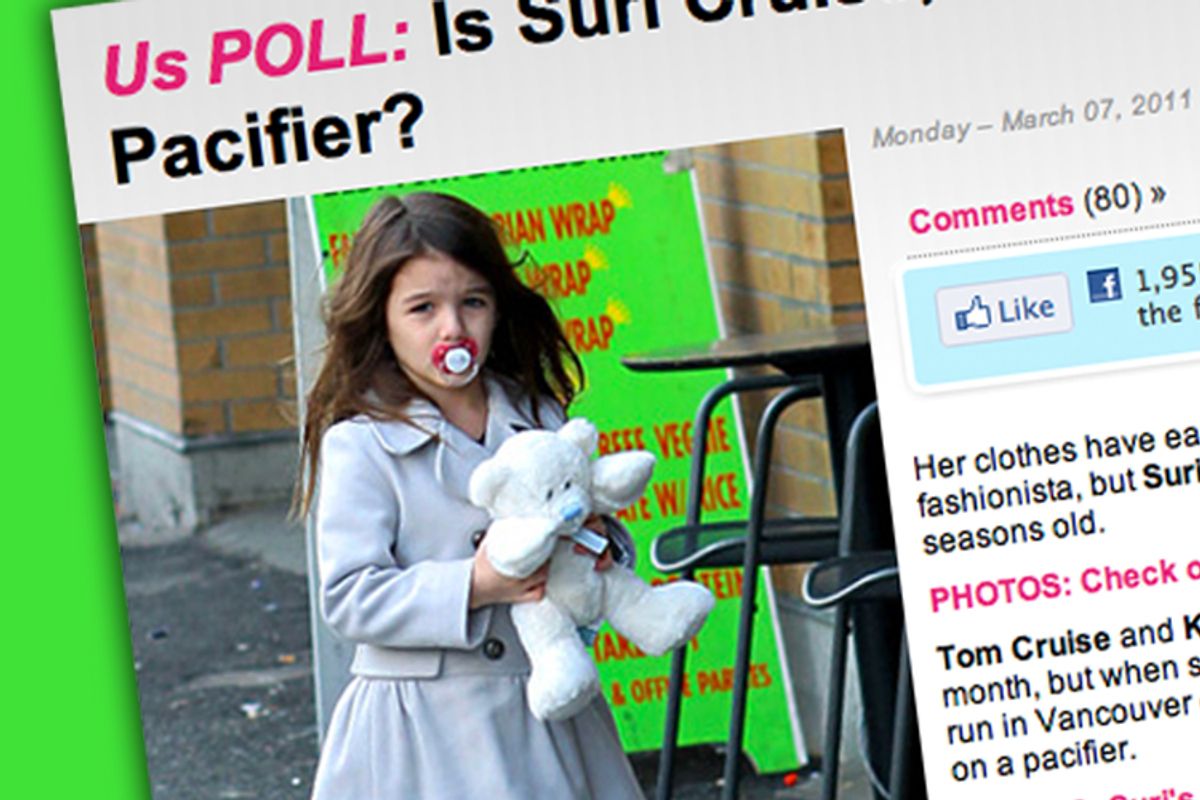 She's one of the most photographed young women in the world, renowned for her impeccable fashion sense and beauty. But when she makes a sartorial miscalculation or stays out a little too late, woe betide 4-year-old Suri Cruise.

Such has been the case this week, when the fruit of Tom Cruise and Katie Holmes' loins found herself under scrutiny for first appearing too babyish and then for partying too hard. Welcome to the modern condition of being female, kid. Everything you're doing is wrong.

First, little Suri drew gasps for stepping out Sunday in a Burberry trench – while sucking defiantly on a pacifier. Young Miss Cruise is no stranger to controversial fashion choices, though her critics are more accustomed to thumping her for dressing too grown-up in high heels, manicures and lipstick (and faulting her famous parents). Yet when Suri was snapped in Vancouver with a teddy bear in tow and a world-weary look on her binky-accessoried face, the fashion police went into overdrive. E! worried that "It seems a bit odd that she would still be using a pacifier. Or is it just us?" while WhyFame mused that the sight "looks weird." And Us, critiquing that her "latest accessory seems a few seasons old," ran a poll asking if she was too old for a pacifier -- and 97 percent of the 50,000 respondents said yes. Who says we can't get Americans to vote?

The dust-up over Suri's oral fixation surely isn't just about being judgmental of a preschooler, right? Always reliable Fox was quick to point out the health risks,  letting pediatrician and author Dr. Ari Brown warn that pacifiers put children at risk for ear infections and dental problems. Think of the children! But is the real issue Suri's discomfort -- or that of other adults? Or as Brown told Fox, "The parent needs to grow up with the child."

There's nothing like the sight of a kid behaving even slightly outside the gender- or age-confined box to freak people out, and heap a world of judgment on the parents. She's dressing too old. She's acting too young. She's too tomboy.  So when the obviously much too babied Suri -- who was still using a bottle long past the point of it looking cool -- went out with Mom Tuesday, it was an ironic inevitability that someone in the media would criticize her for "growing up too fast." After she was snapped in New York at the new Daniel Radcliffe revival of "How to Succeed in Business Without Really Trying," the Daily Mail noted, "Katie Holmes appeared to be indulging Suri Cruise's grown-up tastes a step too far."

Growing up is rarely a linear process. Some days it's Hello Kitty at breakfast, "Star Trek" conventions in the afternoon. And there is likely much that is especially unusual about being the child of two famous parents, raised both in Scientology and the spotlight. But the intense speculation about little Suri's every "indulgence" -- whether it's a pacifier or a Broadway show -- reflects the dark side of the "it takes a village" ethos. If you've got kids, everybody thinks they have a right to an opinion about how you're raising them. It's a free for all of judgment that generously extends to both parents and offspring, and more particularly, mothers and their daughters. Parenting is such a crap shoot of decision-making, it's easy to assume a family doing something different is a family doing something wrong -- and to criticize accordingly.

Frankly, if I were being constantly photographed and scrutinized, I'd have a hip flask full of Wild Turkey and a two-pack-a-day Camel habit, and I'm not 4. And maybe Holmes and Cruise are playing into the paparazzi machine by not going out of the way to avoid it. But Suri's got to get around, and if she's going to roll with a binky to make the road a little smoother, so be it. Speaking to the L.A. Times Monday, Julie Hanks of Wasatch Family Therapy said, "Most parents of 5-year-olds would be embarrassed to have their child seen in public sucking a pacifier because of well-known health and dental health concerns." Yet of all the reasons to make any choice for one's child -- how she dresses, how late she stays up -- a parent's own insecurity about what others might think is the lamest and least of all. Is she happy? Is she secure? Whether she's Suri Cruise or your own kid raising eyebrows at school with her tutu and her refusal to eat carrots, only she and her family really know the answers for sure. And so when Julie Hanks says, "Either Katie isn't aware or she doesn't care what people think," it's clear that in one regard, she and her high-heeled, pacifier-flaunting daughter are doing all right. And the rest of the world can suck it.