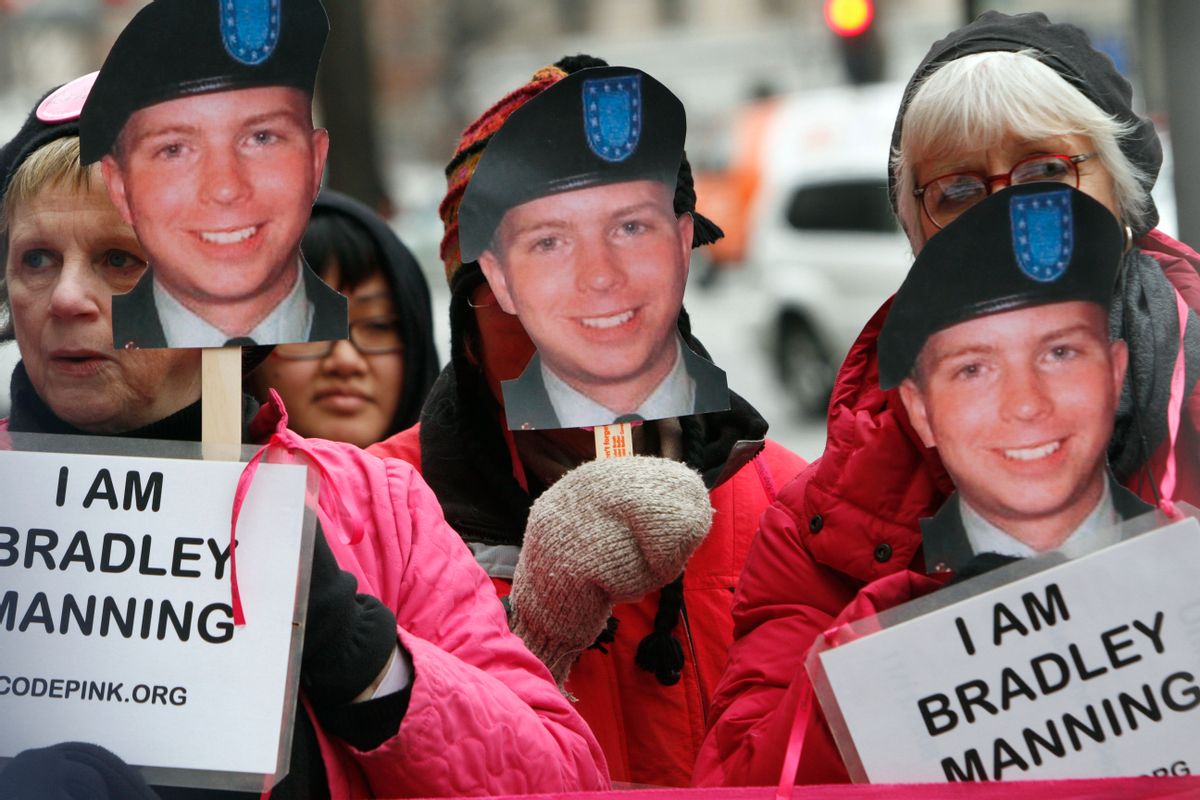 In late January, Amnesty International wrote a letter to Defense Secretary Robert Gates denouncing the conditions of Bradley Manning's detention as "unnecessarily harsh and punitive" and in "breach the USA’s obligations under international standards and treaties."  In the wake of the prolonged forced nudity to which Manning is now being subjected, Amnesty has escalated its denunciations: as the Associated Press put it today, the group is now "urging people to complain to the Obama administration about the confinement."

In particular, Amnesty said that "the conditions inflicted on Bradley Manning . . . amount to inhumane treatment by the US authorities" and "appear to breach the USA’s human rights obligations."  As a result, the group is encouraging as many Americans as possible to demand an end to these conditions (independent of Amnesty, there is a planned protest outside the Quantico brig on March 20, expected to be fairly large in size, with others being planned at military detention facilities around the country for later dates).  In case anyone is wondering what Amnesty is:  it's the world's premiere human rights organization which Democrats once held up as authoritative on issues on detainee abuse circa 2001- January 20, 2009 -- remember that?

Yesterday, the Quantico base commander denied Manning's formal request for less harsh treatment -- including an end to his forced nudity and 23-hour-a-day solitary confinement.  That request -- which is really a formal complaint of mistreatment -- will now be forwarded to the Secretary of Navy, and if he also rejects it, then Manning's lawyer will file a Writ of Habeas Corpus with the Army Court of Criminal Appeals.  Manning's counsel today released his rebuttal to the Commander's decision and it supplies much more detailed information about just how harsh and punitive is Manning's treatment; Marcy Wheeler documents how similar in language and content is this treatment to many of the core methods of degradation popularized during the Bush administration.  But as we well know, caring about what Amnesty thinks is -- just like concerns over detainee abuse and indefinite detention -- so very 2005.

UPDATE [Fri.]:  According to Philippa Thomas -- a long-time British journalist and current Nieman Journalism Fellow at Harvard -- State Department spokesman P.J. Crowley was speaking to a small audience of 20 people (including Thomas) at MIT regarding social media, and the following occurred:

And then, inevitably, one young man said he wanted to address "the elephant in the room". What did Crowley think, he asked, about Wikileaks? About the United States, in his words, "torturing a prisoner in a military brig"? Crowley didn’t stop to think. What’s being done to Bradley Manning by my colleagues at the Department of Defense "is ridiculous and counterproductive and stupid" . . .

Thomas noted that Crowley added that Manning deserves to be in prison, but as she puts it:  "But still, he’d said it. And the fact he felt strongly enough to say it seems to me an extraordinary insight into the tensions within the administration over Wikileaks."  She adds:  "A few minutes later, I had a chance to ask a question. 'Are you on the record?' I would not be writing this if he’d said no. There was an uncomfortable pause. 'Sure'."  If she's reporting that accurately -- and she's obviously a credible journalist -- then that's quite extraordinary.


UPDATE II [Fri.]:  A second person who was at the meeting with Crowley -- Chuck Toporek -- confirms Thomas' account and writes:

During the Q&A, Mr. Crowley stated that he felt Bradley Manning, who has been in military custody since May 2010 for his connection to WikiLeaks, is being "mistreated" while in custody.

When Mr. Crowley said that, people in the room applauded. He was later asked by a BBC reporter in the room if everything he said today was "on the record," to which he said yes. . . . So there you have it. A high-placed individual within the U.S. State Department believes Bradley Manning is being mistreated. On the record. In public.

I have often written that if the State Department were to apply the human rights standards it uses to condemn other nations to its own government, it would have to frequently condemn the U.S.  Bizarrely, that is actually happening here.


UPDATE III:  Ethan Zuckerman of Harvard's Berkman Center for Internet and Society attended the talk with Crowley and posted a rough transcript of the Q-and-A session, which includes this:

Charlie deTar: There's an elephant in the room during this discussion: Wikileaks. The US government is torturing a whistleblower in prison right now. How do we resolve a conversation about the future of new media in diplomacy with the government’s actions regarding Wikileaks?

Crowley:  I spent 26 years in the air force. What is happening to Manning is ridiculous, counterproductive and stupid, and I don't know why the DoD is doing it.

That certainly appears to settle the matter of confirmation.  What's striking is that the questioner asserted that Manning was being "tortured" and Crowely did nothing to contest that, but instead emphatically condemned the treatment.  I don't recall an instance where one administration official so harshly and publicly criticized the conduct of the administration on such a high-profile matter.  I can only speculate that this was not a planned statement but rather an unplanned outburst from Crowley at a small gathering, but the fact that he said it at all is really quite remarkable, commendable, and, I hope, ultimately helpful.


UPDATE IV:  Crowley now confirms the accuracy of these reports, but tells Foreign Policy's Josh Rogin:  "What I said was my personal opinion. It does not reflect an official USG policy position. I defer to the Department of Defense regarding the treatment of Bradley Manning."  This seems to be one of those exceedingly rare moments when a high-level administration official unintentionally spoke with candor and conviction about the repellent acts of the government of which he is a part.

With respect to Private Manning, I have actually asked the Pentagon whether or not the procedures that have been taken in terms of his confinement are appropriate and are meeting our basic standards.  They assure me that they are.  I can't go into details about some of their concerns, but some of this has to do with Private Manning's safety as well.

Oh, that's very reassuring -- and such a very thorough and diligent effort by the President to ensure that detainees under his command aren't being abused.  He asked the Pentagon and they said everything was great -- what more is there to know?  Everyone knows that on questions of whether the military is abusing detainees, the authoritative source is . . . the military.  You just ask them if they're doing anything improper, and once they tell you that they're not, that's the end of the matter.

I have no doubt that George Bush asked the DoD whether everything was being run professionally at Guantanamo and they assured him that they were.  Perhaps the reason there haven't been any Wall Street prosecutions is because Obama asked Jamie Dimon and Lloyd Blankfein if there was any fraud and those banking executives assured the President that there wasn't.

UPDATE VI:  In an MSNBC segment with Democratic strategist Krystal Ball and GOP strategist Amy Holmes, Dylan Ratigan today excoriated Democrats and "the left" for remaining silent in the face of civil liberties and other abuses by Obama which would provoke -- and did provoke -- vociferous and constant objections if carried out by George Bush.  At the end of the segment, Ratigan acknowledges that some have been consistent and have vocally objected to Obama's civil liberties abuses generally and the treatment of Manning specifically -- he refers to me and FDL as examples -- and then clarifies that his criticisms are aimed at Democratic politicians and their loyalists, who opportunistically pretended to care about such things when doing so produced partisan advantage (when there was a GOP President), but now ignore them because they no longer do (because there's a Democratic President).  Without endorsing everything that is said here, the five-minute segment is worth watching: