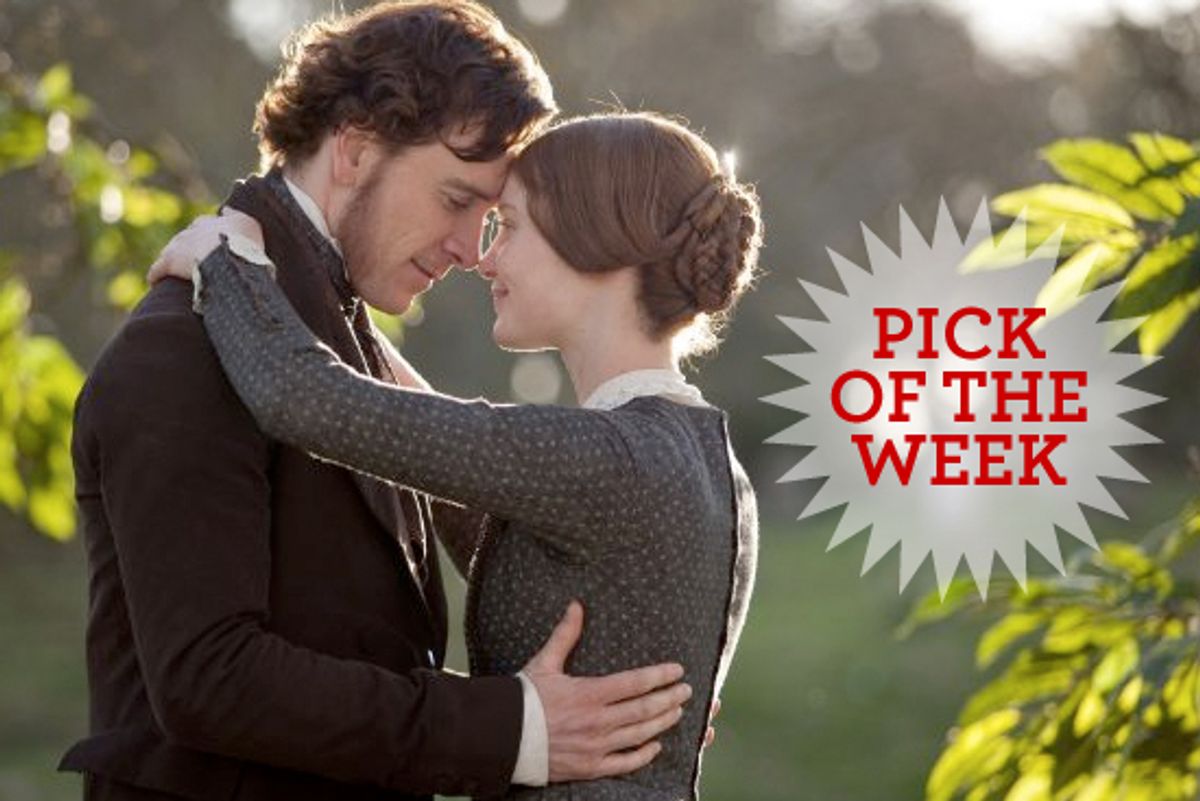 In reframing one of the most read but least understood of all English novels as a story about two lonely people against an isolated landscape -- a story closer to a John Ford western than to a conventional, BBC-style presentation of Victorian England -- the young American director Cary Joji Fukunaga has very likely surpassed all previous cinematic versions of "Jane Eyre." That's a matter of taste, of course, and I'm not disrespecting the numerous good-to-excellent TV adaptations of Charlotte Brontë's novel, which go back to the '50s and include the superb 2006 version starring Ruth Wilson and Toby Stephens.

But Fukunaga and screenwriter Moira Buffini (a prominent British playwright who also wrote the script for Stephen Frears' undervalued "Tamara Drewe") have grasped that cinema is not television, and that just because a famous book contains a lot of words, you don't need to fill up the movie with them. When ramrod-straight governess Jane Eyre (Mia Wasikowska) and her moody employer, Edward Fairfax Rochester (Michael Fassbender), do speak, the lines are rich and resonant with the idiosyncrasy of 19th-century English speech. I haven't gone back to check, but I'm pretty sure Buffini is pulling lines straight out of Brontë. (The terrific cast also includes Judi Dench as Mrs. Fairfax, the housekeeper, and Jamie Bell as St. John Rivers, the young clergyman who takes Jane in after she flees from Rochester.)

More important, we get the impression that days pass at Thornfield Hall, Rochester's estate in the remote north of England, with little or no conversation at all. And the wide, wild, ferocious landscapes captured by cinematographer Adriano Goldman vividly convey the idea that these damp, freezing moorlands -- where Charlotte Brontë and her sisters would all die before age 40 -- cling to the outer edges of British civilization, almost as far from the center of empire as Africa or India. In a sense, the setting makes Rochester's behavior more comprehensible (and if you seriously need a spoiler warning for a novel published in 1847, here it is). Jane's haggard master, played by Fassbender as a crumpled, sarcastic and fundamentally defeated man, manages to convince himself that out here in the wilds of Yorkshire, society's laws do not apply -- or at least not to him.

Adapting a Victorian classic definitely isn't the obvious choice for Fukunaga, a California native of half-Japanese ancestry whose acclaimed debut, "Sin Nombre," was a violent indie thriller, made entirely in Spanish and mostly shot in Mexico. But maybe it was time for "Jane Eyre" to be set free from an overdose of Englishness, and on the evidence so far, we're talking about a young director with a tremendous gift for cinema and almost limitless range. Either way, this retelling is vivid, alive and loaded with a doomed passionate intensity that feels very Brontë-esque. Arguably Fassbender and Wasikowska are both too good-looking for these roles; Jane is meant to be a plain, Quakerish girl and Rochester to be brooding and ugly. About the best way I can explain it is that both are such physical actors, and so committed to these characters, that their prettiness never gets in the way.

Buffini's script dispenses with Jane's tormented-orphan childhood by way of a short introductory scene, which may displease some Brontë buffs but gets us more quickly to Thornfield, where Jane first encounters Rochester in the misty, wild woods as a half-demonic figure, as shaggy as the stallion he rides. He terrifies her with his masculine, erotic energy -- but it is Jane who stands her ground while Rochester comes away injured, which pretty well summarizes their entire relationship. In the first conversation between Jane and Rochester, Fassbender strikes the right note of irony and cruelty, but his posture gives him away. He sinks down in the chair, as if crushed by his secret, while Wasikowska's Jane sails straight at him like the figurehead of a ship, bewildered by him (and attracted to him) but refusing to act intimidated.

I've seen enough of Fassbender in demanding movies like "Fish Tank" and "Hunger" to know that he could play a terrific Rochester, but Mia Wasikowska's performance as the ultimate Gothic-novel heroine should propel this remarkable 21-year-old Australian to another level entirely. In my recent conversation with Fassbender, he compared Wasikowska to a young Meryl Streep, and now I see it. Jane must be alternately ferocious and vulnerable, modest in manner yet enormous in spirit, and utterly unwilling to compromise her moral code. She has to embody all the story's contradictory themes -- the idea, for instance, that women are the stronger sex, and strongest of all because their destinies are limited and they must so often be subservient -- without ever saying so, and Wasikowska does this in almost miraculous fashion.

"Jane Eyre" is something like the ur-text of chick lit (along with "Pride and Prejudice"), but Fukunaga and Buffini see clearly that Brontë never presents romantic love as painless or happy endings as effortless. Jane slices through Thornfield Hall like a razor, exposing all its secrets and exposing herself to shame and ridicule, because she loves Rochester. Because he loves her back, Rochester reveals himself as a criminal and a hypocrite, hiding a secret in the attic that, in this version, seems all too real while remaining one of the most potent symbols in all of literature. "Jane Eyre" is a passionate, impossible love story, one of the most romantic ever told. But it's also a cold, wild story about destruction, madness and loss, and this movie captures its divided spirit like none before.