A new Youtube clip shows how to hack into video billboards with just an iPhone, balloon, and a transmitter. Nope 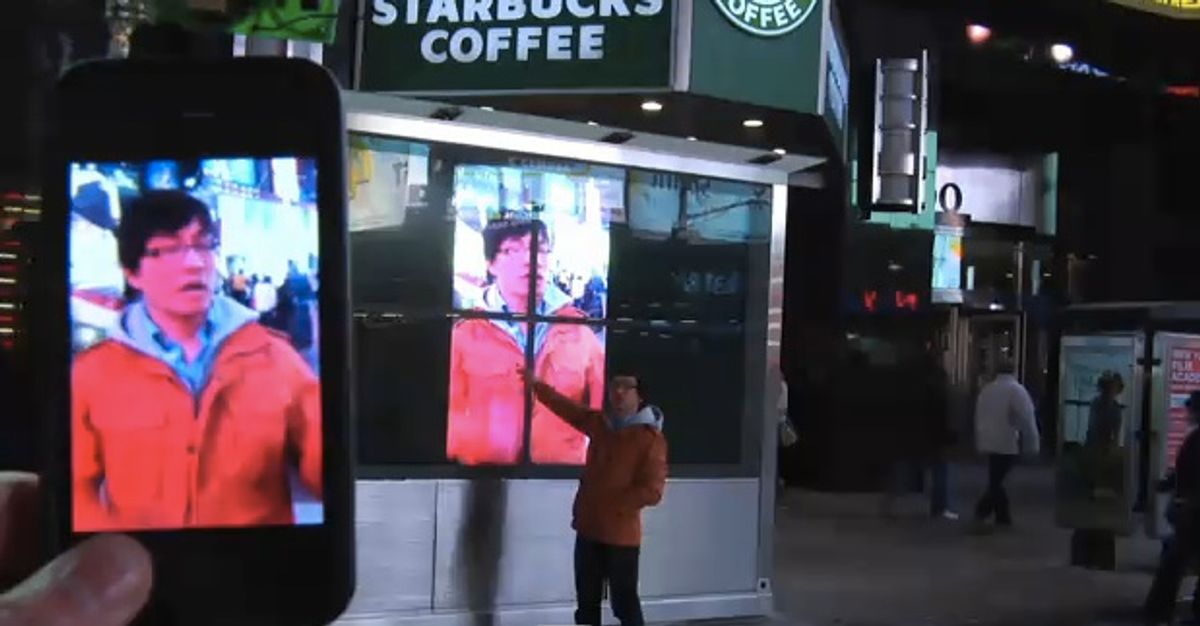 In a video uploaded to YouTube yesterday, a man in a red jacket stands in front of a giant video billboard in Times Square. His friend records him on an iPhone. And then – like magic – the man's image appears in place of the model in the ad. The man then proceeds to take a giant red balloon, tie a transmitter on it, and send it floating towards one of the 50-foot ads for Piers Morgan Tonight. As soon as the balloon hits the same airspace as the video screen, the same thing occurs and the man stares down at us from his giant TV.

Brilliant? Dangerous? Is this even real? According to the user who uploaded the video, BITcrash44, the whole process was relatively simple:

the way it works is pretty simple: plug in my transmitter into the iphone 4 and play back any video clip. you can play it through the ipod feature or through the camera roll. the transmitter instantly sends the video signal to the video repeater and the video repeater overrides any video screen that it's being held next to. it doesn't matter what shape or size the hacked screen is because the hack video will simply keep its correct dimensions and the rest of the hacked space will stay black.

Of course, since this is the Internet, people were immediately skeptical. Joe Coscarelli of The Village Voice writes:

DesignYouTrust.com, one site that posted the YouTube video, is currently down, but when one Twitter user saw the clip, he automatically doubted it, based largely on the surrounding website (see update below). "As cool as that looks, it's a hoax," he wrote. "The focus on video effects on the rest of the site is pretty sufficient proof."

If this was a hack though, it was done with some amazing special effects. Sending this video around to colleagues at Salon, we finally received confirmation: there was no way this video could be real. Salon TV writer Matt Zoller Seitz spotted the hoax immediately.

To make it real you would have to be an unsecured wireless network that you could intercept with your magical video hack sparkplug transmitter thingy.

He was right. Video advertising billboards can be changed through wireless technology, but that they have to go through a billboard computer first, which would require security codes at the very least. It is possible someone could hack into those computers, but it would require more than just a transmitter and a balloon.

Still, it was a sophisticated hoax, which is almost as good as a clever hack. At the very least, someone should give this guy a job doing post-production work.