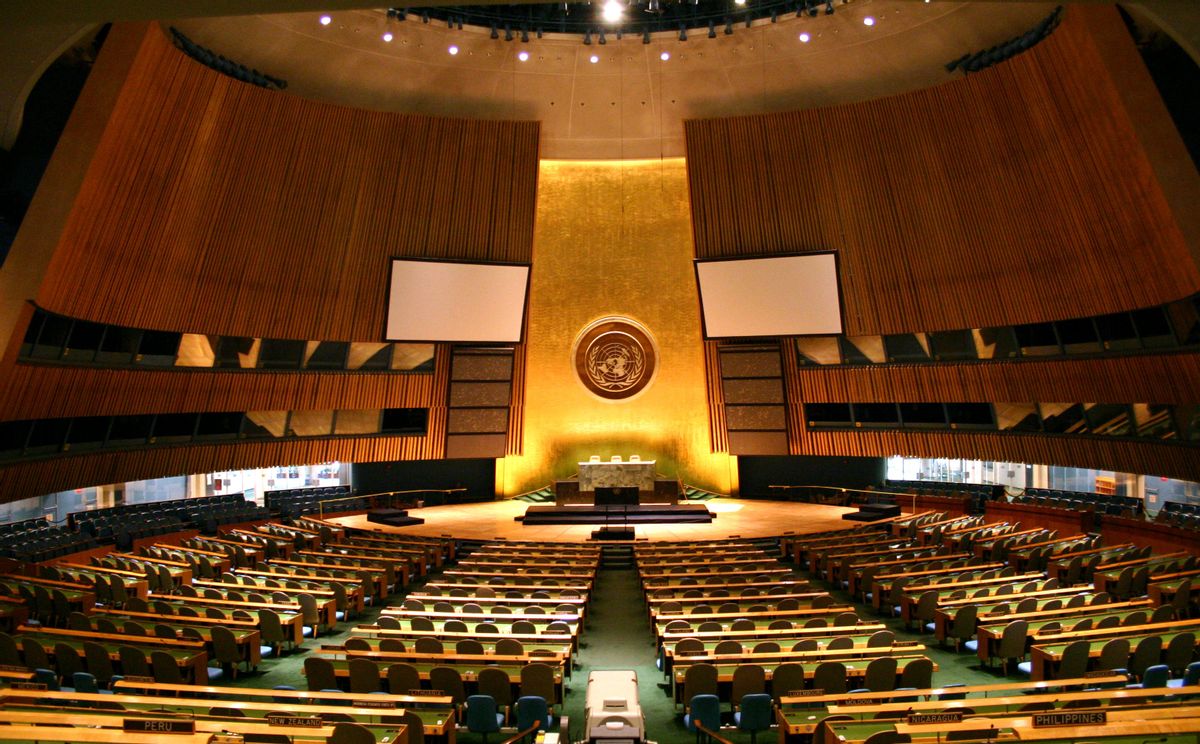 Security Council supporters of a no-fly zone over Libya were working Wednesday to persuade the group's more reluctant members to back a U.N. resolution aimed at stopping Moammar Gadhafi's planes from bombing civilians.

The Obama administration said it wouldn't block other nations from building support for the vote. However, there is a growing consensus in the White House that it's too late for a no-fly zone to have an effect in hampering Gadhafi, according to The New York Times, as the dictator's forces prepare to launch an assault on the rebel capital of Benghazi.

President Obama met with his National Security Council on Tuesday to consider a variety of other options to respond to the deteriorating situation.

Among those options are jamming Libyan government radio signals and financing the rebel forces with $32 billion in Libyan government and Qaddafi family funds frozen by the United States. That money could be used either for weapons or relief. The meeting broke without a decision, the official said.

While Russia and Germany were expressing doubts about the vote, France was pushing for rapid action with Foreign Minister Alain Juppe saying in Paris that several Arab countries have pledged to participate in possible military action in the North African country.

Juppe wrote on his blog Wednesday that France and Britain have sought targeted air strikes for two weeks and said two conditions are necessary: a Security Council mandate for such force and "effective" participation by Arab states. "Several Arab countries assured us that they will participate," Juppe wrote, without elaborating.

Lingering doubts among some members over a no-fly zone were immediately apparent after a proposed resolution was introduced Tuesday afternoon in the 15-member U.N. Security Council. Britain's U.N. Ambassador Mark Lyall Grant said council members will discuss the proposed resolution "paragraph by paragraph" when they meet Wednesday because members had "a number of questions about the text."

Chinese Ambassador Li Baodong said issues to be clarified include whether the ban would apply to all flights countrywide. Indian Ambassador Hardeep Singh Puri said he and other members need to know what countries would contribute the assets for enforcing a no-fly zone.

Lebanon, the Security Council's only Arab member, introduced the no-fly provisions of the draft resolution -- strongly endorsed by the Arab League -- to council members at a closed meeting Tuesday afternoon. The Arabs are strongly backed by France and Britain, which drafted elements of a no-fly resolution last week.

"We are deeply distressed by the fact that things are worsening on the ground, that the Gadhafi forces are moving forward extremely quickly, and that this council has not yet reacted," France's U.N. Ambassador Gerard Araud told reporters as he headed into the council's Tuesday meeting.

France and Britain failed to win support for a no-fly zone during a two-day meeting of Group of Eight foreign ministers in Paris earlier Tuesday and the G-8's final communique did not mention a flight ban. It instead warned of unspecified "dire consequences" if Gadhafi did not honor the Libyan people's claim to basic rights, freedom of expression, and representative government.

The halting efforts to raise pressure against Gadhafi's 42-year regime came as his forces used tanks, warships and artillery Tuesday to gain ground near the rebels' base in eastern Libya.

Lebanon's U.N. Ambassador Nawaf Salam said the section on the no-fly zone was drafted in consultation with Libya's U.N. diplomats, who have denounced Gadhafi and back opposition forces. Salam said another section on "the strengthening and widening of sanctions" on Libya was introduced by Britain.

The Arab League called Saturday on the U.N. "to shoulder its responsibility ... to impose a no-fly zone over the movement of Libyan military planes and to create safe zones in the places vulnerable to airstrikes."

The Security Council on Feb. 26 imposed an arms embargo on Libya and ordered all countries to freeze assets and ban travel for Gadhafi and some close associates. It also referred the regime's deadly crackdown on protesters to the International Criminal Court, for an investigation of possible crimes against humanity.

U.N. diplomats said the proposed new resolution would call for more muscular enforcement of the arms embargo, add names of individuals, companies and other entities to the list of those subject to travel bans and asset freezes, and ban commercial flights bringing arms or mercenaries into Libya.

The draft resolution would also authorize states to work together to provide humanitarian assistance and take necessary measures to protect civilians. It also would establish a panel of experts to monitor implementation, the diplomats said, speaking on condition of anonymity because the text has not been released.

Lebanon's Salam insisted that a no-fly zone "in no way could qualify as a foreign intervention."

"I would hope that the establishment of a no-fly zone would have a deterrent effect on the Gadhafi regime, not to fly its airplanes to attack civilian areas," he said.

The White House said President Barack Obama on Tuesday instructed his national security team to "fully engage" in discussions at the United Nations, NATO and with countries and organizations in the region when reviewing options to increase pressure on Gadhafi.

Obama and his top national security aides have been cautious with calls for a no-fly zone, which the Pentagon has described as a step tantamount to war. The U.S. fears it could further strain its already stretched military and entangle the country in an expensive and messy conflict.

Associated Press Writers Edith M. Lederer at the United Nations, Jamey Keaten in Paris, and Ben Feller in Washington contributed to this report.