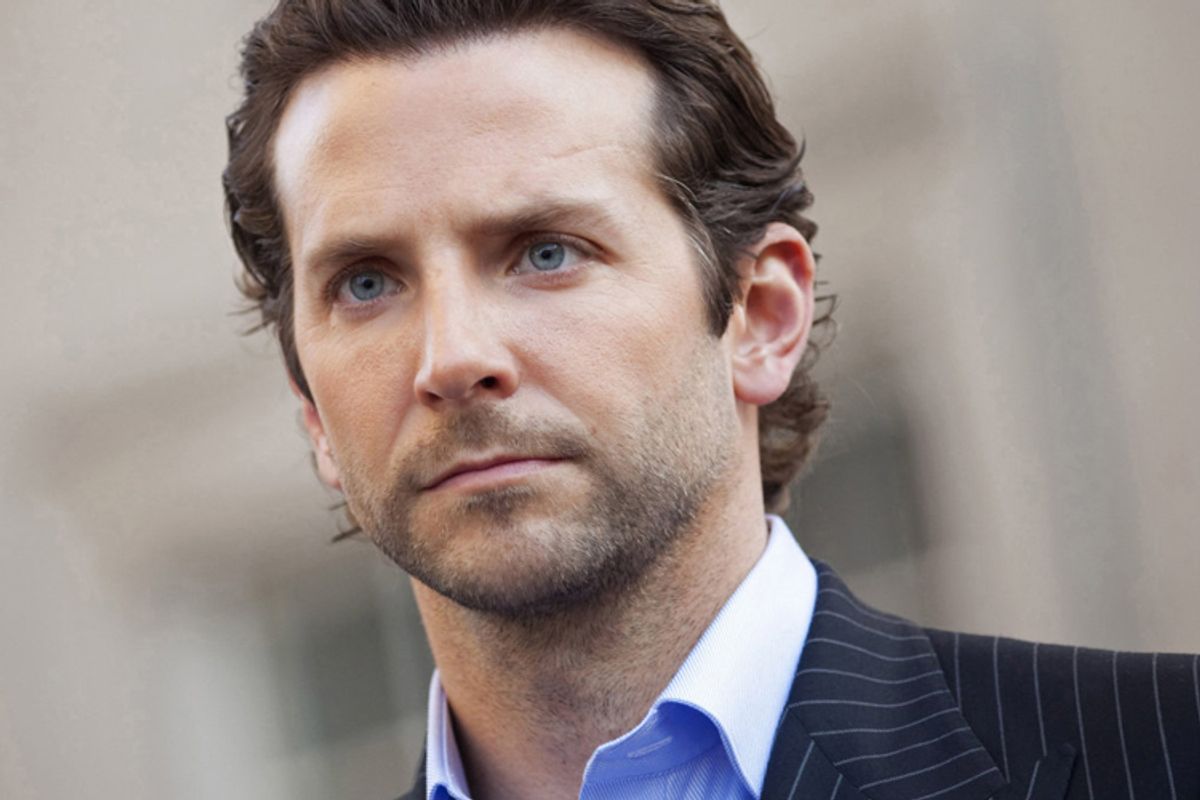 Screenplays for Hollywood movies have to be written by somebody, right? And that person could technically be described as a writer. Yet somehow the institutional contempt that the movie business has always felt toward its writers inevitably leaks onto the screen, and we get pathetic losers like Eddie Morra, the wannabe novelist played by Bradley Cooper in "Limitless," which begins as pseudo-realism before descending into weird and mangled wank-job fantasy. Unkempt, unwashed and unlaundered, Eddie sits around his squalid apartment in New York's Chinatown pretending to write the novel for which someone (preposterously) has given him an advance, or goes out drinking in bars where he can't even explain his book's basic premise to a bunch of befuddled working-class mugs. (From the looks of things, he must take the train to Long Island to go drinking, since the beefy proletarian types he encounters are in short supply in lower Manhattan's watering holes.)

Eddie's perky blond girlfriend Lindy (Abbie Cornish) gives him the heave-ho, although they never seem much like a plausible couple in the first place. His publisher wants the advance money back, and Eddie knows it's only a matter of time before he's back in his childhood bedroom in New Jersey, selling dental equipment for his dad. Then the skeezeball drug dealer who used to be his brother-in-law (Johnny Whitworth, briefly lending some life to the proceedings) gives him a teeny little gelcap, which he claims is an FDA-approved drug making its way to the marketplace. And then: Jumpin' Jiminy, it's Christmas in Joo-ly. Eddie bangs the cute Asian landlady to whom he owes three months' back rent (and numerous other young ladies besides), writes a brilliant novel, learns to speak several languages and becomes a post-Gordon Gekko financial whiz, all apparently before lunchtime the next day. More important still, he gets a $300 haircut and a bunch of high-end designer suits, making him look like far more of an asshole than he did when he was just a garden-variety pretentious failure.

Here's the problem with this reprehensible but moderately entertaining movie, or at least here's a way to get a grip on its many problems: NZT, the super-secret blend of chemicals that turns Eddie into a hyper-intelligent Nietzschean Superman, with total recall of everything he's ever seen, read or heard and powers of observation well beyond that of ordinary mortals, is pretty much the only thing that ever makes "Limitless" fun or interesting. (Yes, that does sound too close to AZT, a well-known anti-HIV drug, and I can't imagine why they chose to go there, except that this movie's veneer of knowing slickness is more than canceled out by a thick, fatty layer of stupidity.)

Dosing up on NZT seems to be like doing cocaine, crystal meth and a shot of espresso all at the same time, then topping that off with half a bottle apiece of Ritalin and top-shelf tequila, and having the buzz last for 12 hours instead of promptly resulting in unconsciousness and/or death. As Eddie muses, it's "a drug for people who want to be more anal-retentive." It's like Scientology in pharmaceutical form. Director Neil Burger, cinematographer Jo Willems and their effects team come up with a tremendously cool look for Eddie's drug highs, enriching the color palette and sending us whooshing through the streets of Manhattan at warp speed or through the synapses of Eddie's brain. At some moments, "Limitless" is like a dumbass American version of Gaspar Noé's hallucinogenic "Enter the Void," with a lot less Tibetan Book of the Dead and a lot more spankin'-the-monkey boy fantasy.

When Eddie's not conquering the world, though, we've got an entirely ordinary rise-and-fall and/or what-doth-it-profit-a-man fable, full of chicks, fancy restaurants, Puerto Vallarta vacations, Russian mobsters and other sinister assailants, and a thoroughly unnecessary and uninteresting supporting performance from Robert De Niro, as a crotchety, Warren Buffett-esque financial tycoon. (Seriously, Bobby: I know the transition to being a late-career character actor is tough, but what are you doing? Picking directors out of the L.A. white pages?) Eddie discovers that the drug has unexpected side effects, including extended blackouts and possible acts of violence, and that nearly everybody else who has taken it has wound up dead. Indeed, "Limitless" begins with a near-literal cliffhanger, as Eddie tells us his story from a ledge outside his luxury apartment building while a bunch of the aforementioned Russian mobsters take a power saw to his steel security door.

But Burger and screenwriter Leslie Dixon (adapting Irish novelist Alan Glynn's "The Dark Fields") lack the conviction or the conventional wisdom or whatever you want to call it to stick with that model either. In fact, I'm guessing that "Limitless" was rewritten late in the process at the producers' behest, since all those plot elements get recklessly pitched overboard as part of a nonsensical conclusion that reasserts the mood of permanent masturbation. Like the abysmal alien-attack flick "Battle: Los Angeles," this movie is meant as porn-fantasy chicken soup for the wounded American soul. We apparently live in a rapidly declining imperial power whose citizens are fatally divided as to politics but share a singular worldview: that they are all destined to become rich and famous. "Limitless" suggests that you don't need talent or hard work or a lightning strike of good luck to do that.

Take the right pill, and you too will be bantering with waiters in Mandarin, discussing Shakespeare's sonnets on the dance floor, wreaking masterful kung-fu vengeance on subway assailants, making millions of dollars a week and shagging skinny French babes in the powder room (in whatever order you favor those things). After Eddie becomes a celebrity pursued by shadowy thugs and New York Post reporters, he hires a pair of beefy security guards, telling them drily: "Wear different colored suits. This isn't 'The Matrix'!" He's wrong about that; this is a version of the Matrix where Neo decides to stay forever, because of all the awesomeness.

There's a further problem with this movie's attempt to turn Bradley Cooper into a movie star, which I'll try to put delicately: He kind of looks like a dick. Cooper is a talented actor, with all the New York theatrical training you could want, and an adept physical performer. He's well established in comedy after "The Hangover" (with the sequel on the way), and has starred on TV in "Nip/Tuck," "Alias" and "Kitchen Confidential." He's certainly a distinctive-looking guy, with big, vulpine features and close-set, startlingly blue eyes. But I respond to Cooper as if he were trying to sell me a Yugo dealership or a condominium that's beneath the waters of the Great Dismal Swamp. That's oddly appropriate to this role, although I don't think it's on purpose: Eddie Morra seems like a mendacious creep as a failed writer, whose personality is not improved by wealth, power, Ermenegildo Zegna suits and supreme studliness. If there were some kind of lesson to be gleaned from this mendacious film ... but forget it, there isn't.