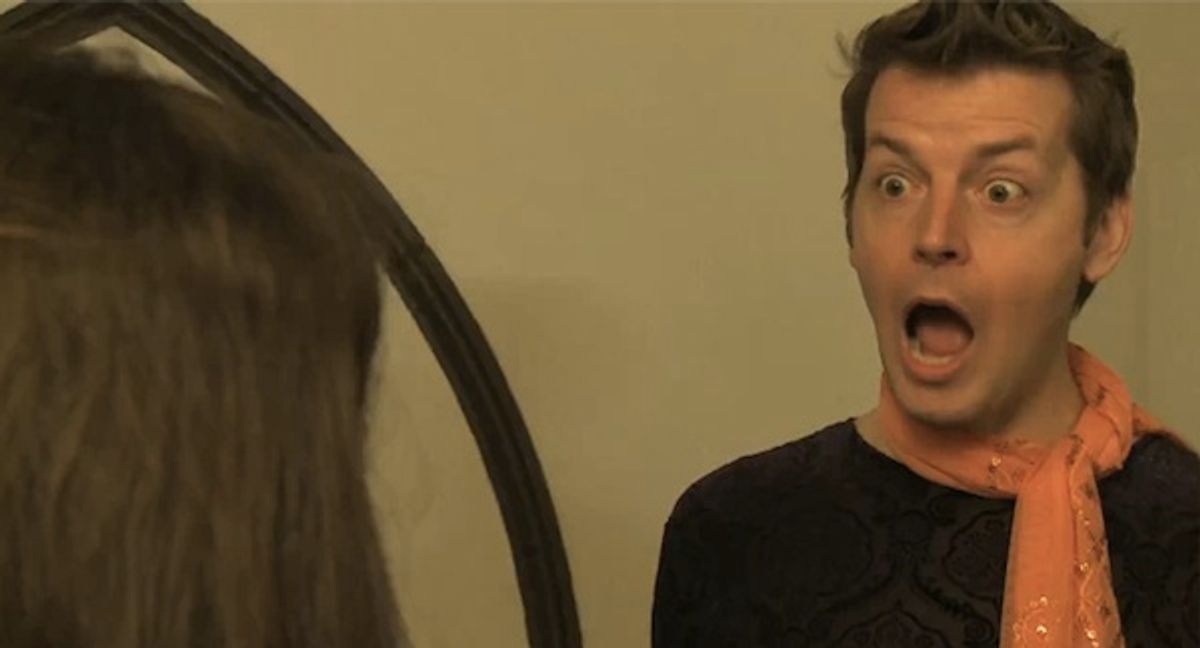 Do you have a gay best friend who gives you fashion advice and tells you when you're being a stupid bitch? Well, why not? Gay men have been the hottest accessories for straight women ever since "Will and Grace" made neutered homosexuals safe for prime time, and according to a Web series by Chicago's comedy troupe Second City, some of the most famous women in literature would have been better off with their own Sassy Gay Friend.

The Sassy Gay Friend is a character played by comedian Brian Gallivan who pops up in the lives of Shakespearean characters like Ophelia, Juliet and Lady MacBeth (and more recently, Nina from "Black Swan") to save them from their impending doom with his signature catchphrase, "What, what, what are you doing?" (His exit line is also the same in every episode, chiding the woman that she is "a stupid bitch.")

Here he is, saving Juliet from killing herself by telling her, "I think you're 14 and you're an idiot. You took a roofie from a priest":

And here, talking the Giving Tree out of her "abusive" relationship with the boy:

While these videos are funny (really, really funny, actually), they exist in an uncomfortable space where you aren't sure if the character of the Sassy Gay Friend is a commentary on how our modern culture views homosexual men and their fag hags by contextualizing it in a historical setting, or if they were just banking on a gay stereotype to get laughs, like Jack from "Will and Grace." As Thomas Rogers wrote in his article "Ladies: I'm Not Your Gay Boyfriend," this secondary form of humor doesn't embrace gay culture as much as laugh at it:

It's ["Will and Grace"] turned what was once a special relationship between two cultural outsiders -- gay men and the straight women who love them -- into an eye-rolling cliché.

...In the past decade, gay men have become less defined and ghettoized by our sexuality than ever before, making terms like "fag hag" feel as retrograde as, well, "Will & Grace."

Gallivan responded to criticisms of stereotyping from the LGBT community in an article for Edge Philadelphia:

But Gilbert's argument doesn't touch on perhaps the biggest problem with the stereotype: Many gay men just are not outlandish "La Cage Aux Folles"-types.

Meanwhile, a similarly titled new Web show is out there subverting all those traits defined by Gilbert's character. "Disappointing Gay Best Friend," created by Tyler Coates and Mikala Bierma, portrays the relationship between a woman and a much different kind of homosexual man:

In "Disappointing," it is the woman (who represents all those "Sex and the City"-styled, self-declared fag hags that Thomas refers to in his article) whose expectations clash with the reality of her friend's true persona. She bought into our culture's portrayal of gay men as fun-loving party monsters so wholeheartedly that she's blinded to her friend's barely concealed disdain and disapproval for all the markers that make up that stereotype: He's not into fashion, doesn't want to go out and dance because he's just ordered Thai food, and couldn't give a crap about Lady Gaga. Essentially, the Disappointing Gay Best Friend is only disappointing because he's not gay enough, and thus indistinguishable from a straight guy. And hey, if a girl wanted someone whose only comment about her outfit was that "it doesn't make you look fat," she may as well get a boyfriend. Right, ladies?