We have no one to blame for celebrity hackers but ourselves

As Scarlett Johansson and Miley Cyrus fight email leaks, we wonder: What's the difference between this and TMZ? 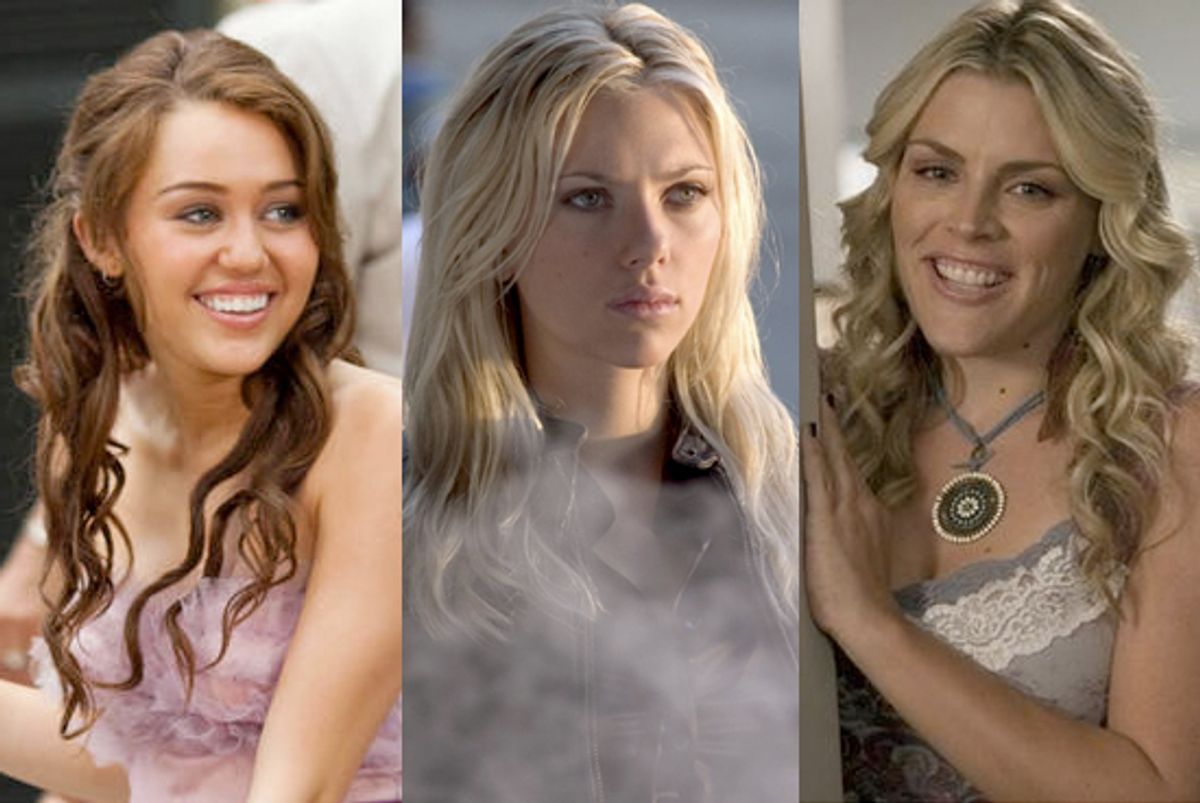 Miley Cyrus, Scarlett Johansson and Busy Philipps were all targeted by the hackers looking for nude pictures.
--

When naked photos of Vanessa Hudgens began surfacing on the Internet in 2009, the "Beastly" star sued the website that posted them, MoeJackson.com, claiming the photos were obtained by "unknown methods."  Which at the time, didn't strike anyone as particularly odd: Miley Cyrus, Rihanna, and Demi Lovato have all had friends or acquaintances leak photos of the stars either nude or posing suggestively. But this week even more photos of the young actress were being shopped around the Internet -- strangely, not even TMZ was tempted to buy them -- and were taken from the same batch as the originals.

As it turns out, Vanessa's not the only one perplexed about how private photos of her privates were suddenly all over the 'net. Scarlett Johansson had a nude photo of herself stolen from her iPhone, and now the FBI -- who became involved in this case once it was clear these photos were being taken straight from computers and phones, not frenemies or paparazzi -- are claiming that more than 50 stars might be victims of the same ring of computer hackers who target Gmail accounts to obtain the photos. The partial list obtained by the press include actresses Jessica Alba, Demi Lovato, Selena Gomez, Christina Aguilera, Ali Larter, Busy Philipps, Miley Cyrus, Emma Caulfield, Addison Timlin and Renee Olstead. Vanessa has already met with the FBI regarding the hacks, and the official statement from the bureau is that they are "very close" to catching the ringleader of the group.

Which makes us wonder: Where is the paparazzi during all of this? Hackers have essentially supplanted the jobs of the invasive photographers, getting titillating photos of the sometimes underage celebrities that paps could never get. And yet, our first thought whenever we see paparazzi shots of Lindsay Lohan having a meltdown or Justin Bieber holding hands furtively with his girlfriend Selena isn't "You poor things, having your privacy invaded like that," it's "Well, they are stars, what else did they expect?" So our reaction to these hacker photos should be the same (in fact, TMZ's story on Vanessa ended with a source telling the tabloid "Trust me ... Vanessa has learned her lesson," as if it were her fault that personal photos were stolen from her computer). But there is something misogynistic and perverse in the idea that female celebrities don't have the right to take nude photos of themselves. Are we going to say that young stars like Miley, Demi, and Selena shouldn't be outraged when their photos leak because they were "asking for it" by being famous and having the audacity to take a private photo? Should these women just cover themselves in burkas, wear bathing suits into the shower, and never have sex again, because if something does emerge they have no one to blame but themselves?

These hackers have become the extreme extension of our celebrity-obsessed culture, so blaming the stars for being naive enough to have personal items in their inboxes is easier than taking a look at what part we play in all this. We're the ones who keep sites like TMZ and Radar alive, who buy the tabloids and laugh at the pictures of Gwyneth looking frumpy in sweatpants while tsk-ing women like Kendra Wilkinson for making a sex tape (which we deserve to watch, by the way, since she made a sex tape, so what did she expect?). Lilit Marcus from the website Crushable.com explains that position:

"Think of how female celebrities can make a ton of money from Us Weekly and Life & Style for showing off their bikini bodies and talking about their diet tips. As a result, we blur the line about celebrity bodies and ownership."

And this is true, celebs do make money selling their bodies, in a sense. But if we're going to say that, because they've chosen this career for themselves they don't even deserve the decency of private email because they're famous, then we're just as bad as the hackers themselves. At least those guys know who they are and what they're doing, while we sit back from the safety of our own computers and judge both the hackers and the victims, silently and anonymously.