U.S. officials call initial bombings a success, but says its too early to define the campaign's ultimate objectives 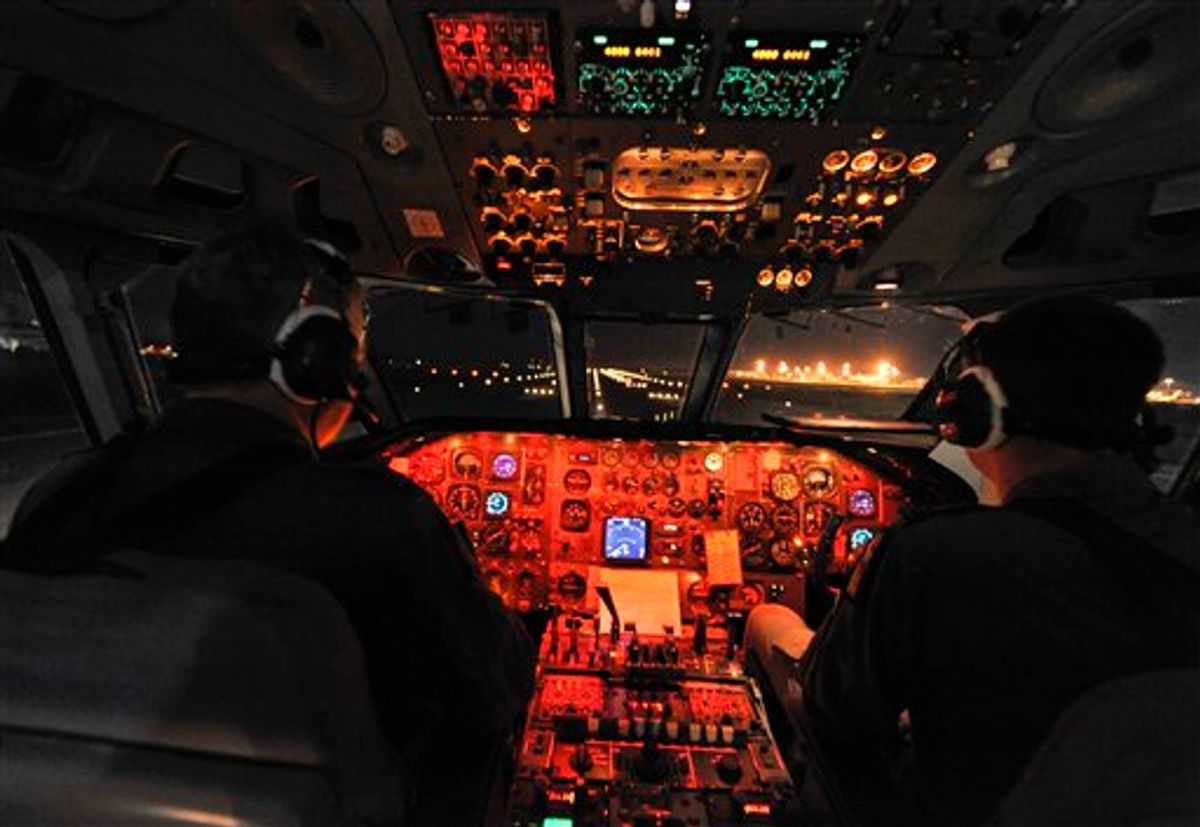 In this photograph made available by the Ministry of Defence, the Royal Air Force VC10 and Tristar air-to-air refuelling aircraft, from RAF Brize Norton, Oxfordshire, England, which supported overnight operations against targets in Libya, Saturday, March 19, 2011. They accompanied RAF Tornado GR4 fast jets from RAF Marham that struck Libyans air defences, in the longest strike mission since the Black Buck operations during the Falklands conflict. British Prime Minister Cameron said that launching a military action against Libya is "necessary, legal and right." Speaking after chairing an emergency meeting with senior government officials in his office in Downing Street, the leader said his thoughts are with British service personnel who are risking their lives to save others. (AP Photo/SAC Neil Chapman, MOD) EDITORIAL USE ONLY (AP)
--

The U.S. claimed initial success two days into an assault on Libya that included some of the heaviest firepower in the American arsenal -- long-range bombers designed for the Cold War -- but American officials on Sunday said it was too early to define the international military campaign's end game.

The top U.S. military officer suggested that Libyan strongman Moammar Gadhafi might stay in power in spite of the military assault aimed at protecting civilians, calling into question the larger objective of an end to Gadhafi's erratic 42-year rule. Other top U.S. officials have suggested that a weakened and isolated Gadhafi could be ripe for a coup.

A second wave of attacks, mainly from American fighters and bombers, targeted Libyan ground forces and air defenses, following an opening barrage Saturday of sea-launched Tomahawk cruise missiles. Pentagon officials said they were studying the extent of damage done and the need for further attacks.

One senior military official said the early judgment was that the attacks had been highly successful, while not fully eliminating the threat posed by Libyan air defenses. The official spoke on condition of anonymity to discuss intelligence data.

Sunday's attacks, carried out by a range of U.S. aircraft -- including Air Force B-2 stealth bombers as well as Marine Harrier jets flying from an amphibious assault ship in the Mediterranean -- demonstrated the predominance of U.S. firepower in the international coalition. By striking Libyan ground forces, coalition forces also showed that they are going beyond the most frequently discussed goal of establishing a no-fly zone over the country.

U.S. missiles and warplanes were clearly in the lead Saturday and Sunday, but U.S. officials say the plan remains for the U.S. to step back once the threat from the Libyan military is reduced.

Although the mission was predicated on Arab support, there was no reported Arab participation in the military strikes. Adm. Mike Mullen, chairman of the Joint Chiefs of Staff, said Qatar would be "in the fight" in the next day or two after moving unspecified military aircraft to within striking range. A call by the Arab League last week for a U.N. Security Council resolution authorizing a no-fly zone was a major driver of U.S. support.

President Barack Obama, traveling in Brazil, held a conference call Sunday with top national security officials, including Secretary of State Hillary Rodham Clinton, Defense Secretary Robert Gates and Army Gen. Carter Ham, the U.S. general running the air campaign on what U.S. officials have suggested is a temporary basis until an allied power can take over.

Gates had planned to fly to Russia on Saturday but delayed his departure for a day so that he could be in Washington to monitor the operation's launch.

Vice President Joe Biden discussed the military action by phone Sunday with the prime minister of Algeria and the emir of Kuwait, the White House said.

Pressed repeatedly to explain the mission's objectives, Mullen said in a series of interviews on the Sunday talk shows that the main goal is to protect civilians from further violence by pro-Gadhafi forces, while enabling the flow of humanitarian relief supplies. He said the first step -- imposing a no-fly zone -- had been achieved, with little worry of Gadhafi shooting down allied patrols. But it was unclear how long the military effort would go on, or on what scale.

"I think circumstances will drive where this goes in the future," the admiral said on ABC's "This Week." "I wouldn't speculate in terms of length at this particular point in time." He said early results were highly encouraging, with no known U.S. or allied losses and no reported civilian casualties.

"We're very focused on the limited objectives that the president has given us and actually the international coalition has given us, in terms of providing the no-fly zone so that he cannot attack his own people, to avoid any kind of humanitarian massacre, if you will, and to provide for the humanitarian corridors, humanitarian support of the Libyan people," Mullen added.

Asked whether it was possible that the military goals might be met without Gadhafi being ousted, Mullen replied, "That's certainly potentially one outcome." He described the Libyan strongman as more isolated than ever, adding that Gadhafi is "going to have to make some choices about his own future" at some point.

The prospect of Gadhafi remaining in control of at least a portion of the country raises questions about how far the Obama administration and its European and other partners are willing to go with military force. Clinton said on Saturday that although ousting Gadhafi is not an explicit goal of the campaign, his departure might be hastened as the conflict continues. Gadhafi has ruled Libya for more than 40 years.

Clinton said enforcement of the U.N. Security Council resolution that called on Gadhafi to cease firing on his own people will "make a new environment" in which people close to Gadhafi might turn against him.

"The opposition is largely led by those who defected from the Gadhafi regime or who formerly served it, and it is certainly to be wished for that there will be even more such defections, that people will put the future of Libya and the interests of the Libyan people above their service to Col. Gadhafi," she said.

If the ultimate outcome of the military campaign is cloudy, so is the command arrangement. The Pentagon said on Saturday that it is led by Ham, who as head of U.S. African Command is responsible for U.S. military operations in Libya and much of the rest of the continent. Officials have not said much about the plan to hand off responsibility for the military operation -- dubbed Odyssey Dawn -- to some other unspecified country or coalition.

Libya's claims of civilians among the dead from the strikes appeared to make Arab countries nervous, after the Arab League took the unprecedented step of calling for a no-fly zone. On Sunday, Arab League chief Amr Moussa criticized the missile strikes, saying they went beyond what the Arab body had supported.

"What happened differs from the no-fly zone objectives," Moussa told reporters in Cairo. "What we want is civilians' protection not shelling more civilians."

One of the more vocal skeptics in Congress, Sen. Richard Lugar, said he worries that the U.S. may have entered a conflict with unclear goals.

"We really have not discovered who it is in Libya that we are trying to support," the Indiana Republican said on CBS' "Face the Nation." "Obviously the people that are against Gadhafi, but who? In eastern Libya, for example, a huge number of people went off to help the Iraqis against the United States in a war that still is winding down."

Sen. Carl Levin, D-Mich., chairman of the Senate Armed Services Committee, said Sunday that the U.S. intends to take a back seat soon.

"After the air is cleared of any threat there is going to be a hand off to our allies and this mission will then be carried on by French, by British and by Arab countries, and that's very important," Levin said.

NATO is seen as possibly taking the command responsibility, but thus far it has not agreed.