The stars of "Tim and Eric" talk about their surprising latest venture: A soft rock collaboration 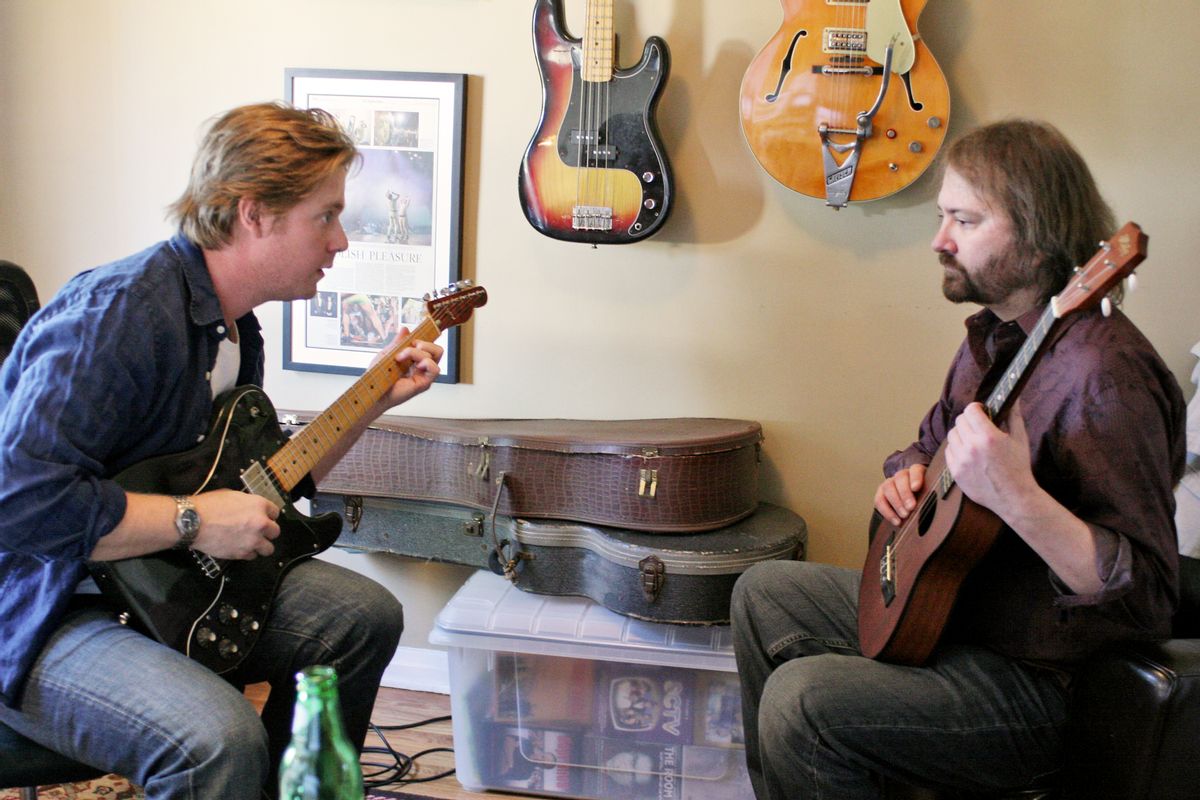 Simon & Garfunkel, eat your heart out
--

Two weeks ago, I wrote about the unexpectedly unaffected soft rock album "Starting From Nowhere," a collaboration from Tim Heidecker (of the absurdest comedy "Tim and Eric Awesome Show, Great Job!") and the series' composer, Davin Wood. The album, released last week, is such a marked departure from what we're used to seeing on "Tim and Eric" that it was almost a reaction against Tim and Eric Wareheim's public persona, in which the duo often show up to interviews in character (like their recent Conan appearance, which seemed to freak out even Coco). In phone conversations to both Davin and Tim, we discussed their reasons for making this album, a love of nonsensical rock lyrics, and the sincerity of comedy.

I've spent all day walking around listening to your song "A Song for My Father." I don't know if I'm hung over or what, but that song's really spoken to me today. It has this "Cat's Cradle" vibe to it.

Tim Heidecker: I found when I'm hung over I'm always a little extra emotional, a little depressed. I've been known to cry.

Davin Wood: I think Tim's mentioned before how that song comes the closest to something that's relatable to most people. There shouldn't be anything inherently silly about any of the melodies, but some of the lyrics have a little more humor to it. "A Song for My Father" is pretty sincere.

Do you think your fans are going to have a hard time relating to some of the more sincere parts of the album?

TH: I think some of them will. I think we have a wide swath of different kinds of fans, and a lot of them have taken it pretty well. They weren't expecting it, but I think the best thing we can do is present things our fans wouldn't expect. A lot of people, it's not the music they assumed we'd like.

DW: I think "Tim and Eric" fans in general have learned not to be surprised by anything.

DW: The sincerity is key, it's a necessity. It wouldn't be worth doing to just make fun of an era of music. It's just not that funny unless you actually have some love for it.

I notice a lot of these songs -- as soft rock ballads tend to do -- tell these stories with pretty cohesive narratives. Like "Weatherman" is about a car crash, "A Song for My Father" is about a boy and his dad, and "Life on the Road" is the classic tale of "the lonely life of an entertainer man." Do you approach these stories the same way you approach sketch writing?

TH: Each song was written so far apart from each other, either at a guitar or a piano. I don't think we ever thought, "We want to write a song about this," we just started toying around with the music. Sometimes it was just nonsense words, but early on we realized that all the songs had these cultural reference points to them. For "Life on the Road" we just thought of that classic entertainer: that pathetic, whining, "how hard is life" kind of rock star. So there is a process that goes into it, but it's not too deliberate.

DW: It was a really organic process, years in the making. Tim set up a little studio office in his house with a piano, and we had been working on a song, I think it was for Aimee Mann to sing for "Tim and Eric." (The song ended up as "Heart.") So during that session, we started messing around with this other tune (what eventually became "Weatherman") and it made us laugh, but we knew it would never be on the show. And it grew from there. We thought, "Hey, we should be doing more of this stuff," but it didn't really fit into the show's style of comedy. So whenever we had a weekend open, we'd just go over to Tim's and work on it. We'd invite people over to collaborate, which is how we ended up getting Rilo Kiley's Jason Boesel on drums, and their bassist Pierre de Reeder to produce the album. I can't speak more highly about them.

Tim, you went to Temple University, right? Did you find Philly had a really good underground soft rock scene?

TH: No, no, no. When I was in college in Philly, there was a lot of post-punks ... hardcore ... like, rock. Sixties, retro, proto-Strokes kind of bands. Nothing like this.

I think they're still around there, by the way, those proto-Strokes bands. But now they are post-Strokes.

TH: Ha, yeah. I was in a band in high school and college and I always had a love for music, but I didn't go to a conservatory or anything like that. I was fairly self-taught. My comedy and my music were always swapping out one for the other.

Do you feel that way now, like you are swapping out comedy, or the show, for this album?

It's a much subtler form of humor than the show. I think the funniest part of the album to me is that you start it off with this huge audience applause, and you're saying, "Thank you, thank you," before introducing "Cross Country Skiing." And when you're done it's like this swell of applause again, like you guys are Simon & Garfunkel doing "Concert in Central Park." And I thought, "Wait, did you guys even hold a concert, ever?"

TH: No, it was totally canned (applause). Everything is very staged, and that's a conceptual bit. Like, how pompous and pretentious can we be by starting our first track with cheering and applause? I think an early idea was that this band has been around for awhile, so you'd think to yourself, "Oh, when was this taped? Have I heard this before? Who is this by?" Just kind of throwing those questions out there.

To be honest, a lot of the bands that you're emulating in this album have pretty goofy lyrics anyway. Kind of inadvertently funny and overwrought.

DW: Oh, totally. I never knew if it was just me and I just misunderstood the lyrics, but when John Mellencamp sings, "Don't need to look over my shoulder to see what I'm after?" Uh, what? What does that even mean?

I was reading on Stereogum your list of favorite yacht rock songs, and you were saying how amazing and ridiculous the videos are for some of the songs that inspired "Starting From Nowhere." You and Eric Wareheim have both directed music videos before, do you have plans to do something for this album?

TH: No. I don't. Because it's so much money and time, and we're making a movie right now for "Tim and Eric."

TH: Yeah, the movie's in production right now, and I really wanted this record to be its own thing. I actually said on Twitter that if anyone wants to make a music video for any of these songs, by all means go ahead and I'll retweet you. I think other people could do a better job of making a music video of these songs than I could. I don't want to dress up in a corduroy suit and have to pretend I'm somebody ... it's a weird thing. It's not a character I'm doing, but it's sometimes not to be taken seriously.

DW: I can't think of a lot of visual imagery for these songs that wouldn't put it right in the clichéd category.

Maybe this goes back to what I was saying about your fans, but for the people out there who don't watch "Tim and Eric," who only know about you from that crazy interview you did for Conan or something ... what would you want them to know about this album?

"Starting From Nowhere" is available for purchase on Amazon.