The media's treatment of Charlie Sheen vs. Chris Brown

He gets heated after an interview about his arrest, and raises the question: Why were we so easy on Charlie Sheen? 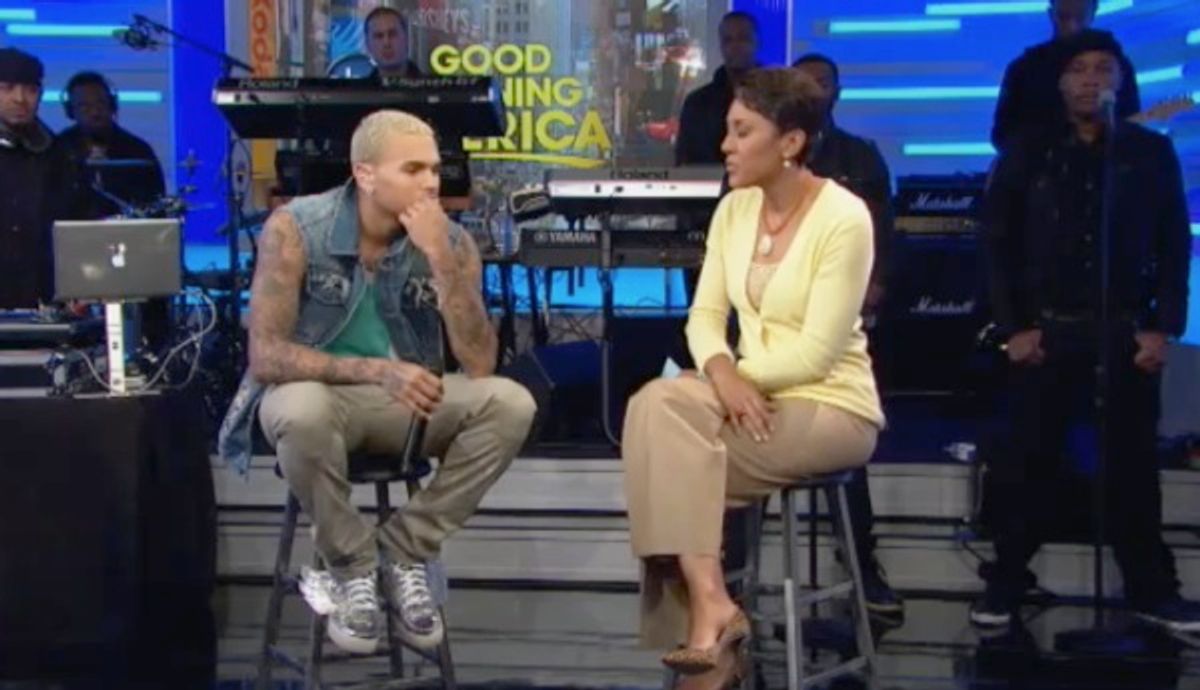 Chris Brown should be on top of the world. His new album F.A.M.E. dropped today, with already three No. 1 songs. It's also currently the most downloaded album on iTunes. So when Brown went on "Good Morning America" to talk to Robin Roberts, he was probably in a pretty good mood, and put on a game face to discuss his current status with Rihanna, his ex-girlfriend and pop star whom Brown assaulted before the Grammys in 2009.

But Robin didn't let the topic drop, and kept maneuvering their discussion back to the felony charges that Chris pleaded guilty to, along with the restraining order that the R&B star is trying to get downgraded. Chris struggled through the segment and then allegedly started getting violent: breaking the glass of his dressing room window, screaming, and ripping off his shirt.

While Brown's anger issues are certainly a topic for conversation, I just have to wonder: Where was this tough line of questioning when Charlie Sheen was on ABC? After all, the actor also pleaded guilty to assault charges on ex-wife Brooke Mueller and according to the police reports taken that night, it wasn’t the first time Sheen had become physically violent with her, previously throwing her to the ground and causing a head injury severe enough to require medical assistance. (Neither Mueller nor Sheen reported the incident at the time.)  And that wasn't the only incident. As Anna Holmes reported in the New York Times, Sheen's battery sheet -- only against women -- is a mile long:

In 1990, he accidentally shot his fiancée at the time, the actress Kelly Preston, in the arm. (The engagement ended soon after.) In 1994 he was sued by a college student who alleged that he struck her in the head after she declined to have sex with him. (The case was settled out of court.) Two years later, a sex film actress, Brittany Ashland, said she had been thrown to the floor of Mr. Sheen’s Los Angeles house during a fight. (He pleaded no contest and paid a fine.)...

Last October, another actress in sex films, Capri Anderson, locked herself in a Plaza Hotel bathroom after Mr. Sheen went on a rampage. (Ms. Anderson filed a criminal complaint but no arrest was made.) And on Tuesday, Ms. Mueller requested a temporary restraining order against her former husband, alleging that he had threatened to cut her head off, “put it in a box and send it to your mom.” (The order was granted, and the couple’s twin sons were quickly removed from his home.) “Lies,” Mr. Sheen told People magazine.

And yet when Sheen was doing his crazy-ass publicity tour, these items were barely touched upon, with interviewers like Piers Morgan and Andrea Channing not questioning Charlie's claims that he's never hit a woman. (Despite court orders and guilty charges that say otherwise.)

This comparison did not escape Chris Brown, who tweeted directly after the "GMA" incident:

Look, all domestic violence is terrible, and celebrities are not above being held accountable for their actions. But what a dark double-standard that Chris must continually answer for his actions, unable to be known as anything other than "the guy who beat up Rihanna," while Sheen gets a free pass, possibly because none of the women he hurt were famous enough to bother caring about.