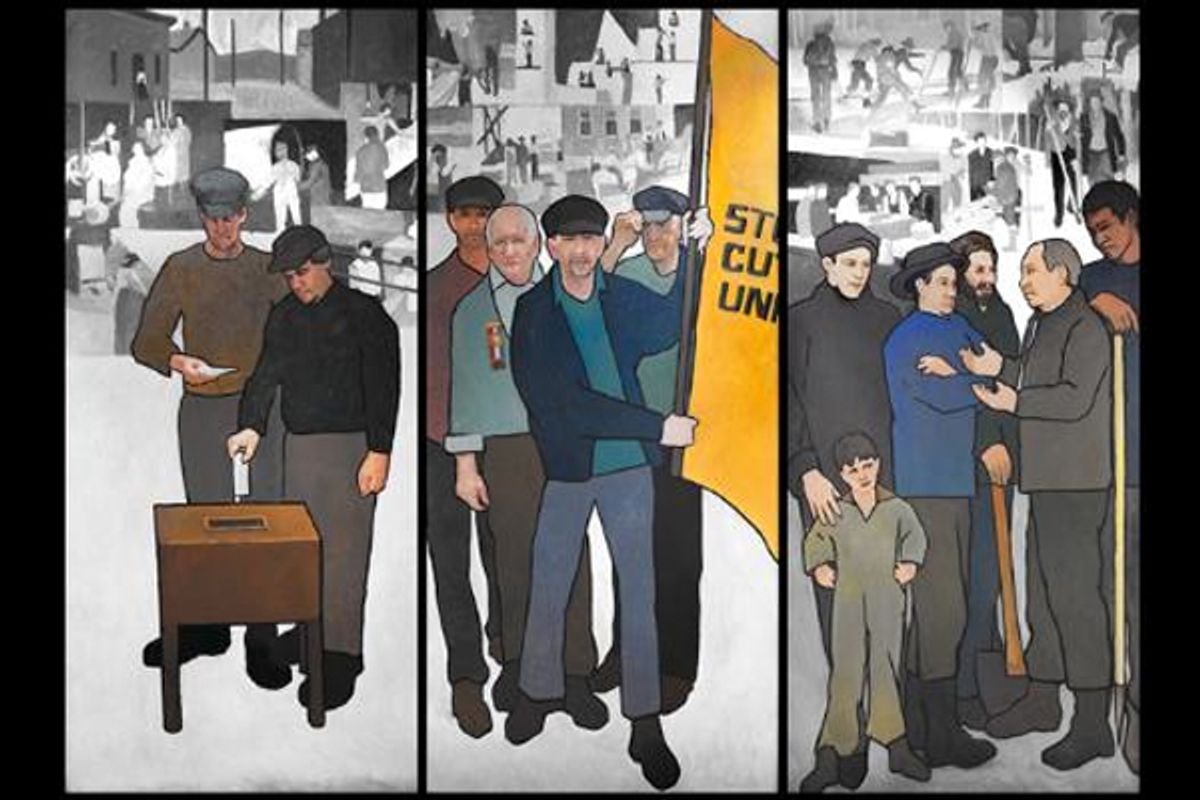 Maine Gov. Paul LePage has ordered state workers to remove from the state labor department a 36-foot mural depicting the state's labor history. Among other things, the mural illustrates the 1937 shoe mill strike in Auburn and Lewiston. It also features the iconic "Rosie the Riveter," who in real life worked at the Bath Iron Works. One panel shows my predecessor at the U.S. Department of Labor, Frances Perkins, who was buried in Newcastle, Maine.

The LePage administration is also renaming conference rooms that had carried the names of historic leaders of American labor, as well as former Secretary Perkins.

The governor's spokesman explains that the mural and the conference-room names were "not in keeping with the department's pro-business goals."

Are we still in America?

She and her boss, Franklin D. Roosevelt, came to office at a time when average working people needed help -- and Perkins and Roosevelt were determined to give it to them. Together, they created Social Security, unemployment insurance, the right of workers to unionize, the minimum wage and the 40-hour workweek.

Big business and Wall Street thought Perkins and Roosevelt were not in keeping with pro-business goals. So they and their Republican puppets in Congress and in the states retaliated with a political assault on the New Deal.

Roosevelt did not flinch. In a speech in October 1936 he condemned "business and financial monopoly, speculation, reckless banking, class antagonism, sectionalism, war profiteering."

Never before in all our history have these forces been so united against one candidate as they stand today. They are unanimous in their hate for me -- and I welcome their hatred.

Big business and Wall Street have emerged from the Great Recession with their pockets bulging. Profits and bonuses are as high as they were before the downturn. And they're spending like mad on lobbying and politics. After the Supreme Court's disgraceful Citizens United decision, there are no limits.

Pro-business goals are breaking out all over. Governors across America are slashing corporate taxes as they slash state budgets. House and Senate Republicans are intent on deregulating, privatizing and cutting spending and taxes so their corporate and Wall Street patrons will do even better.

But most Americans are still in desperate trouble. Few if any of the economic gains are trickling down.

That's why the current Republican assault on workers -- on their right to form unions, on unemployment insurance and Social Security, on public employees, and even (courtesy of Gov. LePage) on our common memory -- is so despicable.

And it's why we need a president who will fight for workers and fight against this assault -- just as Perkins and FDR did.

By the way, Maine's Gov. LePage may be curious to know that the building housing the U.S. Department of Labor in Washington is named the "Frances Perkins Building." He can find her portrait hanging prominently inside. Also portraits and murals of great leaders of American labor.

A short walk across the mall will bring Gov. LePage to an imposing memorial to Franklin D. Roosevelt, should the governor wish to visit.

Governor, you might be able to erase some of Maine's memory, but you'll have a hard time erasing the nation's memory -- even if it's not in keeping with your pro-business goals.