"Potiche": Deneuve and Depardieu, together again

A pair of 60ish French screen legends -- one in sweat pants, the other enormous -- reunite for '70s farce "Potiche" 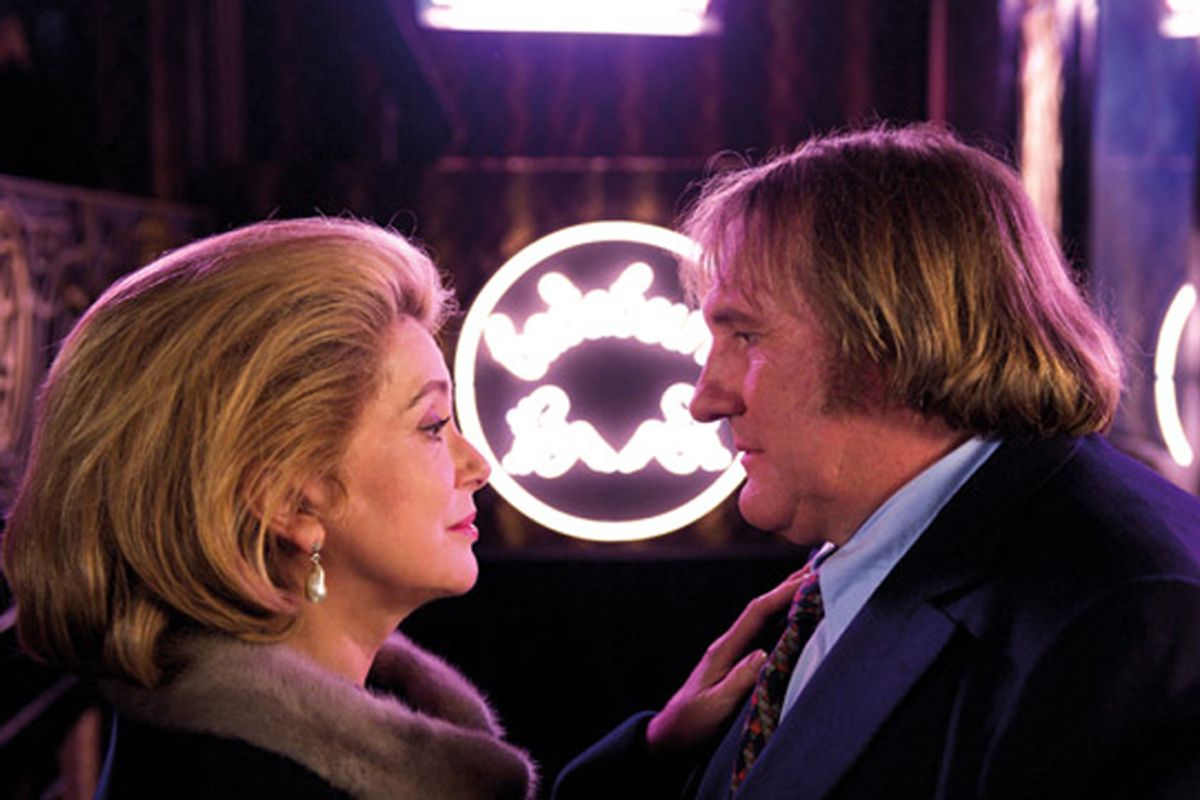 "Potiche" unites French screen legends Catherine Deneuve and Gérard Depardieu in a peculiar love-and-politics farce under the guidance of chameleonic director François Ozon, with results that are somewhere between delightful and disconcerting. If you know Ozon's work, there's nothing especially surprising about that. Best known to American viewers for the sexy thriller "Swimming Pool" and the doleful character study "Under the Sand," both with Charlotte Rampling, Ozon apparently delights in making every possible kind of movie, often several at the same time.

Here he adds a few ironic twists to a hoary 1970s stage farce, casting Deneuve as Suzanne Pujol, a trophy wife ("potiche," or knickknack) who winds up in control of the company owned by her nefarious but incompetent husband, played by comedy veteran Fabrice Luchini. Across town, burly Communist politician Maurice Babin (Depardieu) plots a proletarian insurrection against the Pujol umbrella-making empire -- but nobody except Maurice and Suzanne know about the buried passion in their past, or the unfinished business between them. Add bright colors, ludicrous period fashions and décor (the telephone handset cover! The tea cozy!), a scary neocon daughter (Judith Godrèche), a flamboyantly gay but closeted son (Jérémie Rénier) and a secretary with alarming bat-wing hair (Karin Viard) and it all adds up to an acrid pastiche that's often very funny but runs a little long.

As for the two leads, they have appeared together or separately in a high proportion of the greatest French films ever made. (I believe their first movie together was François Truffaut's "The Last Metro" in 1980.) Much of the edge in "Potiche" comes from the fact that they aren't quite who they used to be (and we're not either). Deneuve at 67 can still play women much younger than she is; Suzanne is probably meant to be in her mid-50s. She has transitioned to grande-dame status gracefully, and despite her legendary looks has never been vain about her roles. Here she wears a succession of silly outfits and a poofy hairdo meant to suggest the spoiled provincial bourgeoisie, and pulls it off with dignity. Time has actually been less kind to the 62-year-old Depardieu, who continues to work feverishly but does not look well. Never exactly svelte, he has gained an immense amount of weight since he appeared with Deneuve in André Téchiné's 2004 "Changing Times"; when we first saw Depardieu on-screen as Maurice, a ripple of unease went through the audience at the screening I attended. (Purportedly he has lost more than 40 pounds since making this film, and one can only hope some long-range plan is in view.)

Still, the director knows what we're here for, and partway through this arch and brittle farce Deneuve and the big fella step almost effortlessly through a sweet, silly and totally irresistible disco number, during a brief encounter at the shady nightclub Suzanne's husband never takes her to. Politics and gender may make Maurice and Suzanne historical adversaries -- Ozon tacks on a slightly forced p.c. conclusion about women's entry into political life -- but they'll always have the Bee Gees.