Scavenger: How my grandmother taught me to eat weeds

Maki showed me miner's lettuce during long rambles in the woods. Now, it's how I make a simple, cheap spring salad 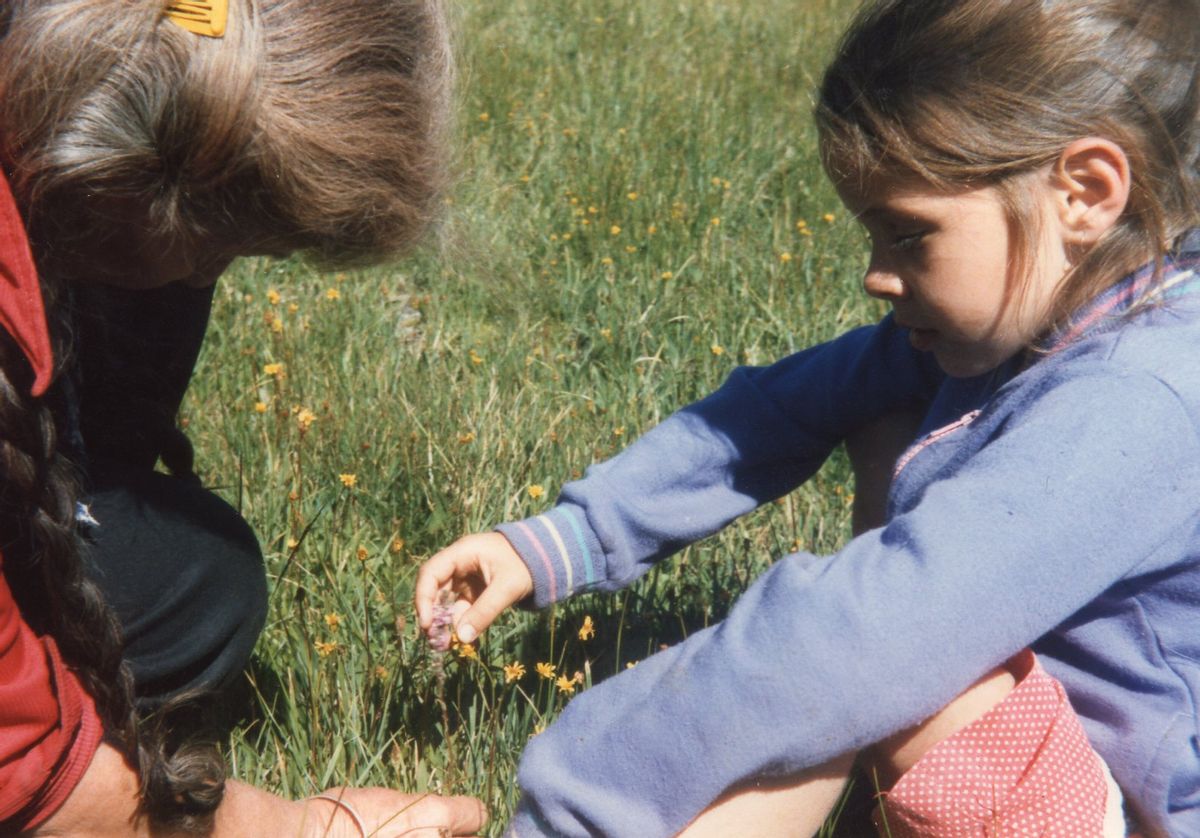 The author as a child with her grandmother
--

My grandmother Maki was the sort of person who was apt to have a conversation with her own sweater. It wasn't senility or schizophrenia, but rather an abiding and unspoken belief that all things -- animate and inanimate -- were possessed with souls. When her youngest son, Andy, grew too old for his stuffed tiger, Maki adopted it and carried it everywhere in her purse. Twenty years later, when I was a child, Tigger still lived in Maki's purse, as bedraggled as a drowned rat, his ears sewn back on with rough stitches, one of his green glass eyes hanging by a thread. Maki talked to him and for him, and to me he seemed as real as any family member.

My grandmother lived in a trailer, which she never properly cleaned. It smelled horribly of cat pee and moldering potatoes and Comet-choked drains. My dad would wait until Maki was distracted and he'd sneak in and attempt to clear out the clutter -- removing garbage bags full of water-stained biographies and mouse-chewed finery. Maki behaved as though every book, item of clothing, or bit of trash had a personality, but her deepest allegiance was to plants -- from the ratty African violet that lived on her windowsill to the majestic Douglas fir in the yard. She read a little bit of "Walden" every day for the same reasons that the truly devout read the Bible.

When I was very young and Maki was still reasonably spry, she'd take me on long rambles -- across the orchards or along the gravel road through the woods. As she stumped along with her twisted walking stick, she told me about the wild plants -- terrifying me with tales of children who ate poison hemlock and delighting me with trillium, and columbines, and bleeding hearts, which she insisted we call valentines ("Why on earth would you give such a pretty flower such an awful name?" she asked, stooping to gently touch the bruised-looking pink blossoms).

Spring beauties were perhaps her favorite flower ("Now that's an appropriate name," she said approvingly, pointing out the tiny veins of pink in the dainty white blossoms). She showed me that you could eat the spade-shaped leaves, which had a pleasingly fleshy texture. "Just don't pull up the whole plant," she said severely. For someone who loved flowers, Maki hated to see them picked and scolded me and my cousins if we tried to bring her bouquets of daisies or even buttercups.

As though influenced by the plants she communed with, Maki moved slowly. When my dad read me "The Lord of the Rings" and we got to the part about the ents, I immediately thought of my grandmother with her long hair like silver lichen and her habit of sitting outdoors for hours, alone and silent, as though drinking in the sun and the sky and the plants.

I moved away from the woods when I was 15, and I didn't come home to visit as much as I should have. Maki never reproached me. I'd arrive at her trailer to surprise her and she'd be sitting outside reading the comics or a biography ("I just like stories about people," she said) and she'd ask me, "Tell me about your life in the city."

I wish I'd moved back to Oregon while my grandmother was still alive. Instead, I waited until I had to -- the recession made my husband, Rich, and me painfully aware that we could no longer afford our effete urban lifestyle. Having grown up in rural Oregon, I knew that rent would be cheaper, garden space more ample, and that being away from the temptation of shops and restaurants and bars would help us conserve money. Rich agreed.

When we imagined a better quality of life, I think we were imagining summer in the country, not winter. And I know we weren't thinking about wet firewood, a leaking roof, invasive skunks, or pack rats, which look like chipmunks, sound like a claw-head hammer scraping at the inside of your walls, and are generally more destructive than your average human 2-year-old. It's been a long winter -- longer and damper and more broke than we imagined.

I've been looking for signs of spring, and last week I found one -- miner's lettuce or Claytonia perfoliata, otherwise known as spring beauties. Claytonia perfoliata is called miner's lettuce because miners ate it during the gold rush to prevent scurvy. It's rich in vitamin C, as well as vitamin A, and iron. The plant is native to the western United States, and can be found as far east as Ohio. The British, appreciating its vitamin-rich qualities, took seeds to Cuba and Australia, and back home to England, where it is now a common garden weed. It grows in moist shady spots, which pretty much describes my home.

While gathering Claytonia perfoliata and sorrel in the woods where we used to ramble, I remember my grandmother. I think also of the 49ers -- though I'm not exactly suffering from scurvy, these greens will be a fresh infusion to a rural winter diet that has been heavy on bread, beef and root vegetables. The plants aren't flowering yet, but the leaves are tender and succulent. In deference to Maki, I'm careful to snip leaves individually, instead of picking the whole plant. It takes about 10 minutes to gather enough greens for a salad, but time seems an appropriate tribute.

The miner's lettuce tastes like the woods, with a faint metallic undertone; the flavor is subtle, yet distinct. It's a nice base note to the sour yet delicate sorrel. I peel a carrot, and then use the peeler to make fine orange ribbons, which I add to the greens. Toss in a lime mint vinaigrette and garnish with sunflowers seeds; the salad is vivid and delicious. I've never quite been able to bring myself to consider a salad a meal in itself, but at an approximate cost of .29 per person (including dressing), it makes a nice accompaniment to my sandwich, which consists of an egg from my aunt's chickens, cheddar, mustard, mayonnaise and home-baked bread (approximate total cost = .39).

My grandmother taught me that there's more to the world than meets the eye. Given her personality and her consuming love for nature, it seems appropriate that reminders of her life come in the form of spring beauties: weeds, sustenance, harbingers of better times.