The heiress and the rapper discuss jail time, dreams and pet sharks 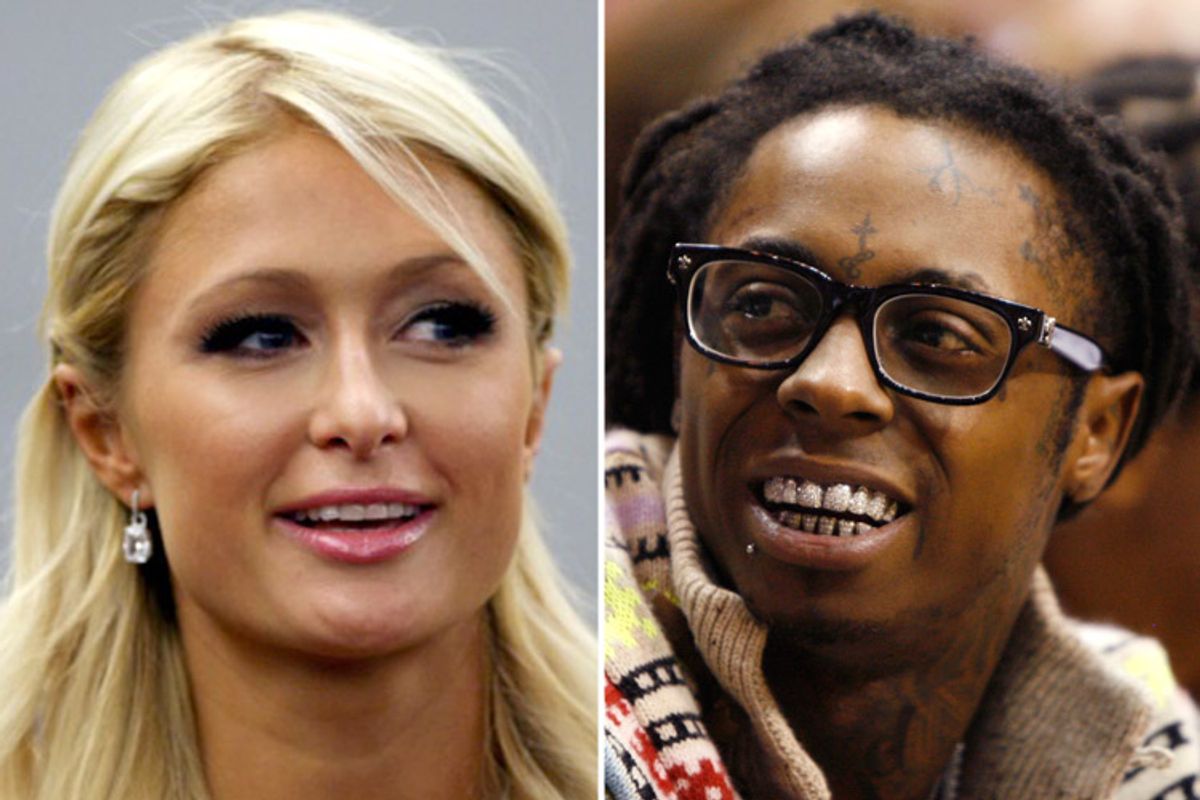 Whoever came up with the idea to have Paris Hilton talk to Lil Wayne for Interview magazine deserves an award. It's fives pages of the most hilarious Q&A ever printed, in part because  Hilton can't think of very good questions to ask besides "What's your sign?" Then again, she and Wayne may have more in common than we think: They both are musicians, they've both felt the cold hard steel of prison bars, and they both like Amsterdam.

Hilton's decision to do this piece may have been somewhat predicated on another interview, one recently unearthed by author Neil Strauss in his book "Everyone Loves You When You're Dead." During her time with Strauss back in 1999, Paris allegedly said, "I can’t stand black guys. I would never touch one," moments after making out with Vin Diesel, who is half-black. (Paris' people are now looking into suing Strauss.) And that's not the first time these allegations have surfaced: in 2009, Darnell Riley "Six Degrees of Paris Hilton" also painted a pretty unflattering picture when he chronicled the socialite saying the N-word on camera.

Paris must have learned her lesson, because she is like, super nice to "Wayne," despite apparently not knowing that much about him. Below, the five most surreal parts of this hard-hitting interview:

WAYNE: My favorite club in Miami is a club called LIV. It's in the Fontainebleau Hotel.

HILTON: Oh, I love that club.

HILTON: I had to do 24 nights in solitary. [Hilton was held in a separate cell as a safety precaution.]

HILTON: Yeah, I know how it is.

HILTON: How happy are you to have your freedom now?

HILTON: Yeah, I know how you feel. [laughs] It's the best feeling in the world when you come out.


On dreams and Amsterdam

HILTON: I love Amsterdam! It's so dope there. You can just ride a bike around. Do you ever dream? What are your dreams about?

HILTON: Do you have any pets?

WAYNE: I like animals, but I only have a few pets. I have a bunch of fish, and I have two sharks. Those are my dudes.

(DIMITRI) EHRLICH: How big are the sharks?

WAYNE: One is a little baby, so he's about a foot or two, or something like that. Then the other one is a good two, two and a half feet, or almost three feet.

EHRLICH: So do you have a huge pool for them? Or do they stay in a tank?

WAYNE: They live in a crib. I have this little water thing. It's like a little pond under the stairwell in my house. So they swim under there.