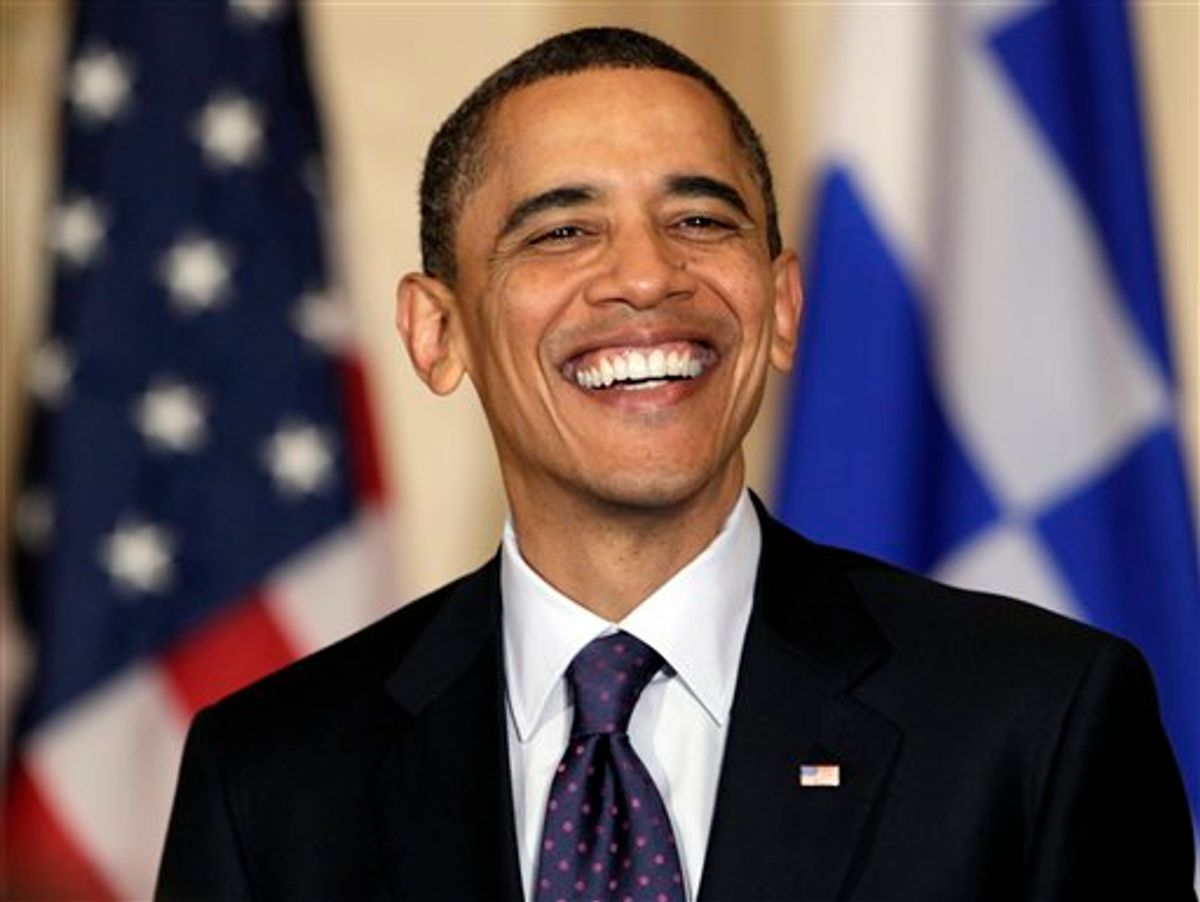 Numerous commentators have observed that President Obama's Libya speech last night rested on an affirmation of American "exceptionalism." That conviction, they contend, was expressed by Obama's appeal to "America’s responsibility as a leader" and by this claim: "some nations may be able to turn a blind eye to atrocities in other countries. The United States of America is different."

Steve Benen proclaimed that Obama's speech should put an end to the debate over whether he believes in America's exceptionalism: "the president wasn't subtle -- the United States isn't like other countries; ours is a country with unique power, responsibilities, and moral obligations." Andrew Sullivan observed that exceptionalism was "the core message of the President's speech" and that "he clearly believes in that exceptionalism - and now will live with its onerous responsibilities." Mark Kleiman announced that last night's speech exposed "one of the stupidest of right-wing talking points about Obama . . . that he somehow disbelieves in the exceptional nature of the American project" (though Kleiman also bizarrely equates that accusation with "the lie that Barack Obama does not love his country" -- as though you can't love your country if you don't believe in its exceptionalism).

Adam Serwer wrote: "After Obama's speech last night. . . anyone who alleges the president doesn't believe [in exceptionalism] deserves to be laughed out of town."  And the most enthusiastic praise for Obama's speech came from Bill Kristol in The Weekly Standard, who gushed that with this speech, "President Obama had rejoined -- or joined -- the historical American foreign policy mainstream" and "the president was unapologetic, freedom-agenda-embracing, and didn’t shrink from defending the use of force or from appealing to American values and interests."

It's long been obvious that Obama deeply believes in American exceptionalism, and I agree entirely with these commentators who say that last night's speech left no doubt about that conviction (not because he says he believes it in a speech, but because his actions reflect that belief). But what none of them say -- other than Kristol -- is whether they believe this to be a good thing. Does the U.S. indeed occupy a special place in the world, entitling and even obligating us to undertake actions that no other country is entitled or obligated to undertake? And, if so, what is the source of these entitlements and obligations? Is it merely our superior military power, or is there something else that has vested us with this perch of exceptionalism?

That the U.S. is exceptional is not, of course, some sort of unusual or marginal belief in American political culture. Quite the contrary: those who reject it are the ones who find themselves in the minority. Beginning almost immediately after 9/11, George W. Bush frequently asserted that America was "called" -- by whom he didn't say -- "to defend freedom." A Gallup poll from late last year found that 80% of Americans believe their country "has a unique character that makes it the greatest country in the world." There are very few political propositions which can command 80% support; that this one does shows just how much American exceptionalism is solidified as political orthodoxy in the United States.

The pervasiveness of this exceptionalism isn't really surprising. It's a common human desire to believe that one is special, unique, better than all others. Few people aspire to ordinariness. We view the world -- physically and mentally -- from our own personal perspective, and are inherently situated at the center of it. As tribal beings, we naturally believe that our customs and the beliefs with which we were inculcated from childhood are superior to Theirs. Personally, I've never understood how the following thought doesn't obliterate -- or at least severely dilute -- the conviction of one's exceptionalism:

But the desire to believe something is a powerful force, and this belief is thus extremely widespread.  Still, it's not a particularly appealing trait for an individual to run around hailing themselves "the greatest in the world," so it becomes perfectly acceptable -- mandatory even -- to nationalize this sentiment: "my country, the United States, is the greatest country in the world," and thus -- to use Benen's description of Obama's mindset -- "the United States isn't like other countries; ours is a country with unique power, responsibilities, and moral obligations" (This is not a question of whether one finds things to admire in America; just as one can appreciate one's own strengths without believing one is The Greatest in the World, one can appreciate attributes of American political life -- its domestic protections of free speech and press rights, its relatively integrated racial and ethnic diversity, its class mobility (as evidenced by two of the last three Presidents), its social progress -- without believing it to be The Greatest).

Exceptionalism can, of course, take different forms and result in different consequences. Notwithstanding Kristol's ecstacy over Obama's speech, Serwer insists that Obama's version of exceptionalism is different than the American Right's:

Conservatives seem to believe that American Exceptionalism justifies America doing whatever it wants in the world. By contrast, Obama — at least rhetorically — emphasizes that being exceptional is a standard to meet, not a license for America to capriciously enforce its will upon others. Where conservatives sometimes refuse to acknowledge that there are limits to American power, Obama acknowledged: "The United States will not be able to dictate the pace and scope of this change. Only the people of the region can do that."

That overstates the difference. The reality is that Bush never really acted alone; his attack on Iraq was joined by an international coalition larger than the one participating in Obama's war humanitarian intervention in Libya, and the last time I checked, Obama had no multilateral coalition or U.N. approval for his relentless drone attacks in Pakistan or covert bombings in Yemen. Stephen Walt argues, persuasively I think, that the only real difference between neocons and liberal interventionists is that the latter insist on legitimizing their wars through the U.N. while the former don't care to. But let's grant that there are some meaningful differences in how the Democratic and GOP versions of exceptionalism manifest.

The fact remains that declaring yourself special, superior and/or exceptional -- and believing that to be true, and, especially, acting on that belief -- has serious consequences. It can (and usually does) mean that the same standards of judgment aren't applied to your acts as are applied to everyone else's (when you do X, it's justified, but when they do, it isn't). It means that you're entitled (or obligated) to do things that nobody else is entitled or obligated to do (does anyone doubt that the self-perceived superiority and self-arrogated entitlements of Wall Street tycoons is what lead them to believe they can act without constraints?). It means that no matter how many bad things you do in the world, it doesn't ever reflect on who you are, because you're inherently exceptional and thus driven by good motives. And it probably means -- at least as it expresses itself in the American form -- that you'll find yourself in a posture of endless war, because your "unique power, responsibilities, and moral obligations" will always find causes and justifications for new conflicts.

It's a nice political point on the President's behalf to insist that he has proven his belief in American exceptionalism. That insulates him from a political vulnerability (i.e., from the perception that he rejects a widely held view), which is nice if politically defending the President is an important goal for you. But the harder -- and far more important -- question is whether this American exceptionalism that you attribute to him is actually true, whether it's well-grounded, and whether it should serve as a premise for our actions in the world.

For those in Boston and/or Providence, I'll be speaking next week at Harvard, Brown and the National Conference on Media Reform. Details on those events -- and other appearances in April -- are here.