With "Mad Men" on hiatus, star is free to take roles with girlfriend in Chekhov plays, indie films 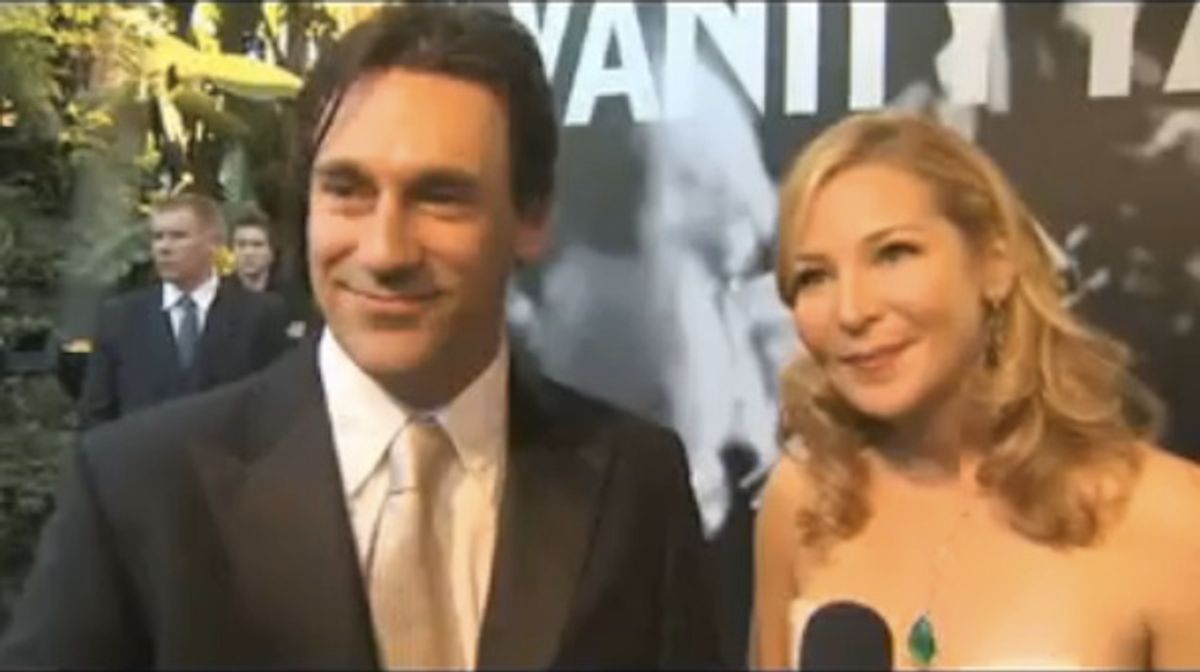 There is something oddly familiar about the relationship between "Mad Men" actor Jon Hamm and his long-term girlfriend, writer/director/actress Jennifer Westfeldt. Maybe it's the nostalgia factor that follows Hamm around even in contemporary settings, but seeing the two of them together on red carpets always makes me think of Richard Burton and Elizabeth Taylor, minus all the anger issues, and that whole "being married" bit.

Maybe a better comparison would be Sam Shepard and Jessica Lange: both famous in their own right, both low-key presences entirely devoid of tabloid drama, and yet completely compelling to watch together. Jon and Jessica just always look so in love, dammit. Not that I (or the thousands of other women who watch "Mad Men" for the, uh, costume design) begrudge them their happiness. If anything, they are a classy Hollywood throwback: what I imagine L.A. was like before Harvey Levin showed up.

Look at how lovely they are even while (seemingly) wasted during a pre-Emmys party in 2009!

And now that Hamm's show is on hiatus till 2012, he has time to devote to other acting endeavors. It will be hard to imagine Hamm as anyone other than Don Draper, despite the fact that the actor has proved time and time again that he's got a great sense of comedic timing that his uptight '60s alter-ego could only dream of. But if Hamm is worried about being typecast, he's certainly not letting it get in the way of spending more time with his lady love, both on the screen and on the stage. And what better way to transition from a 1960s stiff and suave ad guy than to take on the role of Colonel Vershinin in Anton Chekhov's "Three Sisters," a role he'll be playing opposite Westfeldt during a five-performance run at L.A. Theatre Works in April.

Vershinin shares many qualities with Draper: They're both idealists in soul-sucking jobs; they both enter into affairs with married women while married themselves; and they both love to give grandiose speeches about the nature of civilization. Shouldn't be too much of a jump for audiences to see Don in Vershinin, even if the text is a little more taxing than the usual carousal speech.

According to the show's producer, the casting of the real-life couple was serendipitous:

"Jon was my first choice for Vershinin -- the yearning, sexual repression. ... I thought he would be perfect for that...they were the first people I went to for these roles."

And what great timing, too! Now that Jon's got all this free time on his hands, what else is he planning on doing? Oh that's right, starring in Jennifer's third directorial feature, "Friends With Kids," a romantic indie comedy that's managed to line up major talent like Megan Fox, Adam Scott, Kristen Wiig and Maya Rudolph, and Ed Burns for its billing. As mentioned in a New York Time article this month the film does not yet have a distributor, though it does have a production company: Jon and Jessica's own Point West Pictures.

Maybe there is something to this whole "not getting married" business after all. Despite hundreds of questions about the subject, Jon's responses are still incredibly enigmatic:

"(Working together) makes me more cognizant of the challenges, which is a really, really evasive answer," he said.

"I don’t know what the future holds for either Jen or myself, but whatever it holds, I think we will handle it gracefully." And then, after a pause: "Hopefully."

Jon Hamm: making every other boyfriend in the world look bad since 1971.