Not quite an April Fool's joke, this imitation '70s road-sploitation flick is more arty anti-movie than spoof 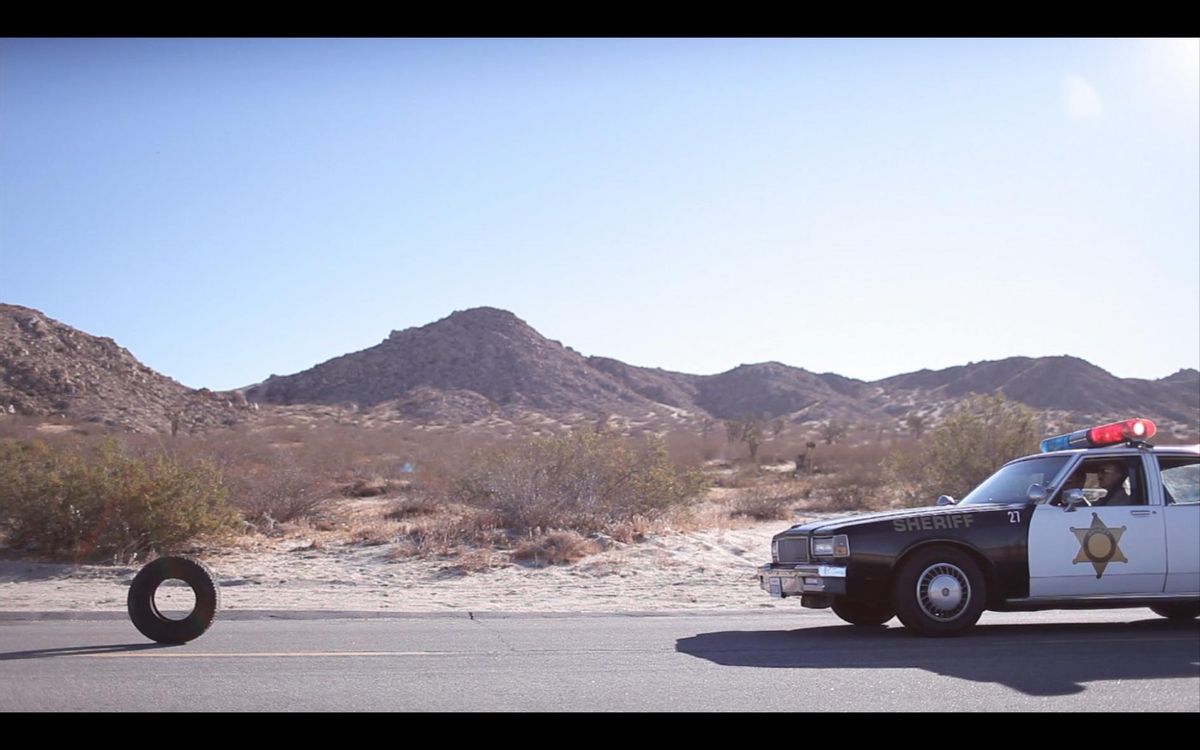 Yeah, "Rubber" is, to some degree, an imitation 1970s exploitation film about a killer tire who makes people's heads explode, after the fashion of the early David Cronenberg movie "Scanners." But despite what you may have been told on the Internet, it isn't quite a knee-slappin' romp and a high-spirited cultural pastiche, with lots of ho-ho-ho and hee-hee-hee. OK, we do see our vulcanized antihero rolling down a desert back road to the strains of the '70s smooth-soul hit "Just Don't Want to Be Lonely" (someone will want to know this: It's the Blue Magic version, not the higher-charting single from the Main Ingredient). That's pretty funny, but it comes with more edge than you'd expect. Perhaps that results from the scenes in which characters in the movie try to poison the audience, try to convince other characters that the story is a ridiculous fiction, or break the fourth wall to deliver lectures about the meaninglessness of cinema -- lectures that are themselves meaningless. Yeesh!

Yes, "Rubber" has "art up the butt," in the immortal phrase of a long-ago ex-girlfriend of mine. French director Quentin Dupieux is borrowing themes and tropes from '70s American cinema to make something that's more like a Godardian anti-movie than a laff-filled spoof. It's got actors, ranging from New York theater stalwart Stephen Spinella (as the lecture-delivering highway patrolman) to longtime action-movie villain Wings Hauser (as a crusty cuss in a wheelchair), and an episodic plot about the tire's lustful pursuit of a hot chick (Roxane Mesquida) in a convertible. But mostly it's got a barely tolerable level of metaness: an opening scene that resembles a conceptual art installation, circa 1983; a bickering audience who watch the killer-tire move around the desert through binoculars (and who are first starved and then poisoned by the filmmakers); and a nerdy, hostile intermediary (Jack Plotnick) who is neither a member of the cast nor the audience and reports to an unseen overlord.

It's almost impossible to criticize "Rubber," because Dupieux has inoculated himself against all possible complaints. I mean, arguably somebody should have told him that Americans say "vacation" instead of "holiday" and "garbage" instead of "rubbish." But on the other hand, the sloppy dialogue might be part of the self-undermining project, like the peeling patches on the cop uniforms or Spinella's sporadic attempts to convince the other actors to bail on the whole enterprise and go home. Whatever way you look at it, "Rubber" certainly isn't the same-old, same-old. It might be more fun to talk about, or describe to your friends, than to sit through, but on the most basic level it has fulfilled its aesthetic goals: It will irritate many and delight a few.