How I became a hillbilly

Once, I was a city slicker living beyond my means. Now, I live in the woods and make risotto with nettle broth 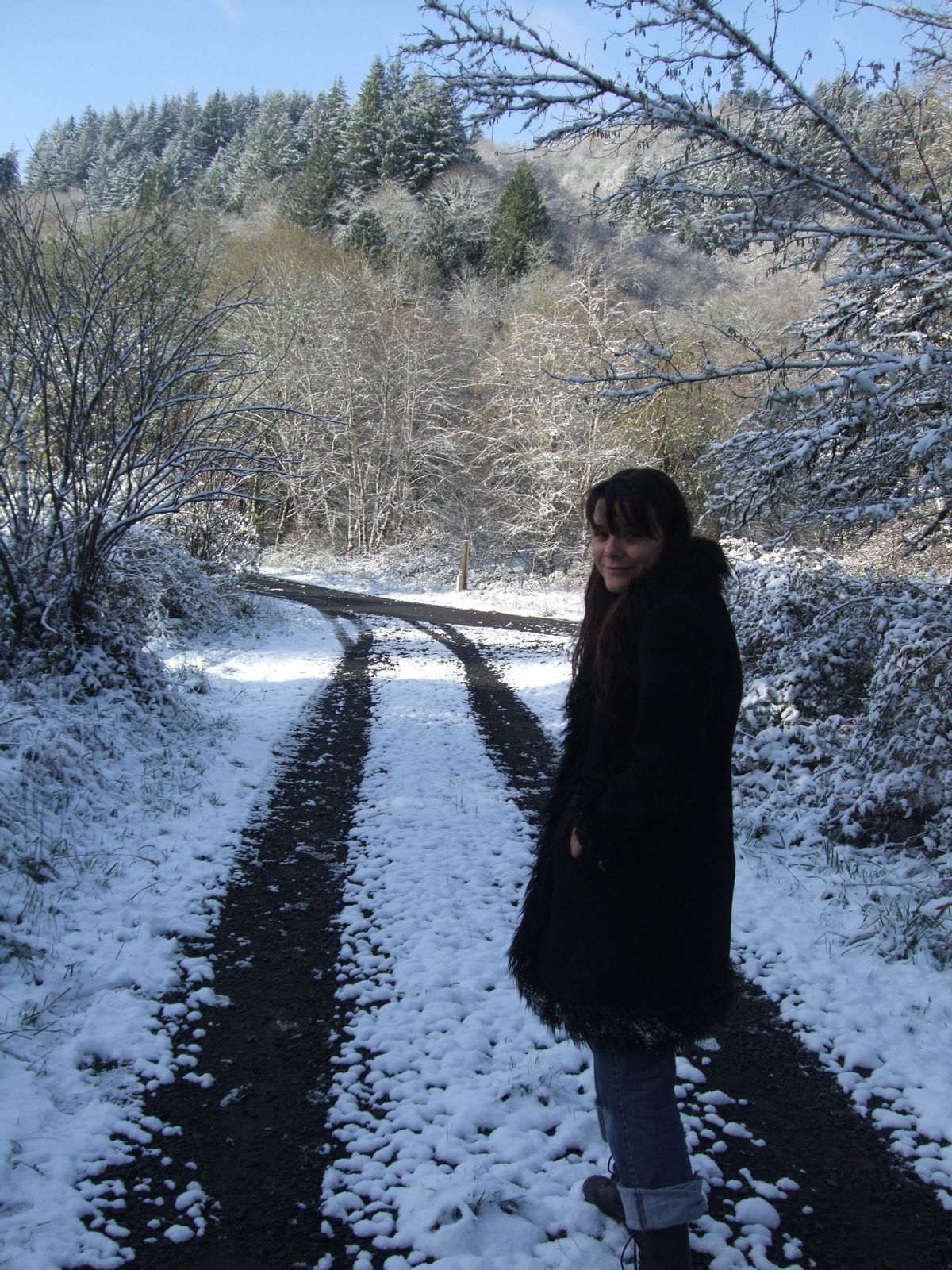 The author outside her home in Oregon.
--

The Great Depression has been invoked time and time again since the market crashes of 2008. Not everyone's life has done a back flip to 1932, but sometimes I think mine has. The other day my husband, Rich, stomped up the front stairs in his muddy work boots, dripping with rain, and said, "That sourdough starter exploded all over the seat of the truck."

"Uh, huh," I said, distracted. I'd been crouching in front of our woodstove for 45 minutes trying to coax the smoldering pile of kindling to flames. The wood was wet and unseasoned, and the mausoleum damp of our house wasn't helping. I could hear water plinking through the tin roof into the bucket behind the stove, where the worst of the leaks fall. When Rich's statement sank in, I was amused at the perfect anachronism: my mustachioed husband in a flannel shirt complaining about sourdough starter. But then I realized I fit the picture, too. I wore rubber ankle boots, a skirt, a long canvas jacket smeared with mud, a wool hat and an apron. My plans for later that day: gather dandelion greens for dinner, heat water for my bath, scrub the wooden floor with a vinegar solution, and sweep out the outhouse. Yes, outhouse.

There was a time, I thought vaguely as I blew at the pathetic smattering of coals, a time when my plans for Saturday would have been different. Back then, my plans might have involved red high heels, or a few $7 St. Germain and champagne cocktails at the bar or, on a slow week, shopping for dinner at the market, where I might have bought Perrier and lox and a $5 loaf of artisan bread. It's not that our life in Seattle was opulent -- we weren't rich. We probably weren't even middle class by most people's standards. But, like most Americans, we had learned to live beyond our means.

Two years after the outset of the recession, I can no longer pretend to afford the luxury items that once seemed the normal trappings of urban existence. For the past six months, we've been downsizing every aspect of our lives. By moving from the city to the country, we cut our expenses by 75 percent. It's not enough. Every day, I try to think of new ways to save money while still maintaining a decent quality of life. This means rethinking the way I buy food. It also demands a more inventive and time-consuming approach to just about everything.

If I wanted to buy any old loaf of bread, I could probably find one for 99 cents. But I can make a much better loaf of bread for about $1.50. So I do. I make Cuban bread, and Rich makes a classic loaf he learned from his Wisconsin grandmother. When we run out, I whip up a batch of biscuits. We keep saying we're going to figure out how to make tortillas, but that would probably be more of an entertaining project than an actual money saver.

I've always believed that fat makes everything taste better, and bacon drippings and homemade chicken stock were staples of my kitchen even in wealthier times. These days, I make the thrifty version of stock. It's a time-honored approach: Instead of buying backs and necks for stock, I buy a whole bird. I plan ahead and start saving vegetable scraps a few days before I roast the chicken: I keep a container in the fridge where I stow carrot ends, onion skins, and celery leaves. On the night I roast the chicken, I cut the meat from the bone for dinner, then dump the carcass in my stockpot with the vegetable scraps. When I skim the fat from the stock, I save that too, and use it later in gravy or black bean soup.

I've been experimenting with saving broth left over from cooking vegetables and legumes. Garbanzo broth makes a decent stand-in for chicken stock and can be used to add liquid and flavor to spaghetti sauce or soup. Water left over from blanching nettles is a curious jewel-tone purple; you can tell it's nutritionally rich just by tasting it. What with all the glass jars full of dodgy-looking liquids, my refrigerator is starting to resemble an apothecary.

It's good to feel like I'm not being wasteful, sure. But this variety of thrift also leads to better tasting food. If you have only a can of tomatoes and half an onion, your sauce is going to taste more interesting if you can dress it up with homemade stock or bacon grease, and it's not going to cost you a cent more. Bacon drippings + dried black beans+ a few cloves of garlic = a pretty damn good soup. Eat that with a slice of homemade bread, and life doesn't feel too shabby.

My new life is not all raindrops on roses. Some days I feel like Ma Kettle. Other days I feel like an insufferable hippie. I worry that I'm turning into one of those people I used to detest: some wholesome, sanctimonious extremist who gets her kicks from making her own granola. What exactly happened to my rock 'n' roll lifestyle? Didn't I used to smoke Camels in dark bars while trash-talking domesticity?

On better days, I have fun with it. After all, now that I live in the middle of bloody nowhere, I have to entertain myself somehow. The other night I made a dinner that utilized four common garden weeds: nettles and dandelion greens sautéed in bacon grease (an idea gleaned from a reader), a sorrel and miner's lettuce salad, and, the pièce de résistance, risotto made with nettle broth instead of stock (an idea I stole from my neighbors and friends, GH and Kamari).

I chose a risotto recipe from an old family favorite, "The Best of James Beard." Beard's take on risotto looked decently easy and it had another point in its favor: It was the only risotto recipe I'd came across that didn't call for white wine. Unfortunately, cooking wine didn't make the final cut on my last trip to the grocery store: I had to snatch a few things off the belt when I realized I was over budget. R.I.P cooking wine, soy sauce and Ninkasi IPA. Whatever. At least I can afford butter, undoubtedly an impossible luxury to many people who survived the actual Great Depression.

The recipe proved as easy at it looked, and my adaptations (nettle broth for bouillon, for example) didn't ruin the finished result. The rice was neither crunchy nor mushy, and the flavor had dimension beyond Parmesan and butter. I elected not to add actual nettles to the risotto because I wanted to see if I could taste the difference afforded by the nettle broth, and I could; the risotto had a vital, lively flavor. The one thing I missed: the white wine. If you try this risotto recipe, I recommend swapping out a few tablespoons of broth for dry white wine. But all in all, the meal was good. The tart sorrel of the salad contrasted sharply with the rich risotto, and the teaspoon of bacon grease transformed the nettle and dandelion greens in the way that only bacon grease can. The cost per serving of risotto was 50 cents, the salad about 40 cents a serving. The greens were entirely free. So for $1.80 total, Rich and I enjoyed a good meal. Rich even called it satisfying, a word he usually reserves for large hunks of meat.

It's better than waiting in the bread line, and I have a feeling that our great recession is inspiring me to develop skills and habits that will stick with me till the end of my days. In the meantime, I'm trying to walk the line between the girl I was then and the girl necessity has spawned: That'll be me in the kitchen, with the stock pot and the nettles, listening to Black Sabbath.

Note: I added a teaspoon of chicken fat (skimmed from chicken broth) to the nettle water, but without that relatively unnecessary addition, this would be a great vegetarian option.