Late night comedy: still laughing at, not with, gay culture 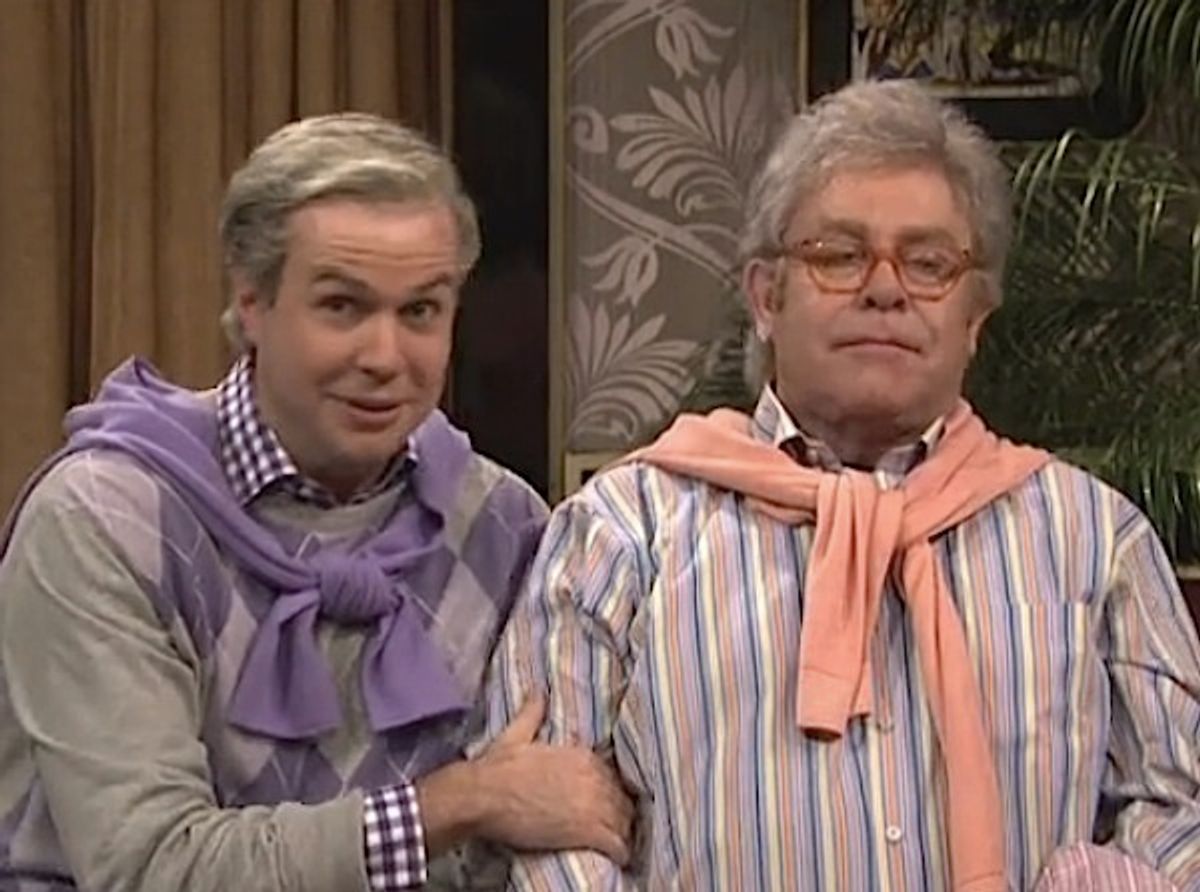 There was something strange about this weekend's "Saturday Night Live." No, it wasn't the fact that, despite the guest host ostensibly being Elton John, half the episode actually starred Tom Hanks and a brief cameo by Jake Gyllenhaal. (I just assumed that this was the deal Tom and Jake cut in order to get good seats for Elton's next concert.) And it wasn't that most of the sketches revolved around Elton John playing himself, because hey, the guy isn't an actor, and he's still twice as funny as any sports star the show has courted.

No, what was so noticeable about this week's "Saturday Night Live" was that every sketch Elton was in –from cold open to finish – revolved around the singer's homosexuality. (The one exception might have been the "Knights of the Realm," which was more about making fun of British people than the gays.) Take the Lawrence Welk opening number, for example:

And then there was this sketch "The Silver Screen," the premise of which, as far as I could tell, is that it's funny when old queens give each other pet names. Every time Taran Killam and Elton kissed, the audience hooted.

This was not to say "The Silver Screen" wasn't funny. It was very funny. And there is definitely room for gay humor on TV. But not if it's being used as the only thing making a sketch funny: the concept for "Silver Screens" couldn't have been more than "Two gay men spend more time making googly eyes at each other while dressed like Christopher Guest from 'Waiting for Guffman' than paying attention to Vanessa Hudgens." (To be fair, a lot of things are better than paying attention to Vanessa Hudgens.)

The most egregious of these pieces was the "Old West" sketch, which Hulu describes as "A cowboy from the future finds himself very out of place in an old west saloon," but would be more aptly characterized as "Elton John as a gay cowboy on a unicorn."

None of this should be surprising, although it is disappointing. "Saturday Night Live" has a history of making gay jokes that focus on the humor of overtly masculine guys being gay. ("Shmitt's Gay Beer" is probably the most famous example, where Adam Sandler and Chris Farley are two 90s bros who crack open their brewskis  to find a pool full of hunky beefcakes rather than bikini-clad girls. They are delighted and high-five.) Now, the updated "SNL" jokes are more subtle: commercials for estrogen supplements marketed to pre-op transsexuals and characters like Stefon, a tweeked-out gay club promoter who describes "hot" new venues that sound like something out of Clive Barker's nightmares:

But there is a difference between the character of Stefon and the Estro-Maxx commercial/Elton John episode, in that the former only uses a character's sexuality as an aspect of his persona, while the other two use it as a punch line.

But wouldn't keeping homosexual humor entirely out of shows like "Saturday Night Live" just be a way of pretending that the culture doesn't exist? Thomas Rogers posited in his piece two years ago, "Late night's new gay obsession: Is it funny?" was that this type of gay humor might actually be a subversively positive side effect of the mainstreaming of the culture.

"But it’s also possible that comedians like Kimmel and Samberg think they’re able to get away with more un-PC humor now that gay visibility has made some progress – and that its culture has become more mainstream. One of the hallmarks of a movement’s success, after all, is its ability to have a sense of humor about itself.

One of the hallmarks of a movement’s success, after all, is its ability to have a sense of humor about itself."

Elton John would seem to fit into this category: after all, he is a gay man making fun of his well-known gayness. But by having the show focus on that one joke and never move beyond it, SNL isn't making a statement about homosexuality being normal. It's saying that if you are a gay celebrity, your sexuality is the only part of you worth noting.