The most uncounted cost of Endless War 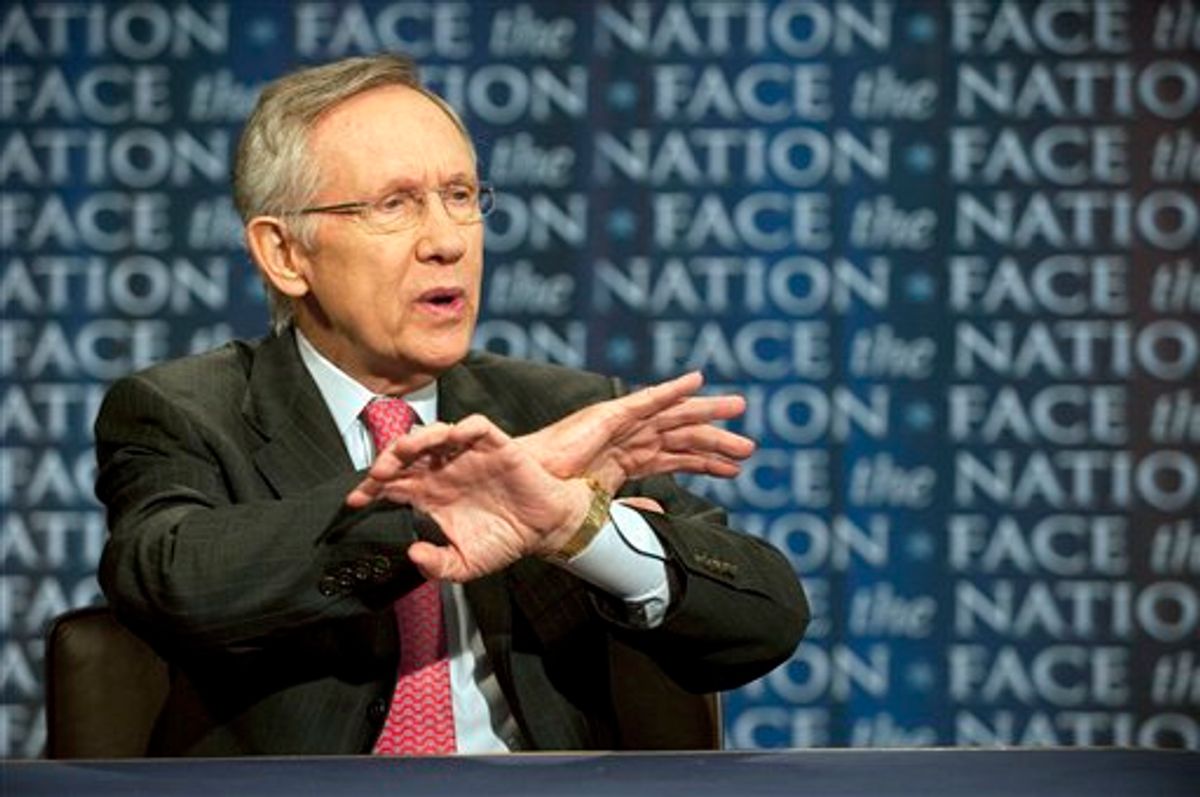 In this photo released by CBS, Sen. Harry Reid, D-Nev., talks about the possibility of a government shutdown over a budget impasse and U.S. military action in Libya on CBS's "Face the Nation" in Washington Sunday, April 3, 2011. (AP Photo/CBS, Chris Usher) NO ARCHIVES. NO SALES. (AP)
--

Harry Reid and Lindsey Graham yesterday both suggested that Congress take unspecified though formal action against the Koran-burning by Florida preacher Terry Jones, which triggered days of violence this week by angry Muslims in Afghanistan. Graham in particular -- using the "but" that is the hallmark of all enemies of the First Amendment -- said: "Free speech is a great idea, but we’re in a war." He claimed that "during World War II, we had limits on what you could say if it would inspire the enemy" (I think he was thinking of World War I, when Woodrow Wilson succeeded in all but criminalizing war opposition, including passage of the dangerously broad Espionage Act: the statute Dianne Feinstein and others now want to exploit to prosecute WikiLeaks).

There are several points worth highlighting about all of this. First, it demonstrates how many people purport to believe in free speech but don't. The whole point of the First Amendment is that one is free to express the most marginalized, repellent, provocative and offensive ideas. Those are the views that are always targeted for suppression. Mainstream orthodoxies, harmless ideas, and inoffensive platitudes require no protection as they are not, by definition, vulnerable to censorship. But as has been repeatedly seen in history, ideas that are despised and marginalized are often proven right, while ideas that enjoy the status of orthodoxy prove to be deeply erroneous or even evil. That's why no rational person trusts the state -- or even themselves -- to create lists of Prohibited Ideas. And those who endorse the notion that ideas they hate should be forcibly suppressed inevitably -- and deservedly -- will have their own ideas eventually targeted by the same repressive instruments.

If you're someone who wants to vest the state with the power to punish the expression of certain views on the grounds that the view is so wrong and/or hurtful that its expression should not be permitted -- as European countries and Canada routinely do -- then you're someone who does not believe in free speech, by definition; what you believe is that one is free to express only those viewpoints which the majority of citizens (and the State) allow to be expressed. Many of the most important views throughout history have been, at some point, hurtful, dangerous and even violence-engendering. The whole reason for free speech protections is to safeguard such ideas -- despised by the majority -- from suppression. Burning the Koran is despicable, but it's every bit as much core political speech as burning the American flag or an effigy of a hated political leader, or tearing up a picture of -- or publishing cartoons unfavorably depicting -- a religious leader.

Second, this event demonstrates one of the most uncounted (though one of the most intended) costs of our posture of Endless War: the way it is exploited to endlessly erode core liberties. The last decade's unrelenting (and still escalating) War on Terror -- i.e., war in multiple countries in the Muslim world -- has led to an erosion of virtually every basic civil liberty, including due process, Fourth Amendment protections, and habeas corpus. All wars have the same effect, as many of the most abusive assaults on core civil liberties in American history have been justified by appeal to war.

As Andrew Sullivan said of this episode: it's "a classic example of how warfare abroad can curtail liberties at home . . . we should also remember that this war has no end, and that therefore the liberties taken away by wartime are permanently taken away." In addition to the body count and the vast sums of money, this inevitable erosion of liberty from our continuous wars -- and the always escalating wall of secrecy that enables it -- must be counted when deciding whether to support them. Wars degrade a nation's character and the fabric of its political culture; Endless War has that effect exponentially.

Third, there is an extreme irony in Harry Reid and Lindsey Graham, of all people, suddenly worrying about actions that trigger anger and violence in the Muslim world. These two Senators, after all, have supported virtually every one of America's actions which have triggered vastly more anti-American anger, vengeance and violence in the Muslim world than anything Pastor Jones could dream of spawning -- from the attack on Iraq to the decade-long occupation of Afghanistan to blind support for Israel to the ongoing camp at Guantanamo. To support his demand for Congressional action against Pastor Jones, Graham has the audacity to cite Gen. Petraeus, who condemned the Koran burning on the ground that it would endanger American troops: "General Petreaus understand better than anybody else in America what happens when something like this is done in our country and he was right to condemn it."

But here's something else Gen. Petraeus said about what triggers violence against Americans and helps the Enemy:

Closing the military prison at Guantanamo Bay would purge the U.S. of a symbol used by enemies to divide the nation, the head of the U.S. Central Command said Friday. Army Gen. David Petraeus said the U.S. military is "beat around the head and shoulders" with images of detainees held in Guantanamo.

On a previous occasion, Gen. Petraeus said: "Gitmo has caused us problems, there's no question about it. I oversee a region in which the existence of Gitmo has indeed been used by the enemy against us."

By publicly demanding that Guantanamo detainees not be tried in the U.S., Reid played a major role in preventing closure of that camp, while Graham has been a leading advocate of the indefenite detention regime that made the camp so controversial and which itself spawns substantial anti-American violence in Afghanistan. Reid and Graham both voted for the attack on Iraq. Reid and Graham continue to be outspoken supporters of the war in Afghanistan. Both Senators are blind supporters of Israel, including its most heinous acts. If they're looking for targets to punish whose ideas have triggered violence and anti-American rage in the Muslim world, they should look in the mirror.