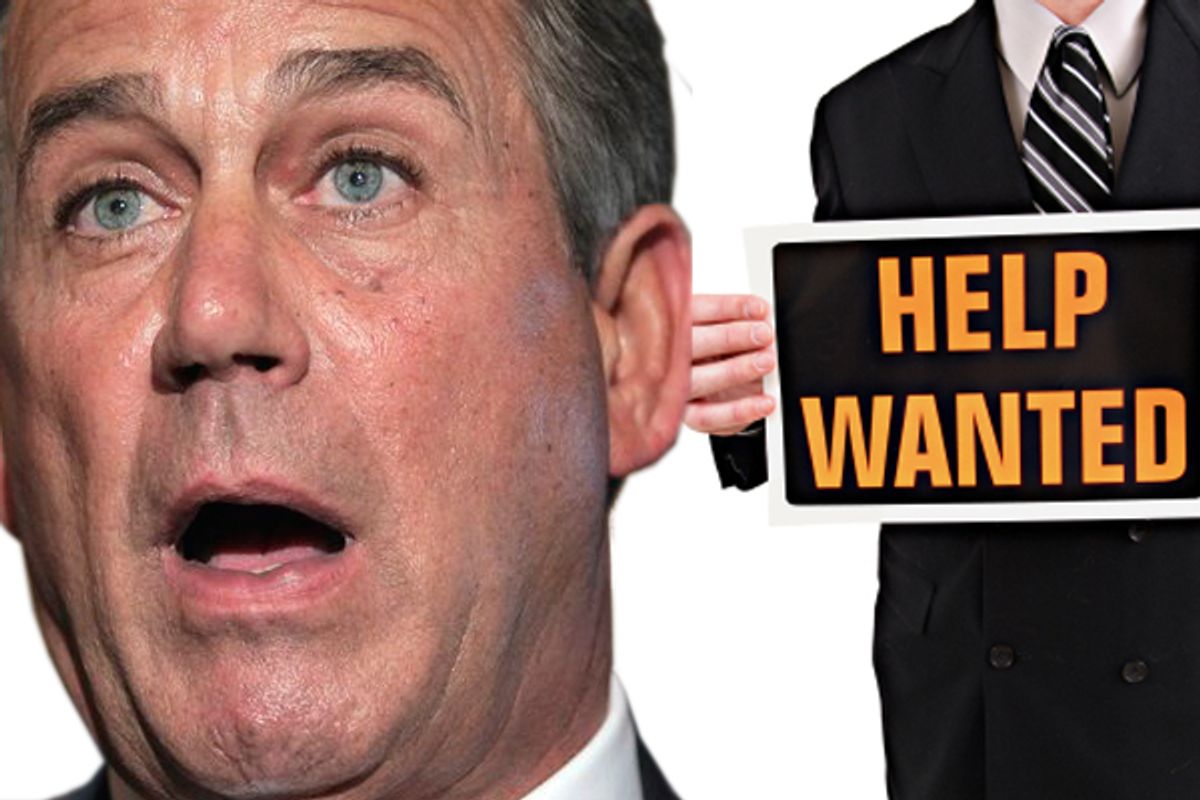 When Beck's show made its debut on Fox News Channel in January 2009, the nation was in the throes of an economic collapse the likes of which had not been seen since the 1930s. Beck's angry broadcasts about the nation's imminent doom perfectly rode the wave of fear that had washed across the nation, and the relatively unknown entertainer suddenly had 3 million viewers a night...

But as the recession began to ease, Beck's apocalyptic forecasts and ominous conspiracies became less persuasive, and his audience began to drift away. Beck responded with a doubling-down that ultimately brought about his demise on Fox.

It might be instructive to apply this theory to the political calculus around the government shutdown brinksmanship currently obsessing Washington. As my colleage Steve Kornacki explained earlier today, Speaker of the House John Boehner's unwillingness to compromise with Democrats is rooted in the Tea Party's current massive influence over the House GOP. Tea Party fever helped Republicans win a big victory last fall and Tea Party Republicans are itching for a shutdown. Therefore, Boehner has no choice but to be inflexible, unless he wants to face a challenge to his own leadership.

But if the Republican victory last November can be attributed, at least in part, to the same factors that initially fed Glenn Beck's popularity, that is, deep-seated fears about the economy, then it is well worth wondering whether the current Republican stance is based on a national mindset that is rapidly becoming archaic. The U.S. is in a different place now than it was last November. On Election Day, the unemployment rate was 9.8 percent, and, after encouraging economic growth in the spring, the prospect of a double dip recession was appearing more and more likely. But the double-dip did not materialize. Today's unemployment rate is 8.8 percent; the U.S. economy added 863,000 jobs over the last six months. That's nowhere near enough to dig us all the way out of the hole created by the financial crisis, but the trend line has clearly changed for the better. There's less panic in the air, and more hope.

And yet, House Republicans are acting like it is still last November. And remember, this is just the first skirmish in a longer war; by all accounts, the GOP leadership is planning to play a similar game of hardball over raising the debt ceiling, and the wrestling over the contents of next year's budget, which began this week with the release of Paul Ryan's "Path to Prosperity," has only just begun.

But does an electorate that may finally be breathing a sigh of relief want to see unending budget gridlock? The GOP is playing a risky game. Outside of the Republican base, the general public doesn't want a shutdown, especially if the disruption poses a threat to the larger economic landscape -- which a failure to raise the debt ceiling almost certainly would. The state Supreme Court election in Wisconsin this week sent a clear message that Tea Party momentum has slowed. If the economy continues to recover, a Republican party stuck in the malaise of last November may find it is out of step with voters in 2012, just as Glenn Beck has found himself out-of-step with Fox News viewers today.

Imagine what might happen, for example, if voters see more stories about job growth like the one reported by Reuters on Wednesday, "Job Boom in Michigan, as Clean Energy Manufacturing Drives Economic Recovery."

Michigan's "green" economy is growing fast, data shows, with thousands of clean energy jobs on the horizon as a new manufacturing base is being built on the expertise of its battered auto industry....

Former Gov. Jennifer M. Granholm, whose second term ended in January, said in an interview that Michigan businesses are expected to create more than 150,000 clean energy jobs in the next decade from $14 billion of projects in the pipeline.

The jobs will stem from 17 advanced battery companies and nearly 50 solar, wind and biofuels companies that came to Michigan from August 2009 to December 2010, lured by state tax credits and federal stimulus grants, Granholm told SolveClimate News....

For the first time in a decade, Michigan is projected to gain jobs and break its unprecedented string of rising unemployment, according to April 4 figures from the University of Michigan's economics department.

This week, the department updated its earlier projections of 20,000 new positions for 2011. Economists now anticipate Michigan will add 64,600 jobs in 2011 and 61,500 more in 2012. The increase reflects "in part a bounce in manufacturing following the traumatic situation of the recent past," they wrote.

After keeping GM and Chrysler alive and steering so much clean energy business to Michigan, the Obama administration can easily make the case that it deserves some credit for that state's job turnaround. And if the national picture continues to improve telling a positive story about the Obama administration will get easier and easier. But if House conservatives keep disrupting the narrative by threatening to shut down the government, what story will they have for voters in 2012?