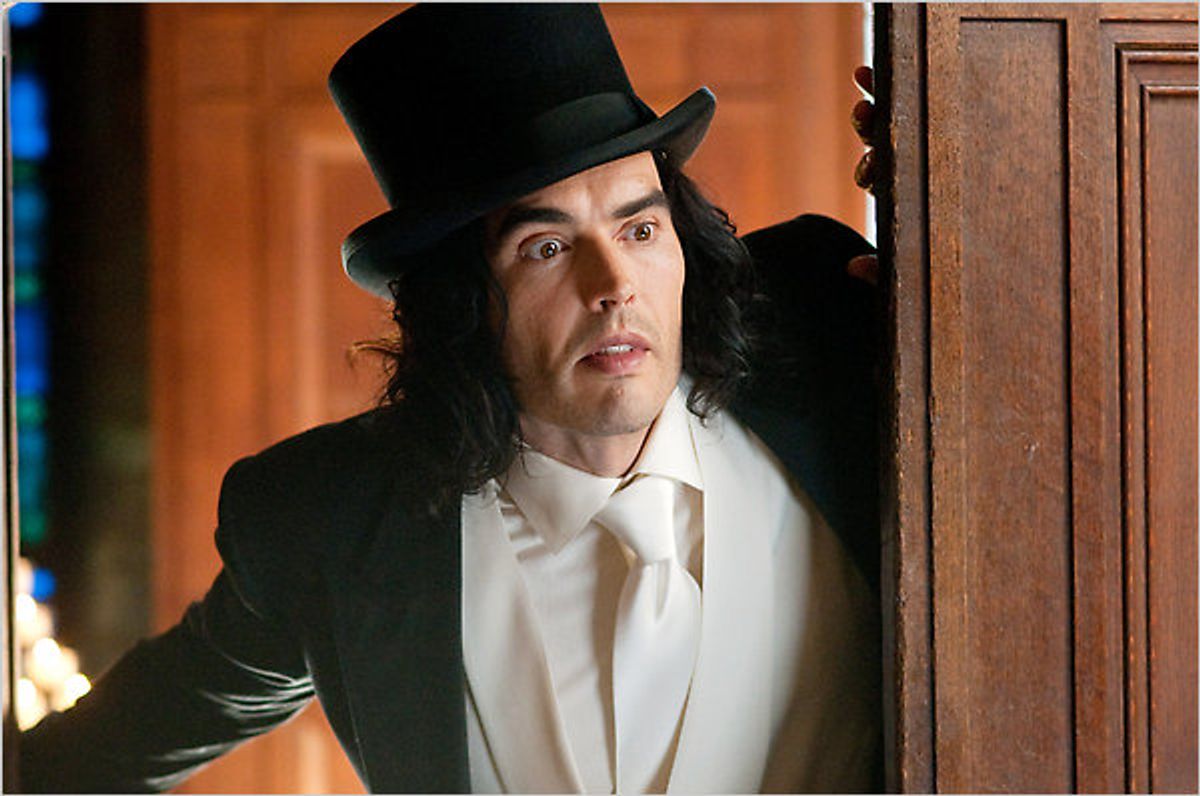 You pretty much know what you're getting with "Arthur," a remake of an early-'80s comedy hit that misfires on multiple levels but isn't all that terrible. (Put that on your poster, Warner Bros.!) This fable of a feckless, alcoholic zillionaire who finds true love has been tastefully updated for contemporary sensibilities by director Jason Winer and writer Peter Baynham. (So: No more drinking and driving!) It never departs from its zany-heartwarming rom-com recipe and it bears absolutely no relationship to real life. I know it's only April, but "Arthur" might be the year's first summer movie, in the sense that if you're stuck in the house on a rainy day with a large group that extends from tweens to grandparents, you could definitely do worse. (The film's humor is a teensy bit risqué, not to mention bewildering, for smaller children.)

But with Russell Brand, the peculiar English comic who plays Arthur with an ultra-twee, almost girlish accent that seems like a Martian imitation of Dudley Moore's original, you really don't know what you're getting at all. Very late in the film, after Arthur has gotten sober and manned up to life and so on, he invades the children's room of a public library to win back his lost lady love, Naomi (Greta Gerwig). While he's pitching woo, a kid interrupts him to ask, "Are you a boy or a girl?" This does not deter Arthur, who barks, "Doesn't matter," but the question reverberates a whole lot more than it ought to, maybe. With his enormous head, enormous feet and cascade of black ringlets, his impressive but strangely proportioned physique and his ability to look beautiful and ugly at the same moment, Brand does not quite appear male or female or even exactly human. He looks like a member of a related species from elsewhere in the galaxy, or perhaps an Afghan hound who's been changed into a person by a wicked sorcerer.

I suppose "Arthur" represents Brand's biggest attempt to become an American movie star, but he's once again playing a fish-out-of-water alien, different in flavor but not in kind from Aldous Snow, the over-the-hill Anglo rock god he portrayed in "Forgetting Sarah Marshall" and "Get Him to the Greek." And while Brand is undeniably an intelligent, charismatic and physically pliable screen presence, something like the unholy love child of Charlie Chaplin and David Bowie, he doesn't exactly ooze big-screen testosterone. (Yes, I know: He was No. 1 on Salon's Men on Top list this year, and let's just say that remains a topic of internal debate.)

Brand's coupling here with Gerwig, the one-time indie heroine who appeared in Noah Baumbach's "Greenberg" and several Joe Swanberg films, is supremely awkward and nearly devoid of sexual chemistry. Gerwig is poorly served by this underwritten ultra-pixie role (those outfits! My eyes!), and Brand needs to butt against someone with harder, weirder edges. He's much funnier in his scenes with Jennifer Garner, who plays the conniving power-bitch who conspires with Arthur's mother (Geraldine James) to coerce him into an unwanted marriage.

One could write a dissertation -- indeed, I bet somebody has -- about why the sardonic, satirical mode of British comedy often translates so poorly into the Amurkin idiom. It's not that we unwashed colonials can't tolerate a joke at our own expense and fail to grasp irony, or that British audiences are a bit better educated, more cosmopolitan and more aware of the absurdity of history. Well, OK, it is those things, a bit. But it also has to do with scale and sheer bigness. To succeed in American pop culture you have to broadcast a clear, strong and dominant signal, and comedians like Brand or Steve Coogan or Ricky Gervais or (insert your favorite Brit performer here) have prospered at home by delivering deliciously contradictory simultaneous signals.

To find a contrary example, you might have to go back to -- well, to Dudley Moore, who was once part of a legendarily profane and drunken comedy duo in 1960s London (with Peter Cook) before becoming the star of insipid Hollywood comedies like "Arthur." I strongly encourage Russell Brand not to push the analogy any further and get himself cast in a remake of "10." (Still, I can't help myself: Nominations for his co-star, please?) I'm not sure he should try to be a leading man at all, except in A) remakes of "The Man Who Fell to Earth," "Brother From Another Planet" and "Stranger in a Strange Land," B) Tarzan movies or C) Anne Rice rip-offs featuring queeny vampire lords.

Oh, yeah. The movie: Do you really care? Helen Mirren is pretty funny in the John Gielgud role (transposed from butler to nanny), although it's depressing to see her play characters who are actually old. Jennifer Garner is enjoyably mean, which complicates things, because I wanted Arthur to spend more time with her instead of with milquetoasty Naomi. Nick Nolte has finally completed his transformation into a bear.