A 5,000-year-old man sets off sensational coverage -- and shows how far we haven't come in gender awareness 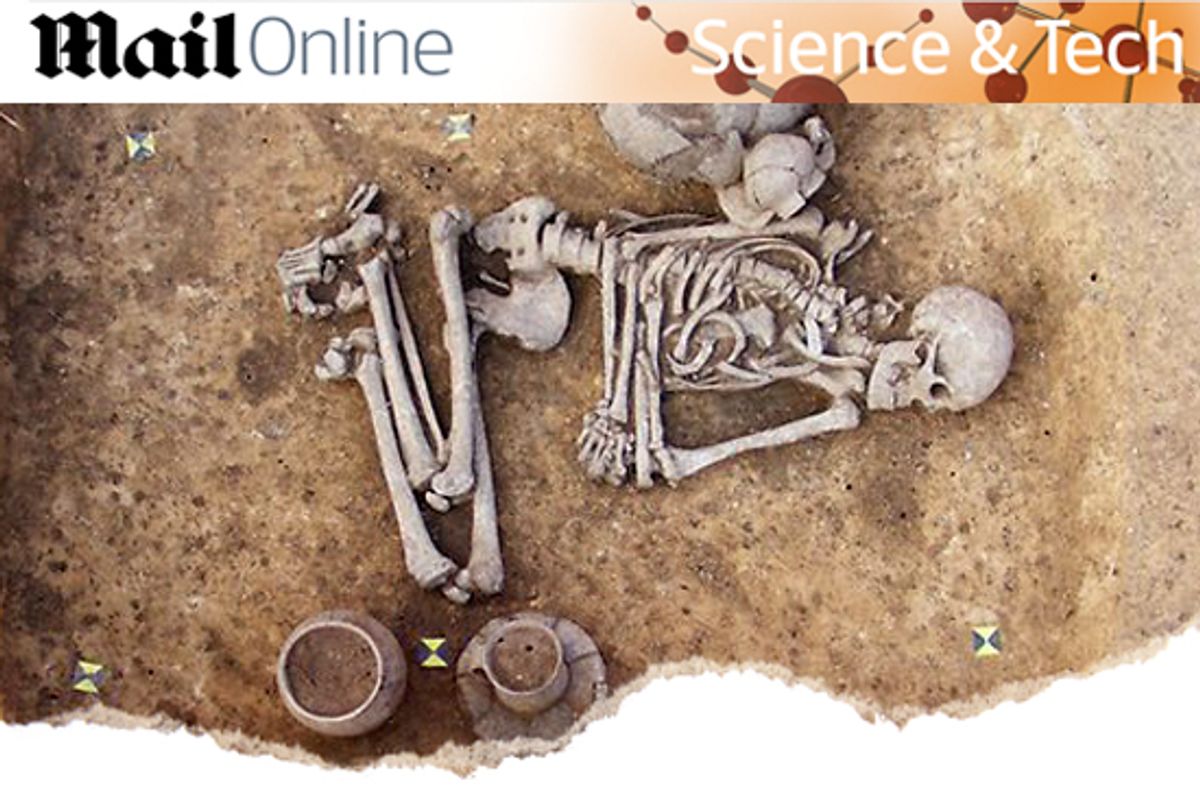 When news broke yesterday that archaeologists had uncovered the remains of a 5,000-year-old man in the suburbs outside of Prague, the big surprise, proclaimed in headlines around the world, was that the body was that of a "gay caveman." (The Daily News, as if referring to a caveman senator caught on the down low, described him reservedly as just a "suspected gay caveman.")

What, you ask, led to such an intimate conclusion about a 5,000-year-old who was "outed by the way he was buried"? Did he have an especially neat cave? Was he laid to rest with a rainbow flag and some military discharge papers? Did the markings on his grave look like they were done by Tom of Finland? No, it was because he "was buried in a manner "normally reserved only for women." Buried like a woman. That's so gay!

Back in the day 2,900 to 2,500 years ago, when the man Fox News called a "stone age gender bender" shuffled off the mortal coil, the ladyfolk were laid to rest facing east, accompanied by such domestic knickknacks as jewelry and pottery. Dudes, on the other hand, met their maker facing west, accompanied by manly gear like weapons, tools, a copy of Maxim and a can of Axe body spray. And as the Telegraph  explained in its report on the "first homosexual caveman," this guy was pushing daisies facing east, with a couple of jugs for company on the journey to the afterlife. Lead archaeologist Kamila Remisova Vesinova told the paper, "From history and ethnology, we know that people from this period took funeral rites very seriously so it is highly unlikely that this positioning was a mistake. Far more likely is that he was a man with a different sexual orientation, homosexual or transsexual.... We believe this is one of the earliest cases of what could be described as a 'transsexual' or 'third gender grave' in the Czech Republic."

I'm no archaeologist, but there's a lot to be skeptical about any person who studies human culture for a living -- and any newspaper that writes on it -- who can't differentiate between being gay, transgendered, intersexed or "third gendered." So let me help out here: They're not the same things. They don't all ride the same float at Pride. Being transgendered is not interchangeable with being gay. Not every gay man is feminine. And not every feminine man is gayer than a "Glee" marathon. Seriously, they're called metrosexuals; where have you been for the past decade, USA Today? Jeez, a guy makes one comment about the wild boar being a little overdone and he's labeled for eternity.

While little is still known about Mr. Caveman's daily life -- we'd really need to see his OKCupid profile to make the call -- the fact that he was buried in an atypical way is a potentially exciting discovery. It could ultimately prove a reminder of the innate fluidity of gender, and the way that spectrum of possibility has always been present within our humanity. But in her smart and sassy takedown of the media storm, archaeologist, bioanthropologist and classicist Kristina Killgrove points out that "Just because all the burials you've found to date are coded male and female based on grave goods doesn't mean there aren't alternate forms you haven't found and doesn't mean that the alternate form you have found has a lot of significance." More meaningfully, she observes that the remains date only back to the Copper Age, which makes them miss the Neanderthal and Cro-Magnon era by about 30,000 years, or roughly half the time of a Beltway stalemate. The gay caveman may or not have been gay, but he definitely wasn't a caveman.

Orientation is as old as the human race itself. But taking the wild leap that being buried with a pot is indicative of homosexuality is as simplistic, shallow and frankly insulting to women and men as the "not that there's anything wrong with that" line.  Human nature is a little more complicated than that. And you'd think by now we'd be evolved enough to know.