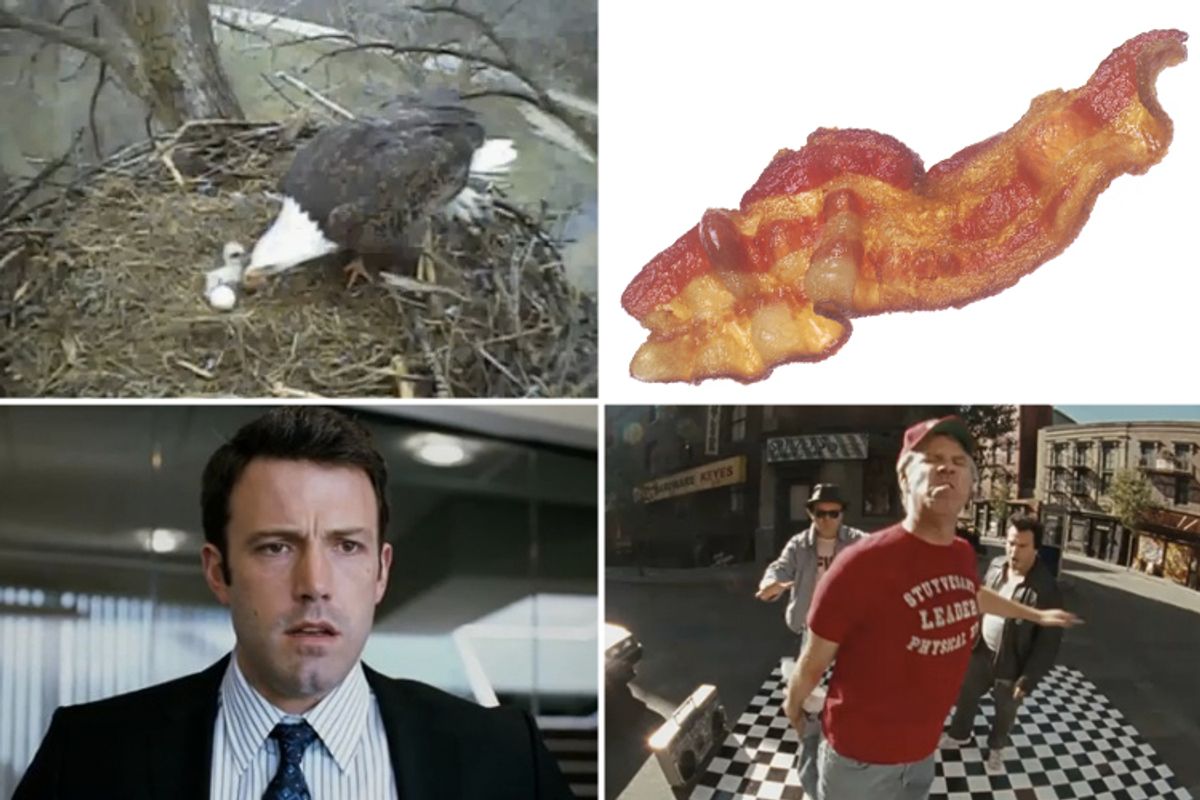 With all the problems in the government this week -- from the possible shutdown to the tea partiers to Donald Trump -- isn't it time you stopped and focused on what was really important? Like all that entertainment news you've let slip through your brain while you were contemplating what would happen if the federal government stopped working? Well now it's time to take a deep breath, relax and check out some of the weirder stuff you may have missed this week.

1.) Bacon cologne and perfume: Hey, that's a thing now! Really great to use if you like being chased down the street by dogs.

2.) Ben Affleck may be playing the brutish Tom Buchanan in Baz Luhrmann's "The Great Gatsby" remake: Fine. He might actually rock that. But does it still have to be in 3D?

Usually we'd think it's silly for an album to get a trailer (We're getting a little trailer-heavy: Why do books need trailers? Only movies need trailers!), but "Fight For Your Right - Revisited" has Susan Sarandon, Will Ferrell, Jack Black, Stanley Tucci, Danny McBride, Seth Rogen and John C. Reilly. So it's basically the best.

4.) Pia Toscano eliminated from "American Idol": We know, crowd favorite. But you guys are the ones who voted her off! Also, now Casey Abrams can go on to Viking glory.

5.) Kirstie Alley fell down on "Dancing with the Stars": And somehow you managed not to talk about it all week! Good for you!

6.) Jay-Z starts lifestyle newsletter: I was just wondering how Jigga could be more like Gwyneth Paltrow.

7.) Tina Fey leaving "30 Rock" to have a baby: OK, it sucks, and we know that. But you know what? If this is what an empowered, feminist comedy icon wants to do with her life, who are we to be like "Nooo you can't have another baby, we want more funny stuff!" Grow up, us.

8.) Miley Cyrus sex doll sells out in 48 hours: Which is twice as long as it took regular Miley Cyrus.

9.) Charlie Sheen courts Mila Kunis: Oh, this should be good. We mean, obviously not for Mila, who is horrified. But for the rest of us watching at home: good times.

10.) Baby bald eagle cam!!: Three babies hatched recently, letting us all into the guilty pleasure of feeling a vague sense of voyeurism towards our national mascot. But still, awwww!