My father, the king of thrift

Whenever I find myself bargain shopping (which is often), I'm reminded of all I learned from the master 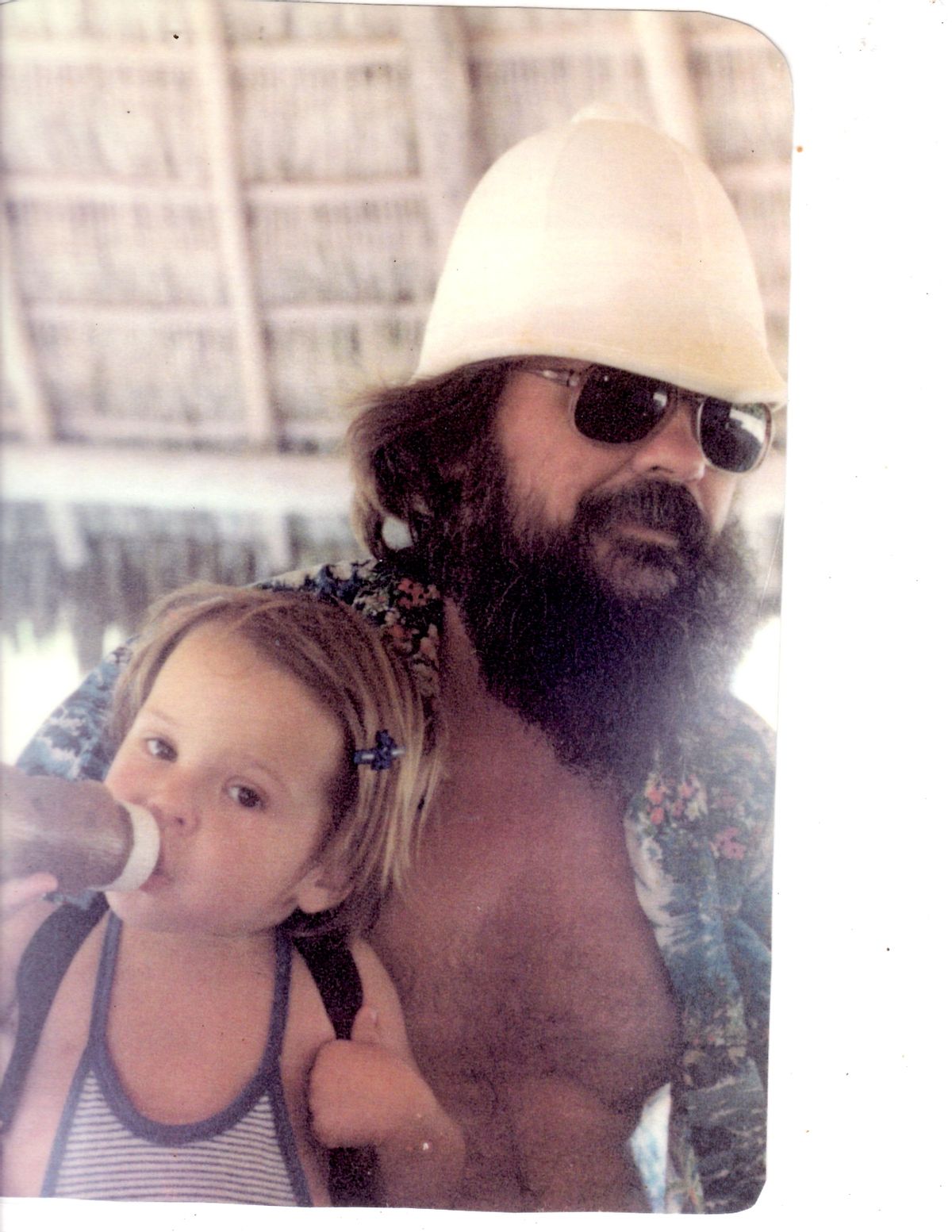 The author as a child with her father
--

My dad, Steve Rogers, was the king of scavengers. He was known to scavenge Mexican dumps, and, due to his keen eye for free piles, he and my mother built our three-bedroom house for a total cost of $6,000. When he couldn't get something for free, he delighted in finding deals. My parents made a life of this, actually. Their business was importing folk art from Mexico and Guatemala; their specialty was tracking each item to its maker in order to avoid paying middlemen.

If you really wanted to see Steve in a good mood, your best bet was to follow him to a cheap food source. He'd spend hours in the cavernous markets of Oaxaca and San Miguel, where he'd buy the best, cheapest serrano chiles from one old lady and then move on to buy the best, cheapest cilantro from her neighbor. He knew these places like the back of his hand, and he adored the funkiness: the smell of gutter, the pig's head hanging from a hook, the stall in the back that sold witchcraft supplies.

Returning to our expensive and hygienic home country was always a sorrowful experience for my parents, but Steve maintained his sanity by ferreting out establishments that had at least a faint, comforting patina of third-world charm. He lived for trips up to Seattle, where he could scour the Chinese and Vietnamese markets of the International District for deals. He'd buy anything that was cheap and looked interesting: In the early '80s, long before calamari was a common menu item, we ate fried squid, dried squid and every bizarre pickled vegetable my dad got in his clutches. He kept a jar of kimchi on the dashboard of our van, and he'd take a big forkful every now and then as he drove. "I could live off this stuff," he'd say, his silver beard pungent with fermented cabbage.

His favorite place close to home was Grocery Outlet. My dad called it the Dented Can Warehouse, and eventually just the Dented Can. For those of you not familiar with this chain of discount supermarkets, Grocery Outlet, which has been around since 1946, is like Trader Joe's for poor people. Instead of featuring a house line, it off-loads discontinued products, quick sale items and overstock. You can find everything and anything there: from 10 packs of flyswatters to magnums of bubble gum-flavored champagne, all for ridiculously low prices. The stores are independently operated franchises, and each one is a little different. Naturally, my dad was in heaven: weird and cheap, his two beacons of guiding light.

I liked our trips to the Grocery Outlet in Springfield because my dad couldn't resist the great deals on prepackaged snack foods, items my parents normally eschewed. I also liked these expeditions because the deals at the Grocery Outlet made him so happy. "Check it out! 64 ounces of anchovies for only 1.99!" he'd say, grinning, a faraway look stealing across his face as he envisioned possible uses for such an item. The Grocery Outlet receipts list your total savings, and he always reviewed them with glee. "We saved 49.99!" he'd say with a chortle. But then a tragedy befell us: the city of Springfield, Ore., where the Grocery Outlet was located, passed an ordinance making it legal to discriminate against gays and lesbians. My mother, ever the activist, issued a decree: Our family was boycotting all Springfield businesses. We were no longer allowed to set foot within the Springfield city limits. My father was heartbroken.

I do believe he tried not to go to the Grocery Outlet. But one afternoon a few weeks after her decree, we pulled into the parking lot of the Springfield Dented Can. "The owners may live in Springfield, but that doesn't necessarily mean they're bigots. It's unfair to make assumptions," my dad said. He followed it quickly with "Don't tell your mother."

I might have enjoyed the subterfuge if it hadn't meant extra work. When he was done shopping, my dad and I sat in the Grocery Outlet parking lot and painstakingly peeled the distinctive fluorescent orange price stickers off of six sacks of groceries. He had planned ahead and brought bags from home, and our scheme was foolproof. This went on for years.

I have had many occasions to be grateful that I learned thrifty shopping at the feet of the masters. When I was broke and living in downtown Seattle in my mid 20s, I ate leftovers from the deli where I worked and bought the rest of my food in the International District. Uwajimaya, the Asian superstore, is a trendy Seattle destination, but I took a note from my dad's book and explored the dingier groceries that surround it: For 99 cents you could buy a package of baby bok choy three times the size of your head. I always looked for the cheapest stuff, and learned to eat some interesting items in the process.

Although I experienced a period of relative affluence that led to less inventive shopping habits, the recession has ushered me back to my roots: bulk food and bargain basements. The bulk aisle is my friend. I've done the math: One pound of dried beans costs about $1.30. A can of beans also costs about $1.30. When cooked, one pound of dried beans makes about four cans worth of beans, and of course the beans are much better. Seeking even better deals on bulk food, my husband, Rich, and I just joined our rural food co-op, which gets me wholesale prices on 25-pound bags of organic flour. Membership offers another plus: Ordering food from a catalog saves me an agonizing trip to the store.

Lately I've been so worried about overspending that the mere idea of shopping awakes a wave of anxiety. In order to scrounge enough money for a piece of electrical wire crucial to our water system, I recently had to drive back to the supermarket to return $30 worth of groceries, a singularly humiliating experience. When I'm having a miserable time at the store, I try to remember the delight my dad got from saving money. Although my parents sought free and cheap items by necessity, they managed to make it seem like it really was all about the adventure of finding good deals.

I figured a trip to one of his favorite haunts would help invoke his conspiratorial spirit. However, when I finally made it back to the Grocery Outlet, I was disappointed: Though my receipt claimed I'd saved $30, a more accurate estimate would be $15. Had the Grocery Outlet gone the way of Trader Joe's and become a pricier version of its former self? Then I realized that in trying to be thrifty, I'd written an extremely specific shopping list. I had immunized myself to impulse buys, thinking to save money. Clearly, specificity was the wrong approach. I had to start thinking like Steve.

My dad taught me this: The true budget shopper enters the store with a blank slate, looking for the best deals. The true budget shopper snaps up the best deals and worries about how to marry ingredients later. By best deals I don't mean cheapest food, but best value. On my second trip to the Grocery Outlet, I start with an open mind but (in a betrayal of my childhood self) still avoided the cheap prepackaged snack foods in favor of more multipurpose items such as olive oil, a huge bag of key limes, chorizo in a tube and yes, a hefty tin of anchovies. In its purest form, budget shopping breeds iron-chef levels of creativity and flexibility. As I trawl the aisles of the Grocery Outlet, noting the sale on orthopedic pet beds and the unstable tower of peeps, my vague idea of making chicken curry for dinner morphs into an aromatic plate of savory chorizo tacos. The total cost of the meal comes to $1.40 per person: tasty, and cheaper than your corner taqueria. My husband should just be glad I didn't try to incorporate the anchovies.