There is something fishy in Anderson Cooper's anti-Snooki tirade

Claiming to be going after the people who pay the MTV star, CNN's host forgets his own love affair with reality TV 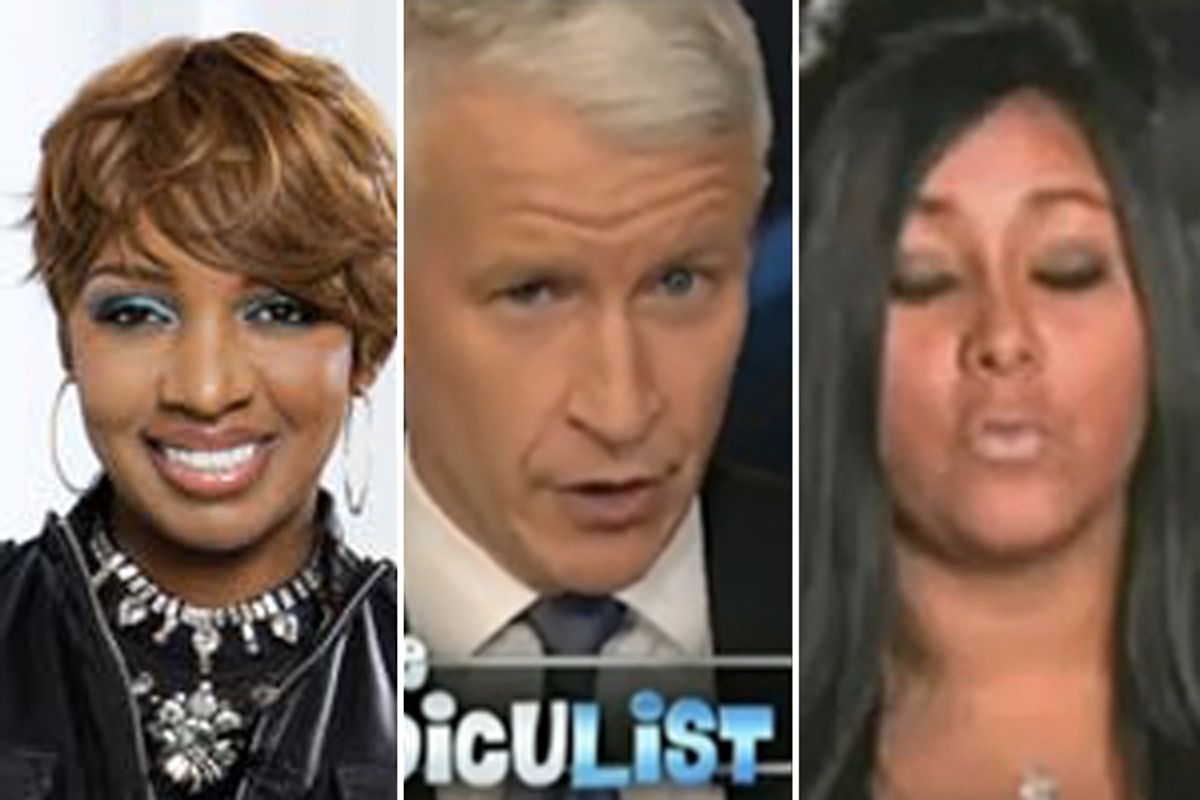 A little bit late to the party, Anderson Cooper went on a tirade this week about Snooki, everyone's favorite little guidette from "Jersey Shore" whom the CNN anchor has just now found out is making way more money than someone with her IQ-to-hair ration reasonably should. He has so many catty disses about her, it's like Kathy Griffin is back there writing notes on his teleprompter. But wait, he's not actually mad at Snooki, he's mad at the people who pay her. Okay. Still, time for some Snooki jokes!

He is so mad! And legitimately so, at least about the Rutgers University thing. But while Anderson claims to only be ridiculing the people who pay Snooki, he takes a bunch of pot-shots at the pint-size pickle herself, which seems kind of…I don't know, unfair? Like what is the purpose of comparing her book to Toni Morrison's? Just to prove how trite Snooki's ghostwriter was? Way to shoot that fish in the barrel there, Anderson.

Maybe I just especially find his anti-Snooki tirade tiresome because it comes from this moral high ground of "Who is paying for her to show up at parties and make so much money per episode?" Well, probably the same kind of producers who paid for NeNe from "Real Housewives of Atlanta" to get similar media coverage, which you happily took part in 2008.

And hey, you didn't seem to have any problem with NeNe's own cash-cow book when you gave it a blurb.

Look, I am not saying it is hypocritical to like one reality show star and not another. Some of us are just Ronnie people, and some of us are "that chick with fangs who was kicked off 'The Bachelor' way too early" people. What is hypocritical is turning on the hype machine that makes these individuals way richer than they would be otherwise when you willingly play a part in that system whenever it suits you.

You might think Snooki is worse than NeNe, or less worthy of our time. But that's not Anderson's argument: he is trying to rail against the system that gives Snooki the platform to make more money than Toni Morrison, when he willingly participates in that three-ring circus himself. (Lets not forget that Anderson hosted a reality show called "The Mole" before he ever broke it big on CNN.)

So which is it, Anderson? Are you angry because Snooki is a character you find particularly obnoxious or stupid? Or are you angry at the machine that makes reality show stars into legitimate celebrities (or at least very, very rich before their 15 minutes are up)? Because if it's the latter, you might have to include yourself on your Ridiculist.