The two-tiered justice system: an illustration 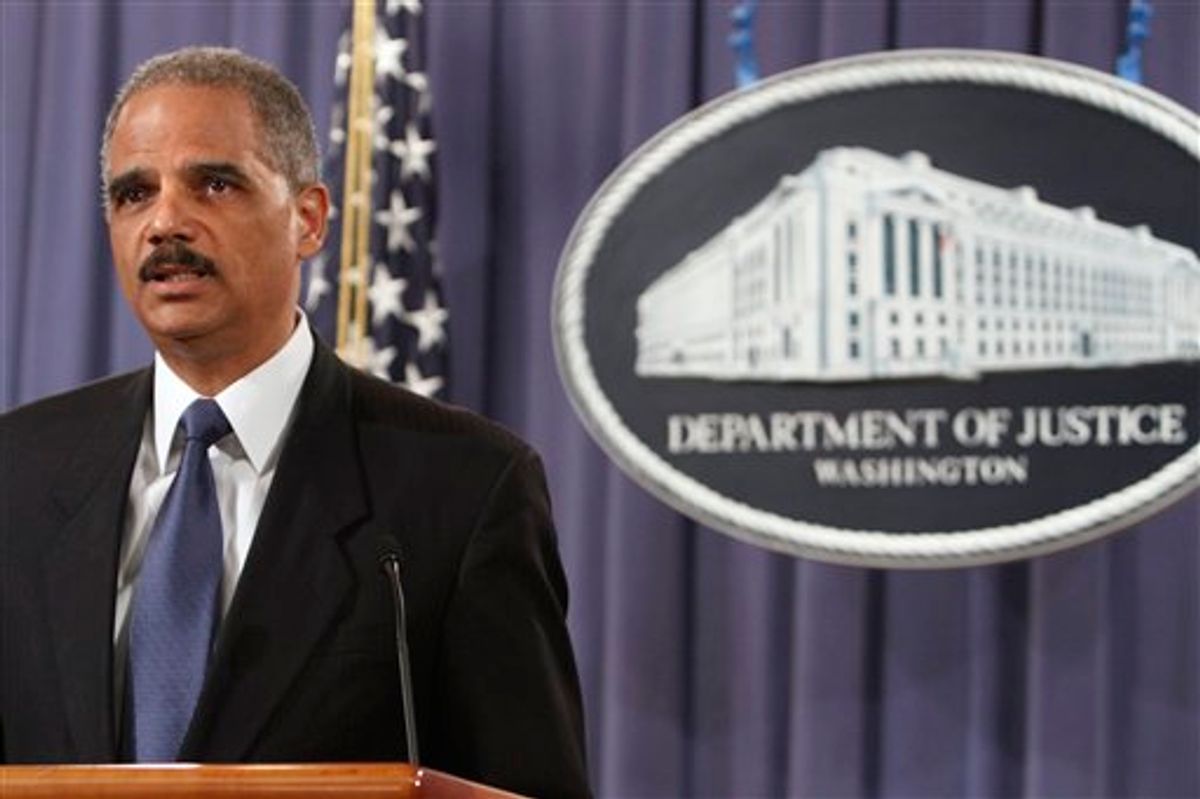 Of all the topics on which I've focused, I've likely written most about America's two-tiered justice system -- the way in which political and financial elites now enjoy virtually full-scale legal immunity for even the most egregious lawbreaking, while ordinary Americans, especially the poor and racial and ethnic minorities, are subjected to exactly the opposite treatment: the world's largest prison state and most merciless justice system. That full-scale destruction of the rule of law is also the topic of my forthcoming book. But The New York Times this morning has a long article so perfectly illustrating what I mean by "two-tiered justice system" -- and the way in which it obliterates the core covenant of the American Founding: equality before the law -- that it's impossible for me not to highlight it.

The article's headline tells most of the story: "In Financial Crisis, No Prosecutions of Top Figures." It asks: "why, in the aftermath of a financial mess that generated hundreds of billions in losses, have no high-profile participants in the disaster been prosecuted?" And it recounts that not only have no high-level culprits been indicted (or even subjected to meaningful criminal investigations), but few have suffered any financial repercussions in the form of civil enforcements or other lawsuits. The evidence of rampant criminality that led to the 2008 financial crisis is overwhelming, but perhaps the clearest and most compelling such evidence comes from long-time Wall-Street-servant Alan Greenspan; even he was forced to acknowledge that much of the precipitating conduct was "certainly illegal and clearly criminal" and that "a lot of that stuff was just plain fraud."

Despite that clarity and abundance of the evidence proving pervasive criminality, it's entirely unsurprising that there have been no real criminal investigations or prosecutions. That's because the overarching "principle" of our justice system is that criminal prosecutions are only for ordinary rabble, not for those who are most politically and financially empowered. We have thus created precisely the two-tiered justice system against which the Founders most stridently warned and which contemporary legal scholars all agree is the hallmark of a lawless political culture. Lest there be any doubt about that claim, just consider the following facts and events:

When Bush officials were revealed to have established a worldwide torture regime (including tactics which Obama's Attorney General flatly stated were illegal) and spied on Americans without the warrants required by law (which Obama himself insisted was criminal), what happened? This, from The New York Times, January 11, 2009:

And when Spanish prosecutors decided, in light of Obama's refusal, that it would criminally investigate the torture by American officials to which its citizens were subjected by the U.S., what happened? This, from Mother Jones, December 1, 2010: 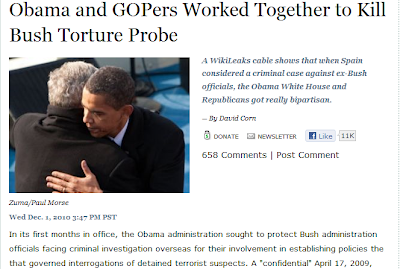 When telecoms get caught participating in Bush's illegal eavesdropping program in violation of multiple federal statutes, what happened? This, from TPM, February 12, 2008:

And when the CIA got caught destroying videotapes of its "interrogation" sessions with accused Terrorists even in the face of multiple court orders directing that they preserve such evidence -- acts which even the establishment-serving, rhetorically restrained co-Chairmen of the 9/11 Commission strongly suggested constituted "obstruction" of justice -- what happened? This, from Politico, November 9, 2010:

And when it came time to decide what to do with one of the most brazen and egregious lawbreakers in the financial world -- former Countrywide CEO Angelo Mozilo, whose fraud was so glaring that he was one of the very few to suffer any consequences (forced to pay a paltry $40 million out of his $500 million fortune) -- what happened? This, from AP, February 10, 2011:

All of that stands in the starkest possible contrast to how ordinary Americans -- especially the poor and racial and ethnic minorities -- are treated by this same "justice system": with incomparably harsh and merciless punishment. From The New York Times, April 23, 2008:

The virtually full-scale immunity now vested in political and financial elites stands in just as stark contrast to the treatment received by those who reveal wrongdoing, corruption and illegality by those elites -- from The New York Times, June 11, 2010:

And this overflowing forgiveness and generosity toward elites stands in starkest contrast to foreign nationals accused of Terrorism, who are literally rendered non-persons and denied all rights - from The Washington Post, March 11, 2011:

In a 1795 letter, George Washington vowed that "the executive branch of this government never has, nor will suffer, while I preside, any improper conduct of its officers to escape with impunity." Thomas Jefferson -- in an April 16, 1784, letter to Washington -- argued that the foundation on which American justice must rest is "the denial of every preeminence." It's literally difficult to imagine how we could be further away from those core principles. That the culprits who caused one of the worst financial crises in modern history have been fully shielded from the consequences of their acts -- set along side the torturers and illegal eavesdroppers who have been similarly protected -- illustrates that quite compellingly.

UPDATE:  In Boston last week, I recorded an interview with the ACLU of Massachusetts that included one exchange on exactly this topic.  The three-minute segment can be seen below: