Nic Cage: The genius of the full-throttle freak

At least he is never phoning it in: Why on-screen and off-, the Coppola can do anything ... except be normal 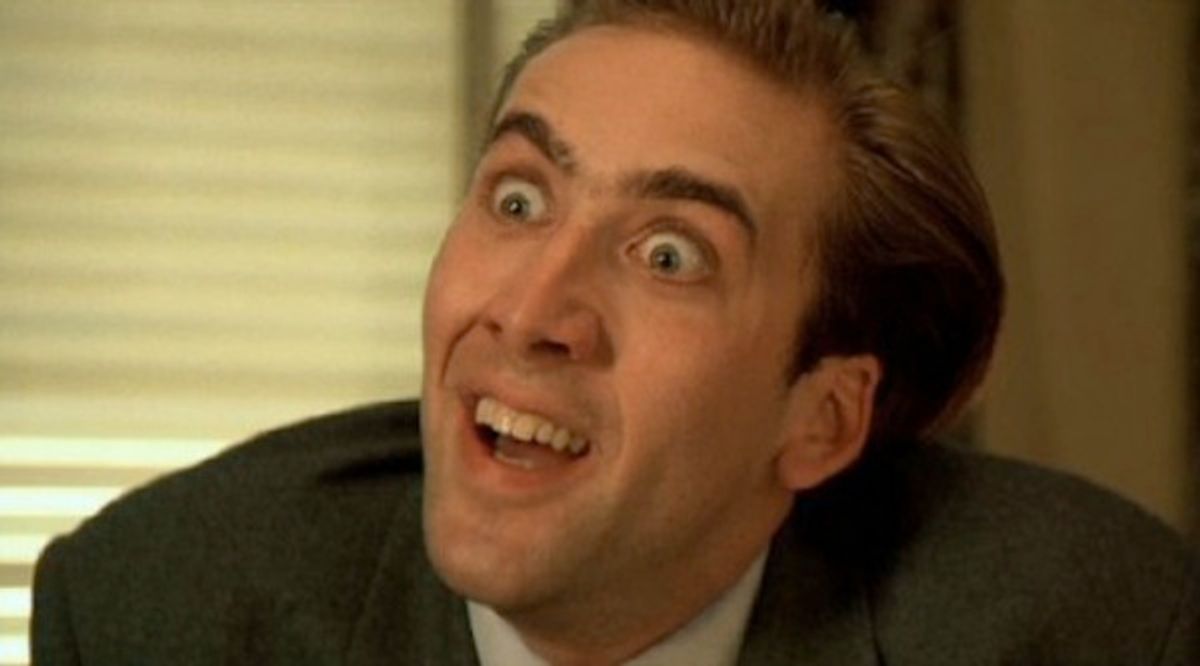 How could this face lie to you?
--

This weekend, Nicolas Cage was arrested for domestic abuse charges in New Orleans after a drunken fight with his wife. New York magazine couldn't help making the comparison to Charlie Sheen, perhaps as an apology for being  late to the "female battery" outrage train after all major media outlets glossed over that particular section of Sheen's history.

The only problem? Nic Cage was not involved in a "domestic assault." He and his wife were drunkenly arguing about which house they lived in (LOL), he "grabbed her arm," the cops came, and Nic screamed "Arrest me!" until they finally did. His wife is not pressing charges. Dog the Bounty Hunter bailed him out of jail.

Is this guy an alcoholic, freakish asshole? Maybe. But don’t compare Charlie Sheen’s abuse of women to Nic Cage fighting with his wife about what house they live in, because there is a difference between all the crazy shit Cage does, and Sheen beating up hookers, holding a knife to his wife’s throat, and having on-the-record statements from his female victims attesting to the physical violence inflicted upon them.

But more worrisome than this pseudo-slander against Cage is the claim from within our own ranks that Nicolas Cage has somehow become as fake and overblown in his real life as he reliably is in his films. From Mary Elizabeth Williams' article, "Nicolas Cage: Even his arrest is a bore":

For years now, Cage has been parlaying his loose cannon charisma and credibility as an acclaimed actor into an increasingly dreadful body of work. His fans -- and they are still many -- argue that there is a method to Cage's cinematic histrionics, that those who criticize his unorthodox performances miss the bravery of them. But I think Cage is, at this point, the Stella Artois of acting: the thing so terrible and tasteless, people assume it has to be great ... He's now become as obviously false as the CGI that so often threatens to upstage him, a middle-aged man doing a parody of his younger, over-the-top self, like an inside-out version of his Charlie Bodell in "Peggy Sue Got Married."

I would be one of those people that argue that Cage has a subversive method to his madness. In films where he is forced into a cookie-cutter role -- be it action hero ("Gone in 60 Seconds," "Ghost Rider," "Con Air"), love interest ("Trapped in Paradise," "The Family Man") or detective/journalist/guy figuring stuff out ("Knowing," "Wicker Man," "Bangkok Dangerous," "National Treasure") -- he hams it up to the point of self-parody.

And even then, he's never phoning it in. If you've ever seen the "Wicker Man" mashup, or the one for "Vampire's Kiss," it's impossible to claim that Cage is somehow boring to watch, even in terrible films.

But Cage can play it equally subtle, something people missed when they prematurely judged Werner Herzog's " The Bad Lieutenant: Port of Call - New Orleans," assuming Cage would spend the entire film frothing at the mouth. With the exception of an early scene involving a loaded gun as a sex toy, Cage keeps its relatively restrained throughout: letting viewers hold their breath for his inevitable freak-out, which comes in the film's last 15 minutes.

As for his personal life, I admit that an egomaniac blowing through his money and getting in trouble for drunken brawls is yawn-worthy. But Nicolas Cage manages to do his celebrity insanity with a panache that puts Sheen and his ilk to shame. When a Nevada bank said Cage owed them $2.5 million, what did he do? He went to Vienna and held a press conference calling for the end of international crime.

What? Yes. Amazing. That is winning, my friends.

And even after the news of his bankruptcy was made public and he was forced to put his German castle on the market, Cage had a mausoleum constructed for himself in New Orleans, where he also owns several haunted houses. The mausoleum, by the way, is shaped like the Louvre.

The examples are endless: naming his son after the role Hollywood would never give him (Kal-El or the birth name of "Superman"); the after-hour street brawls in Romania (screaming "Respect me!"); the mere existence of his other son Weston, who has this amazing "Marilyn Manson-meets-WWF wrestler" thing going on. (And his own clothing line!)

Call Nicolas Cage what you want: a hack, a megalomaniac, a legitimately crazy person who believes in ghosts and can't remember what haunted house he lives in. But boring? Never. Only Nic Cage could have taken that role from "The Rock" opposite Sean Connery and turned what was essentially the role of the straight man (He's a scientist! He doesn't know about guns!) into a work of art. His real life is no less weird or entertaining, making him the furthest thing from a "false" celebrity you can get. (Except for his hairpieces, since Nic's real follicles haven't been seen since "Leaving Las Vegas.")

And boring? You'd have to bury him in his pyramid tomb first.