Priorities in the Land of the Free

Millions of Americans are without jobs and are having their homes foreclosed.  The U.S. is currently fighting three out-in-the-open wars (or, if you prefer, one war, one occupation, and one kinetic humanitarian intervention) and several other covert ones.  Financial and political elites are preparing to tell Americans (quite unpersuasively) that they have to sacrifice Social Security, Medicare and other entitlements because the U.S. debt is so large and unmanageable that it threatens to subvert America's superior creditworthiness.  And we're constantly told that civil liberties erosions are necessary to combat the Great Menace of Domestic Terrorism.  So what is our political class focused on, and to what are law enforcement resources being devoted?  First, there's this, from a couple weeks ago:

Nearly half of the members of the U.S. Senate are urging Attorney General Eric Holder to step up federal prosecutions of adult pornography.

In a letter sent to Holder earlier this week, 42 senators encouraged Holder instruct prosecutors and FBI agents to counter what the lawmakers called "the growing scourge of obscenity in America" . . . . The signatures on the letter from socially-conservative Republicans like Sens. Orrin Hatch of Utah, Chuck Grassley of Iowa, and Jim Demint of South Carolina are unsurprising. However, some fairly liberal Democrats also joined in: Sens. Dianne Feinstein of California, Tom Carper of Delaware and Amy Klobuchar of Minnesota.

And now there's this:

In the wake of a dramatic bust by the Justice Department, the poker industry is in turmoil. Three of the major sites -- PokerStars, Full Tilt Poker and Absolute Poker -- are inoperable in the U.S. Millions of Americans accustomed to playing cards at home on the top poker websites will need to find some other way to get their poker fix.

Whether the game has a digital future in America is anyone's bet. . . The Justice Department and FBI on Friday announced charges against 11 people, including founders of three top online poker operations, alleging bank fraud, money laundering and illegal gambling offenses. The allegations relate to the poker sites' methods of accepting payments from gamblers, flouting a 2006 federal law that expressly prohibited it. . .

The legality of playing online poker for money is a murky issue. In fact, authorities are going after online poker operators, not individual players. But many regular players have found their accounts frozen by the feds, unable to access their money. "Some players have literally millions of dollars in their online poker accounts," [poker professional Brandon] Adams said. . .

The 2006 Unlawful Internet Gambling Enforcement Act made it a federal crime to knowingly accept most forms of payment for Internet gambling. That shut off access to U.S. banks, and thus, the ability to accept wagers from U.S. gamblers.

After that law passed, leading online poker companies took operations out of the United States and continued to operate. They reassured players that it was OK to continue playing because account funding was an international transaction, outside the jurisdiction of U.S. law.

As a result, if you attempt to visit what had, until days ago, been the world's largest online poker sites, this is the creepy, authoritarian image which greets you -- effectuated, of course, without the need to convict anyone of anything in a court of law: 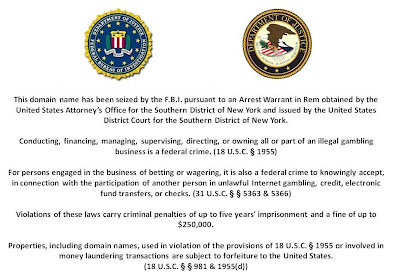 There are several points worth noting about all this.  First, imagine how the brain functions in a person who spends years and years flattering people and trolling for money in order to get to the Senate, then arrives and, after surveying all of America's problems, decides they're going to focus on stopping adults from viewing pornography and playing poker online.  What does it say about the character and judgment of someone who has those priorities and wants the U.S. Government to adopt them?

Second, Americans in general -- and the Right in particular -- love to boast about what a freedom-loving, liberty-demanding people we are.  Land of the Free, Home of the Brave.  The Rugged Individualists.  Yet one finds not a peep of protest from virtually anyone -- and especially not our small-government, restrained-federal-power "conservatives" -- over this attempt by the Orrin Hatches and Dianne Feinsteins of the world to get together and use the coercive force of law to dictate to adult citizens what they can read online and how they can spend their money for entertainment or profit.  If you're someone willing to let Orrin Hatch and Dianne Feinstein make decisions like this for you -- ones that are about as personal, private and consensual as it gets -- then on what basis do you claim to oppose invasive federal government power and rail against "politicians who think they know what's best for us"?  Tellingly, it's a liberal Democrat, Barney Frank, who has been the most outspoken opponent of online gambling bans on the ground that it's none of the government's business how adults choose to spend their money on entertainment.

Fifth, one of the most reliable rules in Washington is this:  whenever there is some liberty-abridging, pernicious, authoritarian action taken in the nation's capital, one finds the pro-war, ossified establishment oligarch Dianne Feinstein lurking behind it.  And that, of course, highlights the truth of the fourth point quite vividly.  That Donald Trump is a leading presidential candidate is an excellent symbol of America's political culture in this era, but the image of Dianne Feinstein and Orrin Hatch gathering together to decide which websites adults should be allowed to visit and how they can entertain themselves is an equally appropriate one.

Out Magazine has a newly published, lengthy profile of me that is much more personal than I'm accustomed to and typically comfortable with, but that's the nature of profiles like this.  Those interested can read it here.