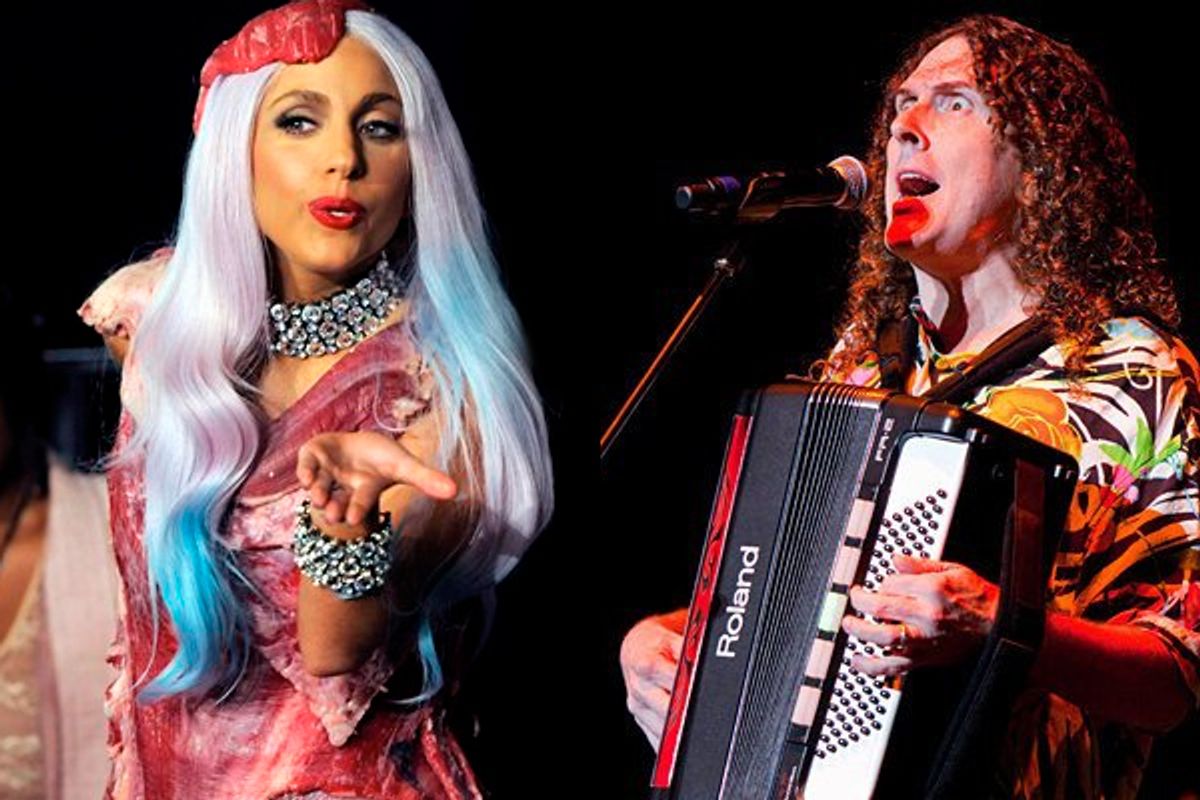 How has Weird Al ‪Yankovic‬ managed to insert himself into the cultural dialogue half a decade after his last popular hit? With a Lady Gaga feud, of course. Who better for the ridiculous accordion player/parody singer to pick a fight with than the pop star who dresses like a drag queen and hatches out of an egg? The two were basically made for each other.

Which was exactly what Weird Al thought when he contacted Gaga's people for their blessing on a "Born This Way" parody to be the first single off his new album. At first, Al had too much respect for Gaga's work to even to write the song, according to his blog:

Because it was such an earnest human rights anthem, I thought some people might consider a parody to be in poor taste. Plus, I was really kinda predisposed not to do a Lady Gaga parody anyway because, well, that’s what everybody in the universe was already assuming I would do, and I hate to be so predictable.

I know I was personally holding my breath for that inevitable Weird Al/Lady Gaga parody, so I guess he has a point there. Eventually though, Al decided that he had so much respect for Gaga that he would have to do the song: focusing on her ridiculous outfits for a number titled "Perform This Way."

Unfortunately, this song will never be on Weird Al's comeback album, because it was nixed by Lady Gaga's people after they demanded that he create a recording of it so they could "hear it." This was after Al already gave them a copy of the lyrics, which was definitely a dick move on Gaga's people's part: making Weird Al go through the trouble of going to the studio for a song only to pass on it.

This isn't the first time Weird Al has been denied song rights: Prince, James Blunt (well, Atlantic Records anyway), Paul McCartney, and Jimmy Page have all turned down having their work turned into another "Amish Paradise." Al claims that his music falls under "fair use," and so technically he could record and sell any song parody he wants, although "it has always been my personal policy to get the consent of the original artist before including my parodies on any album."

So although "Perform This Way" won't be making him any money, Weird Al has leaked the track on YouTube and wrote a lengthy diatribe on his blog. Hey, he didn't do all that work for nothing, right? Though ultimately, maybe Lady Gaga's people actually helped Weird Al. After all, it got us talking about him again, didn't it?