Why can't Kirstie Alley be honest about her size? 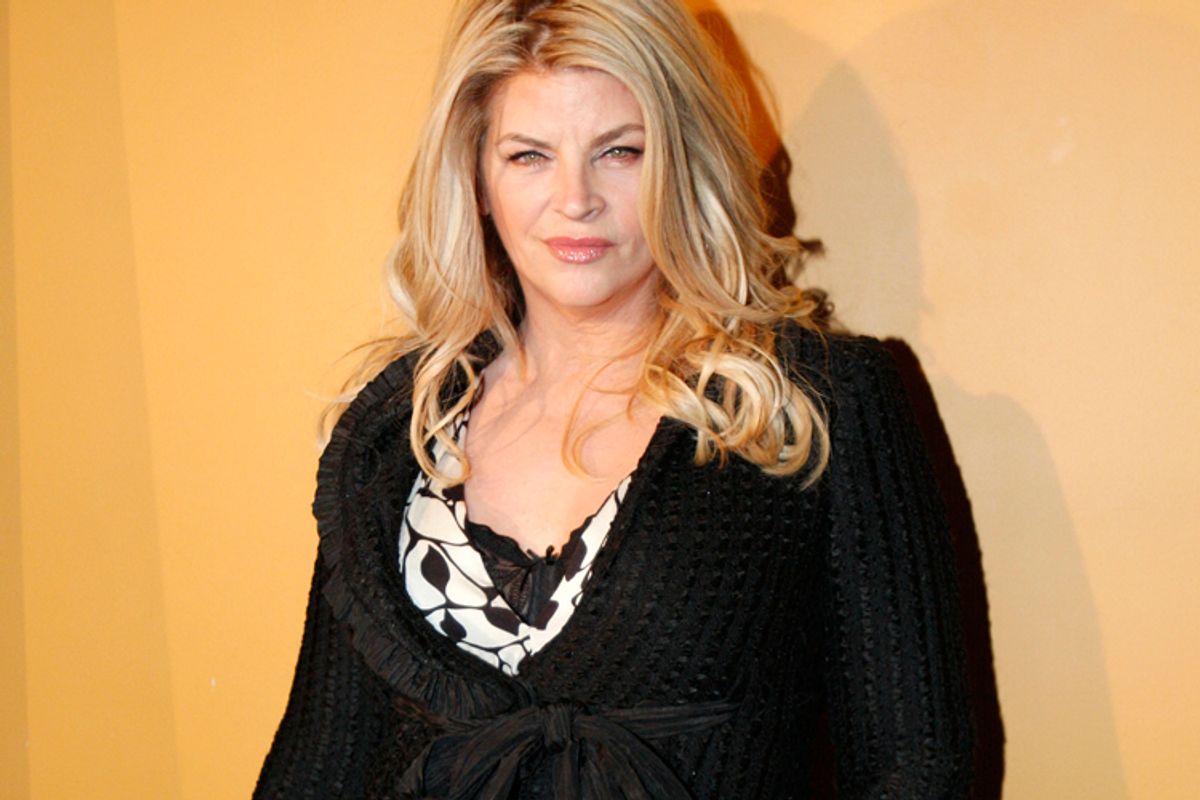 The only occupational hazard more deadly for a woman in Hollywood than getting old is getting fat. For years, Kirstie Alley has been famously -- and wittily -- confronting our cultural craziness over size, in her comedy series "Fat Actress" and her reality show "Kirstie Alley's Big Life." More recently, she's been shimmying her way into America's heart as "Dancing With the Stars'" pluckiest, most mishap-prone contestant. But when she bragged to the Daily Mail this week that "I bought these dresses from a size 12 to a 2. Tonight I'm a 6. When I'm a 2, I'm done, people!'" it seemed she was doing a little rumba around the truth. The last time I heard a number that unbelievable, Jon Kyl was talking about abortion. Because as any woman who's had a jeans-related breakdown in the dressing room could tell you, no effing way.

Why would the former Jenny Craig spokeswoman, who has cha-cha'd up and down the scale for years, make a claim so dubious? It wouldn't have anything to do with the new weight loss program that she's debuting this weekend on QVC, would it? The website for her $139 "Organic Liaison" touts Kirstie's promise: "I'm down to a size 6 and still counting, thanks to Organic Liaison!" Why, it's simple math: Tiny dress sizes sell diet systems.

Weight can really do a number on a person -- literally. That's why those weigh-ins are so dramatic on "The Biggest Loser." That's why the practices of vanity sizing and gamed Snackwell portion sizes exist: to sell a nice mental boost to the consumer. Oh, Ann Taylor, I know I couldn't possibly have dropped a size on the walk over from J. Crew, but I do find your pants very flattering. In every sense of the word.

Alley claiming she's a 6 -- when she happens to have a product to sell -- offers the dream of 6-ness to others, however arbitrary that number may really be. It proves the persistent tyranny of digits -- on a dress, on a scale. It's not enough to look good; it's got be quantified. Are you 12 good or are you 8 good? As the Fashion Foie Gras blog explains eloquently, "Kirstie Alley, you are not a size 6 and you probably never will be a 2 unless you become a complete anorexic or decide to wear ill-fitting dresses for the rest of your life. But you know what, there's nothing wrong with that. Nothing wrong with that at all because you are beautiful as you are right now as someone who is looking to become healthy through proper diet and exercise." Exactly.

The irony in all of this is that Alley, at age of 60 and nowhere near the neighborhood of a size 2, is smoking hot. Dancing to "American Woman" this week, she looked the best she has in years: healthy and active, vibrantly alive and flagrantly flirty and sexy. So rather than trying to sell an illusion, why not celebrate an enviable reality? Plenty of women half her age and a fraction of her size would kill to have that much beauty, sass and plain old oomph. And though creative sizing may sell diet plans, if you want to measure a woman's worth, the tag inside her ballroom gown is the last place that matters.