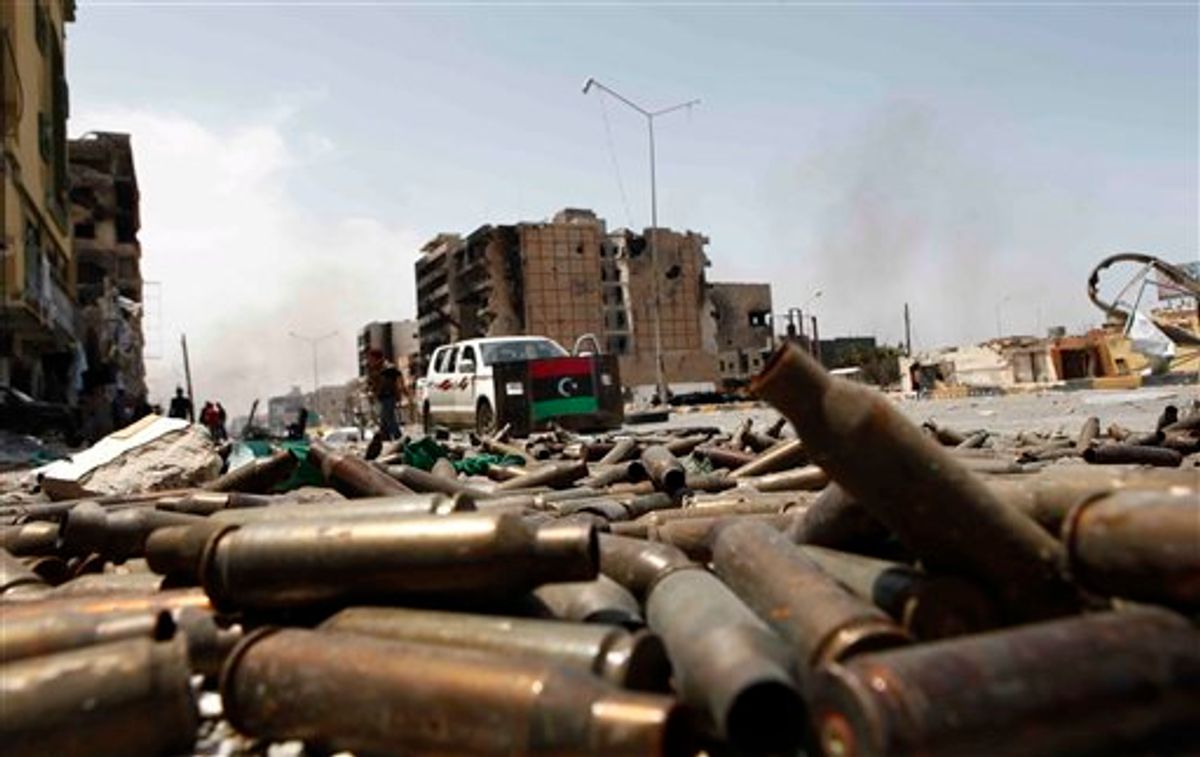 Bullet casings litter a street in the besieged city of Misrata, Libya, Saturday, April 23, 2011. Government troops retreated to the outskirts of Misrata under rebel fire Saturday and the opposition claimed victory after officials in Tripoli decided to pull back forces loyal to Moammar Gadhafi following nearly two months of laying siege to the western city. (AP Photo) (AP)
--

Heavy fighting raged anew in Misrata and killed 24 people Saturday as Moammar Gadhafi's forces gave up more ground inside Libya's third-largest city. The U.S. said its first Predator drone attack in the country destroyed a government rocket launcher that had menaced civilians in the western city.

Hundreds of people have been killed in rebel-held Misrata in a two-month government siege backed by tanks, mortars and snipers. On Friday night, the regime said it was withdrawing its military forces and allowing armed tribesmen to take over the battle. But the opposition was skeptical about the claim, saying it doubted Gadhafi's troops would fully depart.

"Gadhafi forces are moving back," said Safi Eddin al-Montaser, a rebel spokesman in Misrata. But he added: "People are still nervous because we don't know the next step of Gadhafi's forces."

Jalal el-Gallal, a spokesman for the rebels' leadership council in their stronghold of Benghazi, said he doubted the regime will fully withdraw from Misrata. He claimed the rebels firmly control the city.

Misrata, the only major rebel stronghold in western Libya, has become the most dramatic battleground in the Libyan uprising, which began in February after similar revolts in Tunisia and Egypt ousted longtime leaders. Fighting elsewhere in the country is at a stalemate, even with NATO airstrikes that began last month.

Residents reported heavy fighting, shelling and explosions in the east and south of Misrata and doctors said the day was one of the bloodiest in weeks. At least 24 people were killed and 75 were wounded, many of them critically, said a doctor at a Misrata hospital who asked to be identified only by his first name because he was afraid of government retribution.

He said that hospital officials who feared a strong attack Saturday had moved out some patients a day earlier to make way for more casualties.

Pro-Gadhafi troops in central Misrata -- including snipers who had terrorized residents for days atop an eight-story building -- were either flushed out or withdrew in the last two days in what the rebels considered a victory. That enabled some people to venture out into the battle-scarred streets and allowed fighters to set up new checkpoints at the entrance to the city and along some blocks.

"The people began breathing freely," one resident said during the day, although he added that rebels were still wary of pro-Gadhafi brigades who may have melted into the population.

There was no sign of celebrations in the streets. Traffic had returned and there were long lines for bread and gasoline, signs of the distress that the prolonged siege has caused in the city.

"People are very happy," al-Montaser added. "It feels like a victory, but they will feel happier when all of Misrata and Libya is free."

In some vacated buildings, rebels found that the Gadhafi forces had left behind booby-trapped bodies that were wired to explode if they were moved, al-Montaser said.

"We will leave it for the tribes around Misrata and the Misrata people to deal with the situation in Misrata," Kaim told reporters.

However, Misrata is not known to have very large or dominant tribes, and rebels in Misrata questioned how much support Gadhafi had among them.

NATO said a U.S. Predator drone destroyed a multiple rocket launcher Saturday in the Misrata area that was being used against civilians. The Pentagon said it was the first attack carried out in Libya by one of the drones, which began flying missions in the country on Thursday.

In eastern Libya, which is largely controlled by the rebels, other NATO strikes smashed more than two dozen sedans and pickup trucks belonging to government forces about halfway between Ajdabiya and the strategic oil town of Brega, said rebel battalion commander Col. Hamid Hassy.

President Barack Obama approved the use of armed Predator drones to improve the precision of strikes on Libyan government forces. Predators had previously been used in Libya only for surveillance. The low-flying Predators have been used in Pakistan to kill militants and are suited for urban combat.

The front in the east has been stalled between Brega and Ajdabiya for weeks. NATO stepped into the Libyan fighting in mid-March, unleashing airstrikes against Libyan military targets as part of a U.N. mandate to protect civilians.

In the capital of Tripoli, the government took reporters on a tour of a site near Gadhafi's sprawling compound that apparently was struck by two NATO missiles early Saturday. They said the attack caused no injuries.

Reporters were shown two craters next the Bab al-Aziziya compound laying bare what looked like a bunker system. Libyan officials said the space was a parking lot but a series of olive-colored metal boxes near the crater suggested it was being used for military activities.