Gadhafi's grip on western Libya may be slipping

Rebel forces, aided by NATO, have made significant gains in Gadhafi territory in recent days 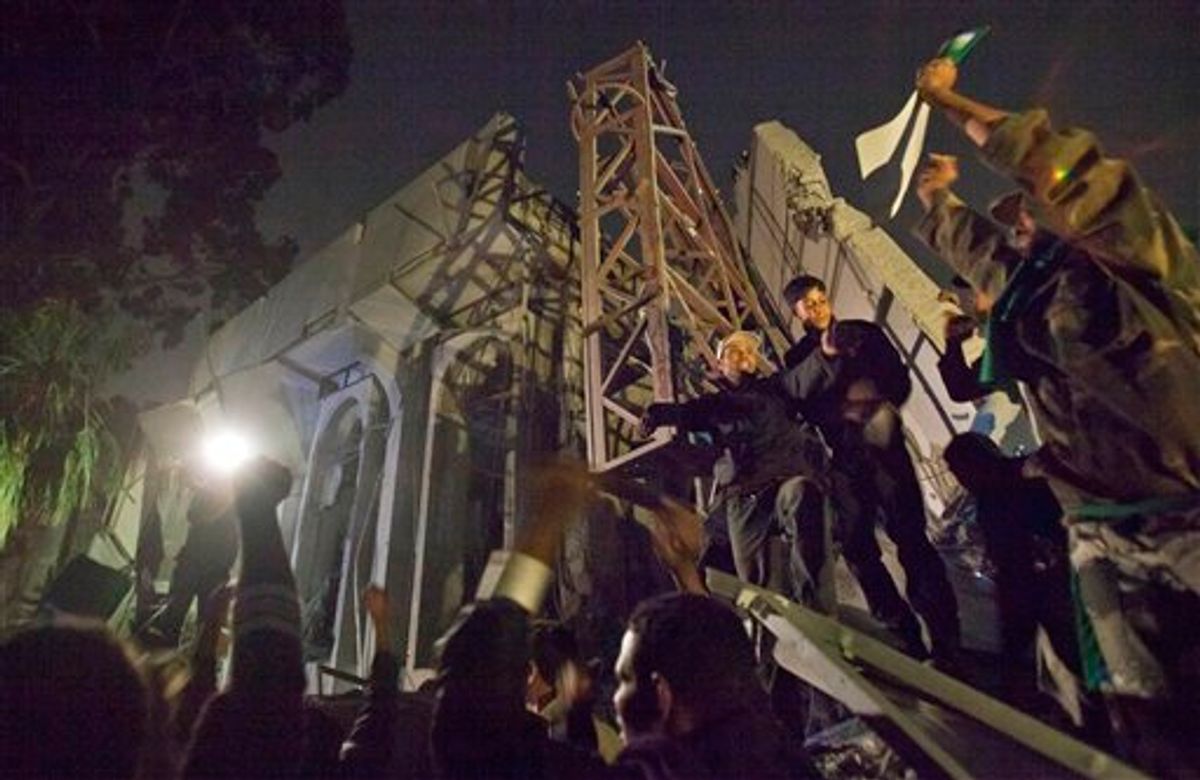 Moammar Gadhafi has suffered military setbacks in recent days in western Libya, a sign that his grip may be slipping in the very region he needs to cling to power.

His loyalists were driven out of the city of Misrata, a key rebel stronghold in Gadhafi-controlled territory. A NATO airstrike turned parts of his Tripoli headquarters into smoldering rubble. And rebel fighters seized a border crossing, breaking open a supply line to besieged rebel towns in a remote western mountain area.

Front lines have shifted repeatedly in two months of fighting, and the poorly trained, ill-equipped rebels have given no evidence that they could defeat Gadhafi on the battlefield. The Libyan leader has deep pockets, including several billion dollars in gold reserves, that could keep him afloat for months.

Yet Gadhafi appears increasingly on the defensive. And some see the past week as a turning point in the fighting, citing mounting military and political pressure on Gadhafi.

Hundreds of coalition airstrikes over the past five weeks have steadily eroded his fighting power. NATO says it destroyed one-third of his military equipment, pinned down troops and cut off supply lines.

The introduction last week of armed Predator drones -- agile low-flying aircraft better suited to urban combat than high-altitude warplanes -- has made it harder for the army to hide his tanks and rocket launchers in civilian areas.

NATO appears increasingly willing to go beyond purely military targets and strike at symbols of the regime, such as the library and reception hall in Gadhafi's residential complex badly damaged by two powerful bombs earlier this week.

At the same time, international sanctions and the exodus of hundreds of thousands of foreign workers have disrupted daily life on the home front, including in Tripoli, the Libyan capital and Gadhafi's power base. Motorists wait in line for days to fill up their tanks. Prices are up, cash is in short supply and the economy is largely paralyzed.

Even if most Libyans were to blame NATO, the hardships send a strong message that life won't return to normal so long as Gadhafi remains in power. It's impossible to gauge the level of popular support for the regime because of government restrictions on reporting. But there are signs -- hushed comments to reporters on the streets of Tripoli, for example -- that the Libyan leader's popularity is waning.

If government troops lose more ground in coming days, "we could be witnessing the beginning of the end" for the Gadhafi regime, said Riad Kahwaji of the Dubai-based Institute for Neareast and Gulf Military Analysis.

It might not necessarily be quick or play out on the battlefield.

Instead, the regime might collapse from within if military victory or hanging on to western Libya seems no longer possible. "The key to the next stage of this conflict will be the psychology of those still supporting the regime," said Malcolm Chalmers of the Royal United Services Institute, a London-based think tank.

One turning point was the Libyan military's withdrawal from Misrata, a city of 300,000 and the main rebel stronghold in western Libya. Over the weekend, Gadhafi's troops pulled back to the edges of the city, with government officials claiming it was a voluntary redeployment to enable tribal leaders in the area to negotiate with the rebels.

Rebels, however, say they drove out Gadhafi's men, who for nearly two months had controlled parts of the center of town with tanks and snipers' nests on high-rise buildings. Even after the pullback, Libyan forces barraged Misrata with dozens of rockets every day, inflicting some of the heaviest casualties of the past two months.

It's unclear if Gadhafi loyalists have abandoned efforts to recapture Misrata for good or are simply regrouping.

The army's failure to control the city would likely close the door to a permanent partition of Libya into a Gadhafi-run west and a rebel-controlled east.

Other than an outright military victory by Gadhafi, now unlikely because of NATO's shielding of the rebels, partition would be the only scenario in which Libya's ruler of 42 years could expect to cling to power. Rebel leaders have said they will lay down their arms and negotiate a political solution only if Gadhafi and his family step aside.

If regaining Misrata is out of reach, even ardent Gadhafi supporters may lose faith, said Chalmers, the British analyst. "Increasing numbers of people in the regime are asking how does it all end and how can we come to a negotiated end of this conflict, which would inevitably involve the departure of Gadhafi and his family," he said.

At the start of the uprising in mid-February, Gadhafi cracked down hard to suppress unrest in Tripoli, a city of more than 1 million, and opposition forces there remain largely underground. Gadhafi also recaptured western towns where rebels had taken control, including Zwara and Zawiya along the Mediterranean coast.

On a drive Saturday to Zwara, about 110 kilometers (70 miles) west of Tripoli, there were signs of a tight government clampdown, along with reminders of the previous heavy battles, including facades with bullet holes and scorch marks from burning tires on the road. Troops manning checkpoints along the main highway conducted spot checks of cars, especially those with several male passengers. Some drivers were asked to step out and open their trunks.

In Sabratha, 50 miles (75 kilometers) west of Tripoli, three pickup trucks with gunmen and machine guns mounted in the back were seen speeding through town. "There is no freedom," said a 40-year-old resident, watching from the side of the road. He said he has a medical supply business, but would not give his name for fear of reprisals.

In Zwara, a town of 45,000 that had been under rebel control for more than 20 days, local leaders said the fighting has left the local economy in a shambles.

Fawzi Adiri, a local trader, said the fighting halted what he felt would have been a better future for the town, home to members of the ethnic Berber minority. He said that after years of neglect of the Berbers, the government had recently invested in Zwara, including building a university and arranging interest-free housing loans for the poor.

Adiri said the rebel takeover created chaos in Zwara, and local leaders participating in a government-sponsored tour by foreign journalists said they were relieved the army assumed control again.

However, Berber towns in Libya's western Nafusa mountains have joined the rebellion. After days of fierce fighting, rebels in that area seized control of the Dhuheiba border crossing into Tunisia last week, establishing a vital supply line. Thousands of residents of the towns and villages in the area have fled to Tunisia as fighting continues there.

The Gadhafi regime is digging in.

Government forces continue to shell Misrata from their positions on the outskirts, even as mounting civilian casualties each day only deepen the regime's isolation. Gadhafi's son Seif al-Islam, once pegged as a possible successor, insisted this week that millions still support his father.

Such bluster and defiance may be part of an attempt to improve leverage when the time comes to negotiate an exit deal, including immunity and exile, said Mustafa Alani of the Gulf Research Center in Dubai.

The longer Gadhafi can sustain the fighting, the better will be his bargaining position, said Alani, adding that "the regime now understands that they have no chance to survive."