Tribeca: Return of a moviemaking madman

Tony Kaye made the near-classic "American History X" -- and blew up his career. Can "Detachment" bring him back? 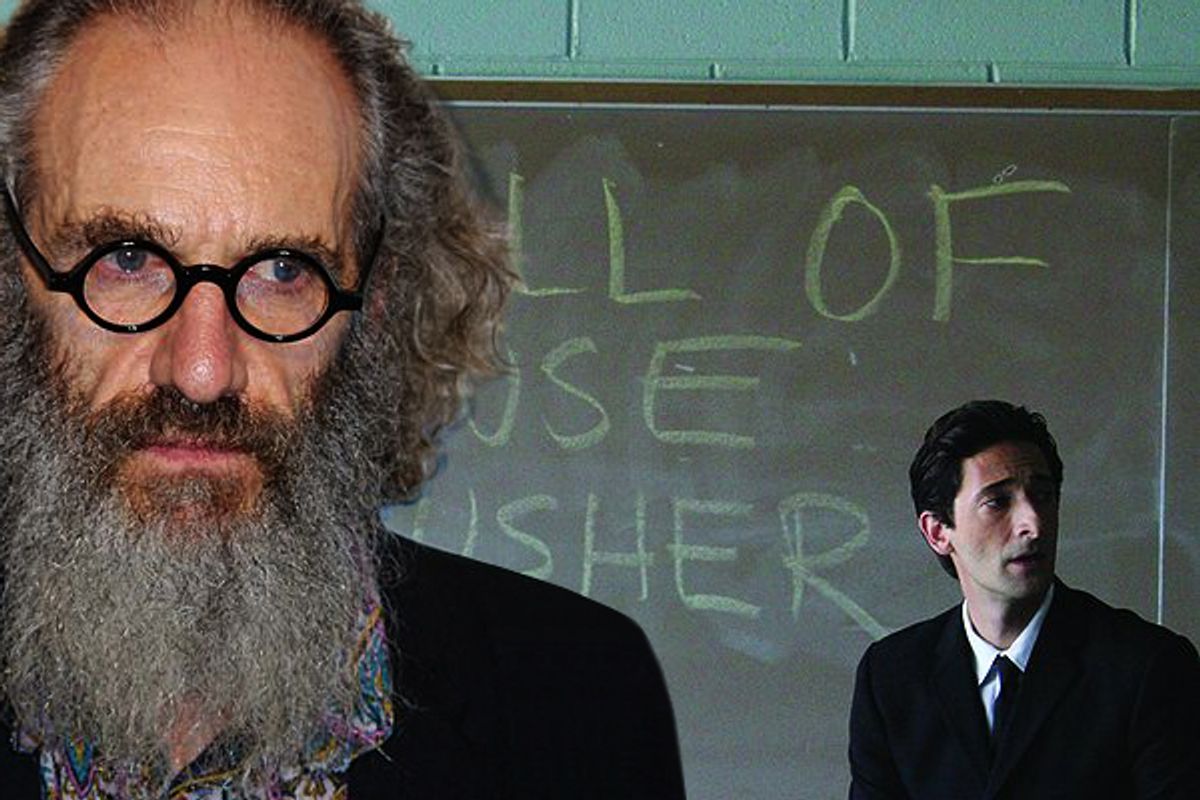 Tony Kaye and a still from "Detachment"
--

The turning point in Tony Kaye's new movie, "Detachment" -- which, despite many nameable flaws, is a wrenching and powerful achievement -- comes when Lucy Liu, playing a high school guidance counselor, suffers a major breakdown in front of a student. It's easy to be callous, she shrieks at the bored and bewildered girl in front of her, easy not to give a shit. What takes courage is actually caring about yourself and the world. Sure, you can call that a hackneyed sentiment, and some people won't get past the fact that "Detachment" is delivering a familiar message in a familiar setting. But two things redeem the scene, at least for me: 1) What Liu says is absolutely true, and it is one of the central problems in contemporary life, and 2) she's not saying it from some position of cool, removed wisdom; she's pissed off, filled with rage, and completely losing her shit at a girl whose only crime was announcing that she doesn't care about school and wants to be a model.

"Detachment" might be the biggest conversation piece I've seen so far at this year's Tribeca Film Festival. It's a scattershot, melodramatic would-be epic set in and around a New York high school, with a tremendous cast headed by Oscar-winner Adrien Brody as a substitute teacher struggling with his own barren emotional life. (It also stars Christina Hendricks of "Mad Men," James Caan, Marcia Gay Harden, Blythe Danner and Liu.) It's an everything-including-the-kitchen-sink kind of movie with a Fellini level of ambition. Kaye blends animated sequences along with dreams, memories and fantasies, mini-interviews with real-life teachers, dogmatic lectures about the failings of our society, and quotations from Albert Camus and Edgar Allan Poe. Carl Lund's screenplay hits a lot of flat notes and the acting is uneven, but ultimately I didn't much care -- I was swept along by the spectacular visual journey and the wrenching emotional experience. People will either love "Detachment" or hate it, and either way it provides powerful testimony to the unrivaled passion and undiminished craft of director Kaye, whose notoriety in the film industry is matched by his near-total invisibility to the general public.

If you've heard of Kaye at all, it's almost certainly because of his 1998 debut feature "American History X," which is now a revered cult film but was a historic flop on its initial release, plagued by an entertaining and highly public three-way feud between Kaye, star Edward Norton Jr. and distributor New Line Cinema. Kaye tried to get his name taken off the film and replaced with the credit "Humpty Dumpty" (even threatening to legally change his name to that effect). He reportedly suggested -- after the film was shot, edited and in the can -- commissioning a new script from Caribbean poet Derek Walcott and starting over again from scratch.

Indeed, once you start with the Tony Kaye stories, you don't want to stop. He spent $100,000 of his own money on ads in the Hollywood trade papers abusing Norton and the film's producers, which I guess echoes the time when -- as a nearly unknown advertising director -- he bought an ad in a London broadsheet announcing that "Tony Kaye Is the Greatest English Director Since Hitchcock." He once shot more film for a 30-second Volvo commercial than Woody Allen had used in making "Hannah and Her Sisters." At the peak of his advertising success in the mid-'90s, he used to buy one of every item in the seasonal Comme des Garçons catalog. As he told a British interviewer a few years ago, "I did a lot of very insane things. A lot of very, very, very insane things."

With his filmmaking career in ruins after the "American History X" debacle, Kaye briefly came under the wing of Marlon Brando, who hired him to film a series of seminars Brando was leading with Michael Jackson, Sean Penn and Jon Voight. (Of all the unfinished Kaye projects, that one may be the strangest.) But Kaye's penchant for showing up at Los Angeles nightclubs dressed as Osama bin Laden -- in the fall of 2001 -- succeeded in alienating even the legendarily antisocial Brando, who died before the two could manage any reconciliation. So began Kaye's period in the outer wilderness of the entertainment industry, before he began to work his way back by actually completing his memorably gruesome 2007 abortion documentary "Lake of Fire," most of which had been shot during the Clinton administration.

I'm not Tony Kaye's shrink and I'm not sure it's worth speculating about why he did all the crazy things he did; when I interviewed him at the time "Lake of Fire" was released, he explained it all as a kind of act, in emulation of idols like Erich von Stroheim or Francis Ford Coppola. "All the work of the directors I really liked," he said, "those directors seemed to be tyrannical, egotistical, arrogant, mad. They were my gods, so I thought, 'Well, I'd better be like that.' I'm not really like that." That sounds like clear-sighted rearview analysis, but I'm not sure it's adequate. When I ran into Kaye the other day in the Tribeca press room, I didn't recognize him. When we met in 2007 he was bald, but he now has a Rasputin beard and non-haircut, and was approaching journalists with a hand-lettered paper sign that read, "I HAVE A SPEECH PROBLEM. MY NAME IS TONY KAYE ('American History X'). I WANT TO TALK TO YOU ABOUT MY MOVIE 'DETACHMENT.'" (Kaye did have a speech impediment in childhood and says he avoids talking on the phone, but you'd never notice it in ordinary conversation.)

Yes, it would be great if we could talk about "Detachment," because the other side of the Tony Kaye story is that he's such an intriguing and irresistible character that he throws his own movies into the shade, and that's not serving his interests or anybody else's. The thing is, in announcing himself as the greatest English director since Hitchcock back in 1980-whatever, Kaye was being an arrogant jackass, but his insight into his own potential wasn't necessarily wrong. In some alternate universe a few ticks away from ours, things went a little differently before or during or after "American History X" and Kaye is now widely seen as one of the greatest living filmmakers, along with Scorsese and the Coens and Darren Aronofsky and whomever else you'd like to nominate.

But that universe isn't this one, and it's anybody's guess how much of a comeback Tony Kaye can mount at age 58, with the manner of a 19th-century European anarchist and a heavily allegorical high school drama that's going to sound, the more I describe it to you, like about seven (or 17) other movies you've already seen. It's got a terrific central performance from Brody, maybe his best since "The Pianist," but many of the other elements -- the sympathetic fellow teacher he starts dating (Hendricks), the hardass but well-meaning principal (Harden), the teen hooker he adopts off the street (newcomer Sami Gayle) -- seem like stock archetypes, at least until you actually sit down and watch the film.

Some distributor is going to have to take a chance on "Detachment" and endure a certain amount of critical derision. It's probably worth it, partly because Tony Kaye still has cinematic talent to burn, but even more because of what he can do with it, even in a highly imperfect movie that uses the pointless but noble struggle of high school to stand in for lots of other pointless and noble forms of struggle, like making movies and being alive. What I take away from Tony Kaye's struggle is that he may have been a difficult personality -- and may still be one -- and expended way too much energy early in his career on behaving like an asshole, but he has never, ever, surrendered to cynicism or callousness. He cares passionately and prodigiously about everything he's ever done, arguably too much. If he has thrown away a once-promising career as a result, then his failure is better than most people's success.