The singer and the first lady are promoting physical education. Too bad her husband is helping to kill it 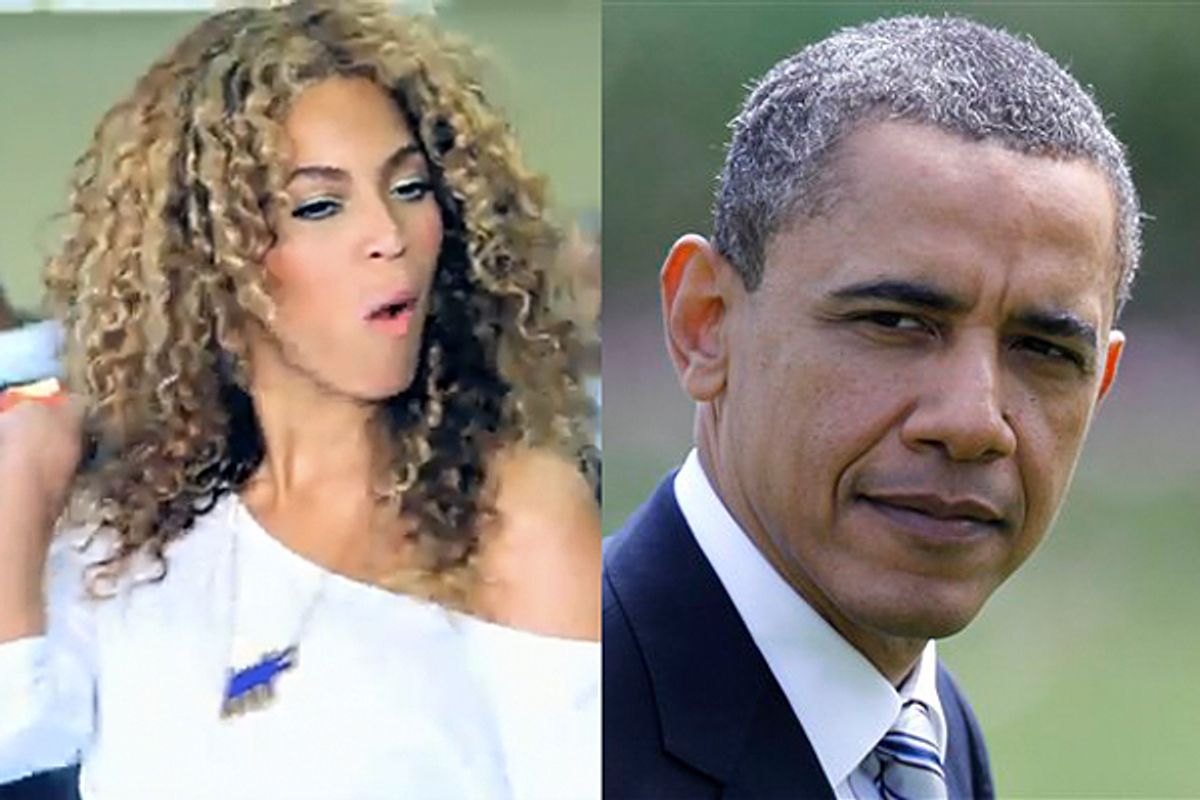 How does Michelle Obama want to fight childhood obesity in America? By promoting healthy eating choices, regular activity, and a little Sasha Fierce. In a video released Wednesday from the NAB Educational Foundation, a high-heeled Beyoncé leads a cafeteria full of kids in a rousing invitation to "Move Your Body." And on May 3, middle school students across the country will participate in a simultaneous performance of the song, with a little help from the NABEF's instructional videos of the choreography. Recess just got funky – if only for one day.

The public service-spirited campaign, part of Michelle Obama's Let's Move! initiative, is certainly a decent two-step in the right direction. Childhood obesity has tripled in America in the last three decades. And with no turnaround in sight, it's a deepening crisis with significant long-range consequences – and one that is disproportionately affecting low-income and minority children. The health problems associated with being overweight and obese in childhood range from increased risk for Type 2 diabetes, heart disease and high blood pressure to the immediate and very real threats of eating disorders, self-esteem issues and bullying.

So for Beyoncé to give some of her time and considerable energy to encouraging activity – and doing both an English and Spanish version of the song and dance tutorial -- is an acknowledgment of both the problem and the way it specifically affects different communities. But in the midst of the Let's Move! campaign to raise "a healthier generation of kids," there is an awful lot of backward shuffling going on. Because if Mrs. Obama really wants to champion better health for America's kids, maybe she should start lobbying against her husband's misguided Race to the Top and its overemphasis on "standards and assessments that prepare students to succeed in college and the workplace and to compete in the global economy."

As the author and education expert Diane Ravitch wrote last year, a test-scores-based curriculum – and the slash-and-burn tactic decimating the staffs at "underperforming" schools – is rapidly creating a culture of "teaching to the test" and meaning "less time available for the arts, science, history, civics, foreign language, even physical education." The Race to the Top fund pushes physical activity to the realm of "after-school opportunity" rather than a meaningful part of the school day.

My children's school, in a low-income, predominantly minority neighborhood, does not have a physical education class. Activity is limited to 15 minutes of recess a day – a luxury many public and charter schools don't provide at all. Our parents and teachers fought for and won, for one half of last year, an after-school basketball program for the upper grades, and for one half of this year, an after-school dance program for the lower grades – time that has been valuable but vastly inadequate and inconsistent. We are lucky to live in an area abundant in parks and playgrounds, in a community obsessive about baseball and softball, with multiple leagues to choose from. The children in my neighborhood at least have options outside the school day (though they have a 40 percent obesity rate anyway).

It's always, ultimately, the responsibility of parents to raise children who don't think football or tennis are just games you play on the Nintendo DS. But either the health of America's children is a real priority for this administration or it isn't. And it's hypocritical for Team Obama to say it's committed to fighting obesity as it encourages an educational system of overtesting, excessive homework and profound stress on children while it simultaneously decimates their chances for giving real time, energy, and discipline, on a regular basis, to physical activity. And it's also plain stupid – kids who do sports get better grades anyway.

The obesity-related health mess we're in won't go away overnight. But it won't go away at all if we don't agree that education and testing are not the same, and that you don't need to be sitting at a desk to learn the things that will help you for the rest of your life. As Beyoncé sings, "A little sweat never hurt nobody." And if you want to get kids to move, it's got to be for more than the length of a song.