"Cave of Forgotten Dreams": Herzog's dazzling journey to the dawn of art

Pick of the week: The legendary cinematic madman explores the dawn of art and opens up new possibilities for 3-D 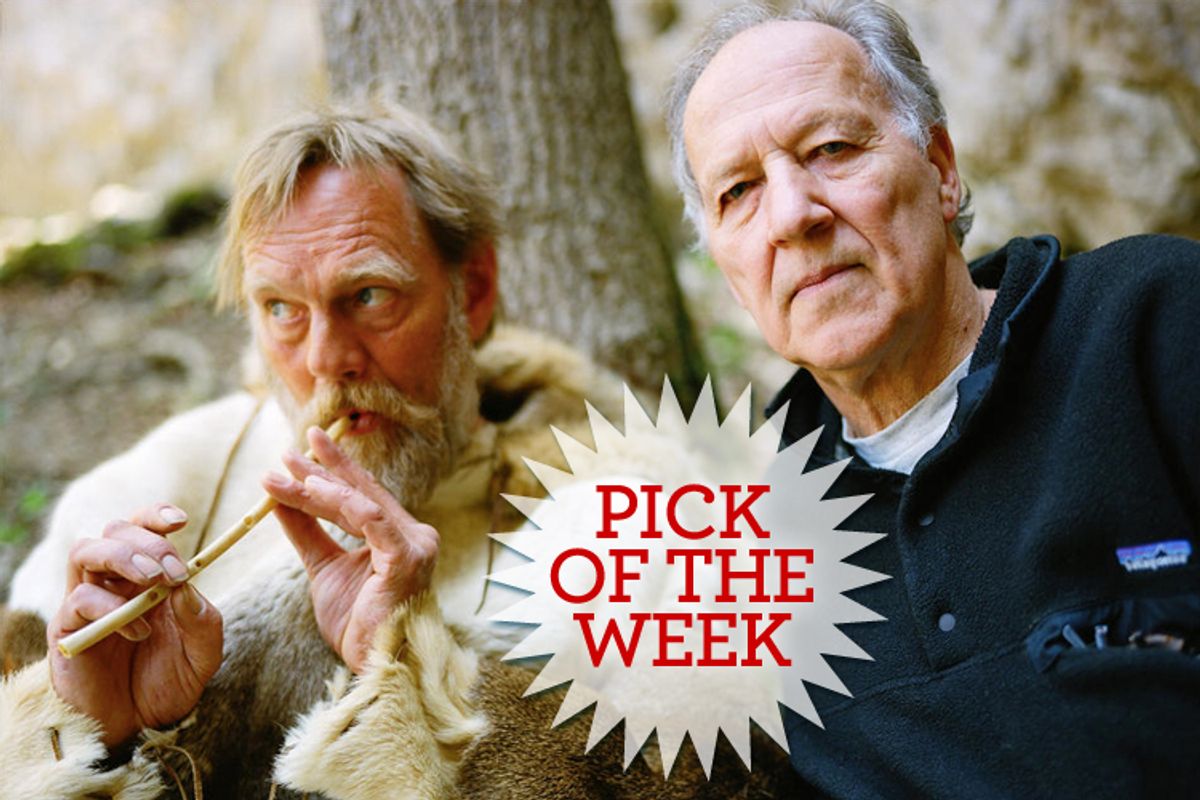 Editor's note: This is an expanded version of Andrew O'Hehir's original review of "Cave of Forgotten Dreams," published last fall from the Toronto International Film Festival.

Something like 20,000 years ago, a rock slide sealed up the entrance to a large cave set into a limestone cliff above the Ardèche River in southern France. As far as scientists can tell, no human being entered it again until 1994, when a trio of explorers wedged themselves through a tiny aperture and made one of the most extraordinary discoveries of cultural history: Chambers upon chambers of spectacular prehistoric art, both figurative and abstract, including images of many extinct species of Ice Age animals. You and I will never see any of this, except with the help of Werner Herzog's strange, flawed and mesmerizing 3-D film "Cave of Forgotten Dreams," which premiered last fall at the Toronto film festival and is now reaching North American theaters. (It will be screened in both 3-D and 2-D versions, and while the augmented experience is certainly remarkable, the film is worth seeing in either format.)

Let's go over that again briefly: Werner Herzog has made a 3-D movie that's almost entirely set inside a cave full of Stone Age art. His producer, Erik Nelson -- a professional friend and an occasional Salon contributor -- jokes that Herzog is the first director of the recent 3-D renaissance to use the technology for good, not for evil. That's not entirely fair, but it's close. Certainly Herzog has opened up new aesthetic and journalistic possibilities for 3-D, and almost new spiritual possibilities as well, in terms of evoking unusual and specific experiences and environments in ways conventional cinema can't. Secondly, yes, the art is beautiful, even stunningly accomplished, and these images are breathtaking -- unlike anything you've seen before or will see again. And thirdly, just to bring this down to the level of user experience, yes, "Cave of Forgotten Dreams" will become a classic drug movie almost immediately, although the experience is mind-altering enough without any augmentation.

What is now known as the Chauvet Cave (after Jean-Marie Chauvet, who led the exploring party) was promptly seized and sealed by the French government shortly after its discovery. More people have visited the summit of Everest since 1994 than have seen the interior of the cave. Much of the struggle for Herzog and Nelson was about getting in there in the first place. What can be seen inside Chauvet goes well beyond the 400 or so Paleolithic cave paintings, which remain in nearly pristine condition, and a good deal of important artifacts and fossils (cave-bear skulls! cave-bear scratches!). At least arguably, Chauvet has far-reaching implications for the study of cultural prehistory and the birth of human consciousness. Some of these paintings may go back 33,000 years, which makes them almost twice as old as the art in the better-known Lascaux caves, and roughly 7,000 years older than any other known examples of pictorial art. They open an ambiguous window into an impossibly distant human past and bring us as close as we can come, for now, to the dawn of art.

If you had to nominate one filmmaker to explore this astonishing underground world for posterity, then the legendary cinematic madman and visionary who once ordered a passenger ship pulled over a mountain might well be your choice. Herzog has never been daunted by logistical challenges, and from his early career in Germany through documentaries like "Encounters at the End of the World" and "Grizzly Man," his work has been infused with what you might call an atheistic spirituality. He's always fascinated by the kinds of unanswerable questions about human nature and the human soul that Chauvet seems to pose.

Simply by getting into Chauvet and out again with these amazing pictures, Herzog has done quite enough. The overlaid quartet of horses! The pair of battling woolly rhinos! The running bison, flowing with the contours of the cave wall! The claustrophobia, the sense of almost understanding the artists' intentions, and the amazing moment when Herzog and his various interlocutors explain that a painted handprint left millennia ago links some of these pictures to a particular individual, a man who lived and died so long ago that we know almost nothing about his culture and society. All that is a gift to humanity, one that all on its own places this among Herzog's most important films. Watching "Cave of Forgotten Dreams" is an interactive experience, and not in the bogus computer-game sense. I guarantee you will exclaim out loud, ooh and ahh, feel shivers of recognition go down your spine.

I realize that Herzog's narration, the slow-cadenced working out of unanswerable philosophical questions in that remarkable Teutonic-via-Los Angeles accent, borders on shtick. But I almost always like it, and I wish that Herzog had probed deeper in his voiceover to "Cave of Forgotten Dreams" and wasn't so easily distracted by his fellow oddballs -- former circus performers, fur-clad scientists who can play the "Star-Spangled Banner" on a vulture bone, albino crocodiles at a nearby nature preserve. Other than the fact that Herzog has an almost manic fascination with reptiles, I don't get why the crocodiles are in here at all. (They're not "radioactive mutants," as some reviews have fancifully claimed.) It's a bit like watching a vacation video that ends with the 20 minutes when your dad left the camera on by accident and captured an entire visit to the gator ranch on the way home from Disney World.

Scientists are supposed to avoid guesswork and supposition, but filmmakers are under no such restriction. To me Herzog's claim that the world of Chauvet is lost to us and not even guessable simply isn't true. (In other words, I think his title is wrong.) OK, we'll never know what language they spoke in 31,000 B.C., or hear the stories they told around the fire. But what makes Chauvet so striking, I think, is that on a species-instinct level, we recognize what kind of place this is right away. It's the place where those stories got shaped and told, the place where one generation passed along its symbolic understanding of the universe to the next. My first thought was: It's a temple, a church, a cathedral -- maybe the first one ever built -- and the better-known ones in Rome and Jerusalem and Istanbul are just later versions of the same thing. You might prefer to call it a theater or an art gallery or a dance hall instead; I suspect it comes to the same thing in the end.

"Cave of Forgotten Dreams" is now playing in Chicago, Los Angeles and New York, with wider national release to follow.