Three of Gadhafi's grandsons also killed in airstrike, according to Libyan government 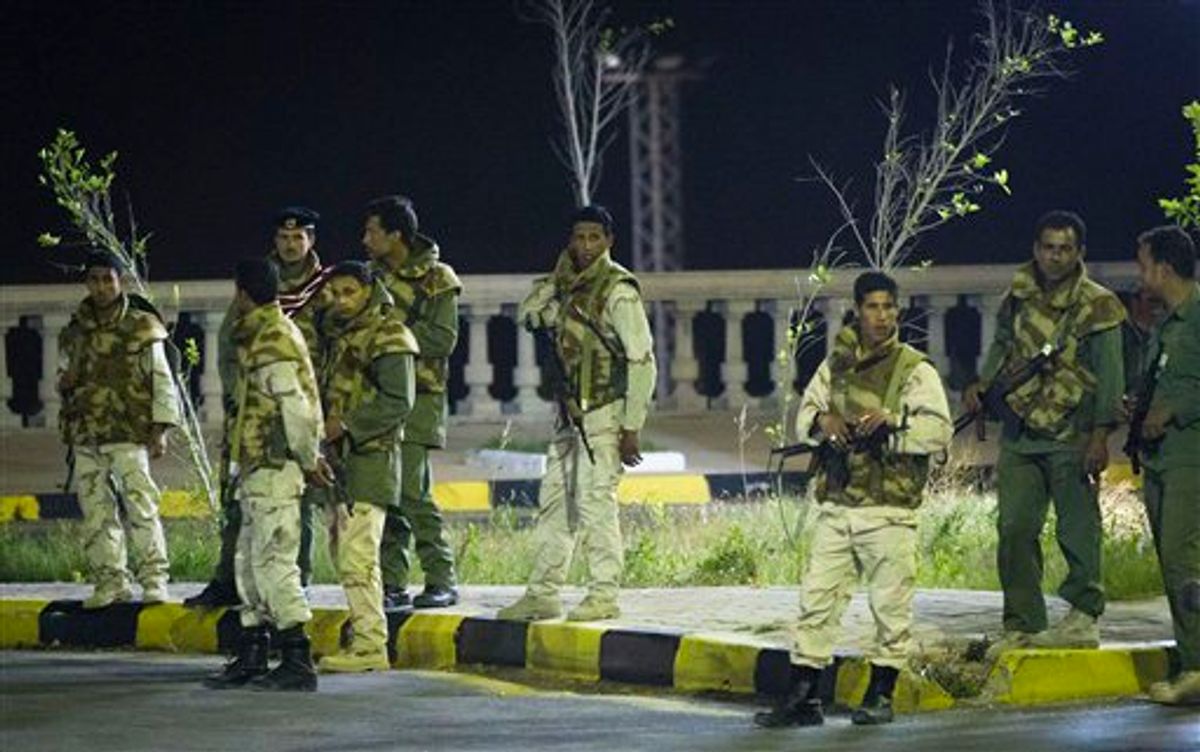 A NATO missile struck a house in Tripoli where Moammar Gadhafi and his wife were staying on Saturday, missing the Libyan leader but killing his youngest son and three grandchildren, a government spokesman said.

Seif al-Arab Gadhafi was the sixth son of Gadhafi and brother of the better known Seif al-Islam Gadhafi. The younger Gadhafi had spent much of his time in Germany in recent years.

Moammar Gadhafi and his wife were in the Tripoli house of his 29-year-old son, Seif al-Arab Gadhafi, when it was hit by at least one bomb dropped from a NATO warplane, according to Libyan spokesman Moussa Ibrahim.

On Tuesday, British Defense Minister Liam Fox and U.S. Defense Secretary Robert Gates told reporters at the Pentagon that that NATO planes were not targeting Gadhafi specifically but would continue to attack his command centers.

Ibrahim said Seif al-Arab had studied at a German university but had not yet completed his studies.

"The attack resulted in the martyrdom of brother Seif al-Arab Gadhafi, 29, and three of the leader's grandchildren," Ibrahim said.

Seif al-Arab "was playing and talking with his father and mother and his nieces and nephews and other visitors when he was attacked for no crimes committed," Ibrahim said.

Journalists taken to the walled complex of one-story buildings in a residential Tripoli neighborhood saw heavy bomb damage. The blast had torn down the ceiling of one building and left a huge pile of rubble and twisted metal on the ground.

Ibrahim said the airstrike was an attempt to "assassinate the leader of this country," which he said violated international law.

Heavy bursts of gunfire were heard in Tripoli after the attack.

Gadhafi had seven sons and one daughter. Seif al-Arab was the youngest son.

The Libyan leader also had an adopted daughter who was killed in a 1986 U.S. airstrike on his Bab al-Aziziya residential compound, which was separate from the area struck on Saturday. That strike came in retaliation for the bombing attack on a German disco in which two U.S. servicemen were killed. The U.S. at the time blamed Libya for the disco blast.

The fatal airstrike came just hours after Gadhafi called for a mutual cease-fire and negotiations with NATO powers to end a six-week bombing campaign.

In a rambling pre-dawn speech Saturday, Gadhafi said "the door to peace is open."

"You are the aggressors. We will negotiate with you. Come, France, Italy, U.K., America, come to negotiate with us. Why are you attacking us?" he asked.

He also railed against foreign intervention, saying Libyans have the right to choose their own political system, but not under the threat of NATO bombings.

In Brussels, a NATO official said before Saturday's fatal strike that the alliance needed "to see not words but actions," and vowed the alliance would keep up the pressure until the U.N. Security Council mandate on Libya is fulfilled. NATO has promised to continue operations until all attacks and threats against civilians have ceased, all of Gadhafi's forces have returned to bases and full humanitarian access is granted.

The NATO official, who spoke on condition of anonymity according to policy, noted that Gadhafi's forces had shelled Misrata and tried to mine the city's port just hours before his speech.

"The regime has announced cease-fires several times before and continued attacking cities and civilians," the official said.

Rebel leaders have said they will only lay down their arms and begin talks after Gadhafi and his sons step aside. Gadhafi has repeatedly refused to resign.

"We don't believe that there is a solution that includes him or any member of his family. So it is well past any discussions. The only solution is for him to depart," he said.