Kate's younger sister becomes the most eligible bachelorette in Britain, whether she likes it or not 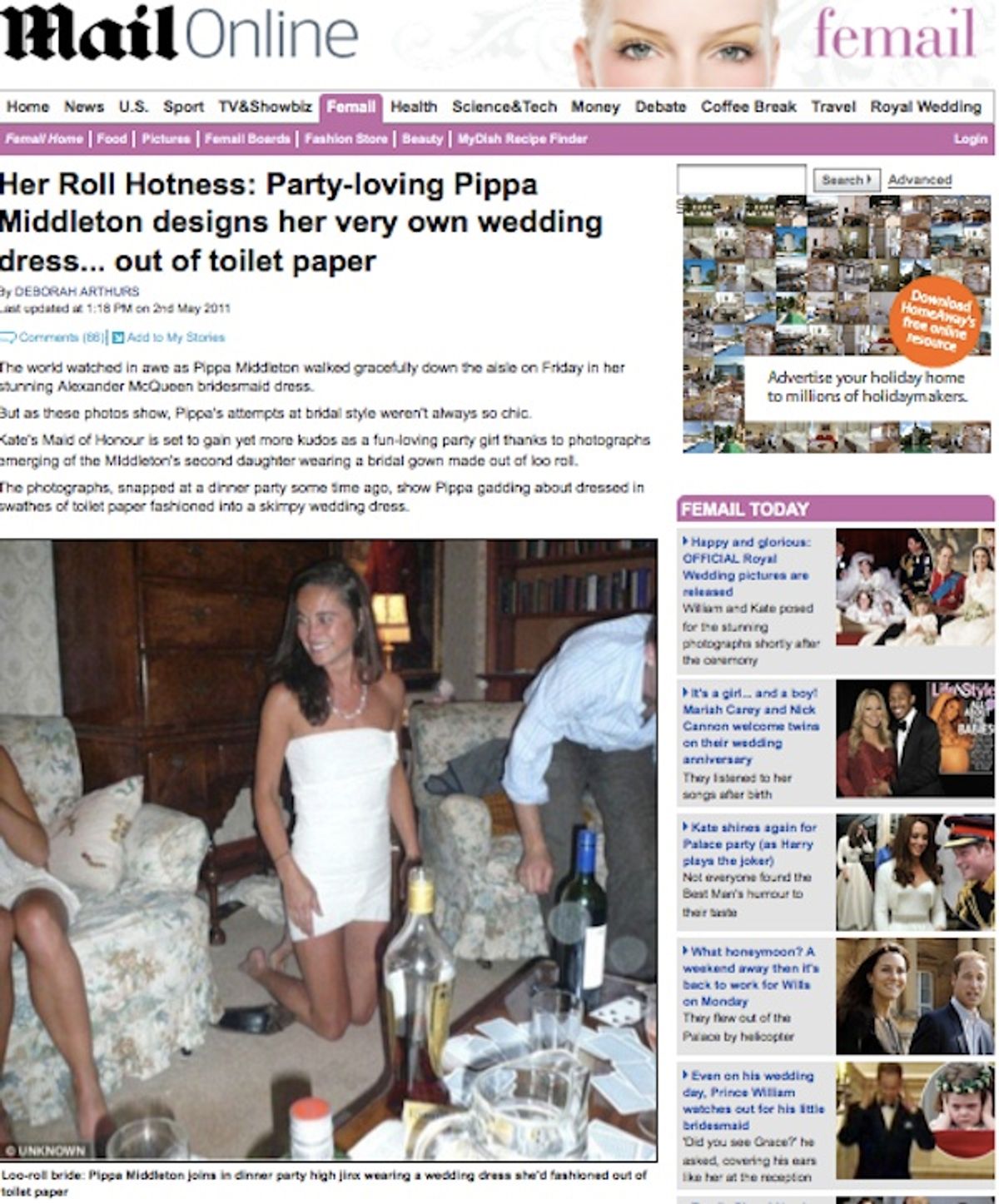 Is the public demanding more photos of Pippa in toilet paper?
--

Why can't the media let the royal wedding go? Long after Twitter and Facebook fans have quieted their yammering about Prince William and Kate Middleton, the news cycle is still trying to get its money's worth. Unfortunately, Kate and William will be kind of hard to get ahold of since the ceremony, since they're planning to be holed up in a $4k-a-night villa. (And if you're wondering if I'm ashamed to know the exact amount of their honeymoon suite, the answer is yes.)

Maybe it's because Americans were generally unaware of Pippa -- or the rest of the Middleton family -- before being introduced to her early Friday morning. Or perhaps it's because of all the Twitter speculation that she would hook up with Prince Harry and make the new royals a family of Middletons. But most likely it's because Pippa, unlike her sister Kate, hasn't spent half a lifetime in the public eye, and therefore has some embarrassing Facebook photos we can dig up. One of today's hottest stories features photos of the 27-year-old wearing a dress made out of toilet paper and climbing on top of a human pyramid of cute boys.

And, like anything celebrity-related, the media is blaming all the attention on Pippa herself, specifically for wearing such an incredible dress at her sister's wedding.  According to one of today's Daily Mail articles about Pippa (yes, there is more than one article, just from this morning):

Kate’s glorious bridal gown rightly grabbed all the headlines. But smoking hot on her heels was lil’ sis, poured into a column of buttermilk satin, in a button-backed dress that was tighter than a coat of paint.

True, its unforgiving structure meant Pippa had to mince up and down the Abbey aisle like a geisha with corns, but it was worth it.

After all, her role as maid of honour was a secondary one. Hold the bouquet, keep smiling, don’t let the bride get spinach on her teeth.

Most importantly, she had to attend to a majestic bridal train that was almost nine feet long. A duty that required a lot of bending over.

So if you have to do this in front of a global audience of billions, you might as well bunny dip in an unforgettable frock that is going to maximise your best asset.

See, if only Pippa hadn't been dressed so salaciously, we'd be able to leave her alone! It's her fault that she looked so beautiful in her dress that the paparazzi will now be following her around relentlessly. Well, the dress, and the fact that we need to continue this British royal coverage somehow … think about all the money we just sank into it!