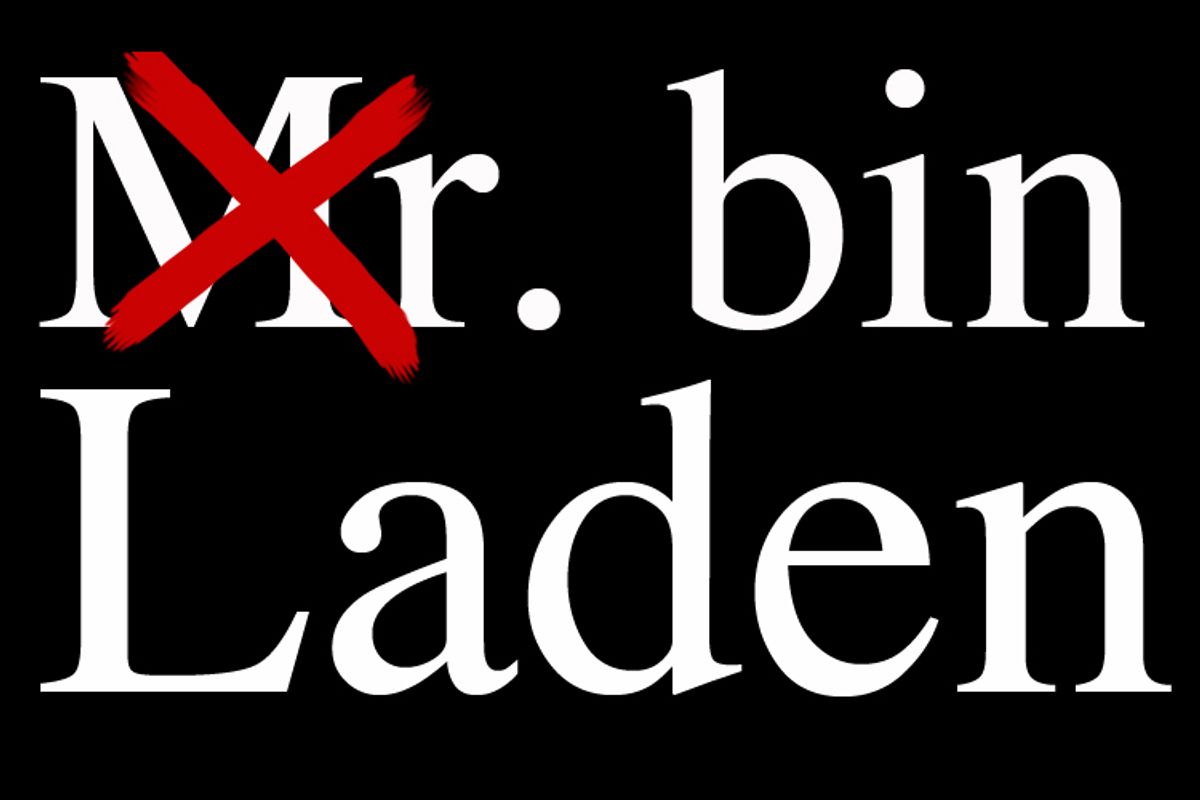 The death of Osama bin Laden on Sunday marked the end of an era -- and not just in the war on terror. It was also cause for a big change at the Gray Lady: The New York Times is no longer referring to the late al-Qaida leader as Mr. bin Laden. There's no formal address in hell.

As Jim Romenesko noted Monday, Times staffers received an email directive shortly after the president's press Sunday night address that "At [Managing Editor] Jill [Abramson] and [Executive Editor] Bill [Keller's] request, we dropped the honorific for Bin Laden. Without a 'Mr.' in front of his name, it was decided that we should capitalize the 'B' in Bin Laden on second references."

It's a highly unusual move for the paper, one of the last bastions of editorial properness in an increasingly familiar world. Earlier this year, even the Wall Street Journal dropped "Mr." and "Ms." from its sports coverage, though titles still reign elsewhere in its pages.

Is the abrupt change simply a standard procedure relating to bin Laden's change in status? On Twitter, Ben Smith mused,  "don't you lose the honorific when you die anyway? At the old nysun, it was death or felony conviction, as I recall." But on Sunday evening, the Times was still freely referring to him as "Mr. Bin Laden." And when the Times writes new stories about other dead public figures, such as Sidney Lumet or Michael Jackson, the "Mr." remains even after the man has gone.

Judging from its back issues, it's considerably easier to get into the Who's Who of Evil than it is to get your Mr. dropped by the Times. Sure, Stalin is Stalin -- just Stalin -- and Mussolini is Mussolini. But Jeffrey Dahmer was always Mr. Dahmer. Charles Manson is still Mr. Manson. Robert Mugabe is Mr. Mugabe. And Muammar el-Qaddafi, is, of course, Colonel Qaddafi.  Though the Times dropped the "Mr." from its references to Khmer Rouge leader Pol Pot and Romanian dictator Nicolae Ceausescu after they died, they were always Mr. Pol Pot and Mr. Ceausescu in life. And while Adolf Hitler is generally referred to simply as "Hitler,"  even he has been known to get a winking "Mr. Hitler."

There are occasional exceptions to the rule, but they're based not on the infamy of the subject but the discretion of the writer. Book reviews generally get a free pass.  The public editor, similarly, can write "in my own voice, not subject to the newspaper’s rules of style" -- which means Arthur Brisbane can call Arthur Sulzberger Jr. just Sulzberger if he feels like it. He uses "Mr." and "Mrs." consistently anyway.

Does it matter much whether, in its future reporting, the Times refers to the recently deceased as plain old "Bin Laden"? Only in that, by dropping the "Mr.," the paper's famously restrained editors have perhaps revealed a deep degree of feeling toward this man who wounded us so deeply, so close to home. It took American forces almost 10 years to find and kill bin Laden. But it took the New York Times just a few hours to take from him the only thing it could. In his death, there is no honor. And now, at the Times, there's no honorific either.