Is it too soon to laugh about Osama?

The terrorist may have just been killed, but he's already a punch line 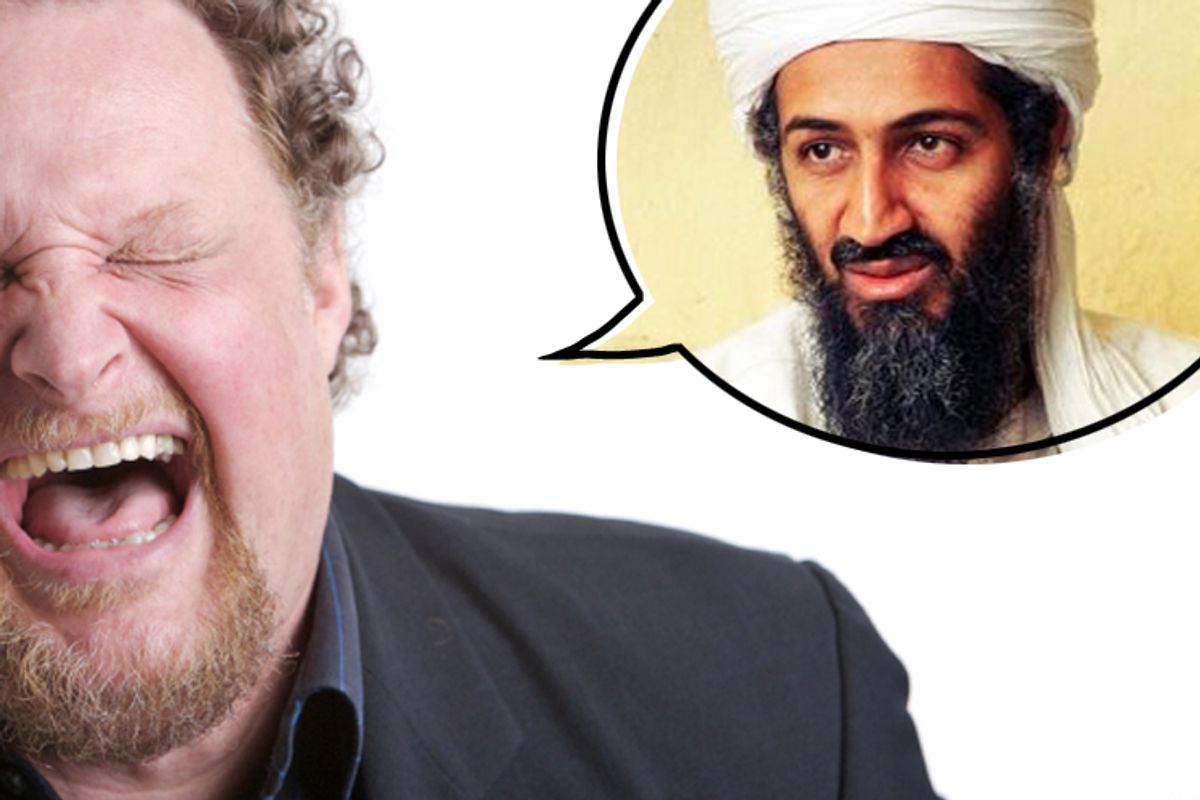 Nearly a decade after 9/11, it is still, in many venues, too soon to crack jokes about the terrorist attacks. And in the days after the Japanese earthquake and tsunamis of March, Gilbert Gottfried learned that maybe forever isn't too long to wait for one-liners. But the rules of decorum don't apply to terrorist masterminds. And the man whose death brought about jubilant celebration in the streets Sunday night is already a punch line. Osama bin Laden, your legacy as not just a murderous jihadist but a comic inspiration is already assured.

If the fact that fictional "24" hero Jack Bauer was trending on Twitter early Monday morning isn't an indication of America's collective willingness to find the lighter side of 10 years and three wars' worth of grief and futility, the deluge of one-liners has sealed the deal. As comedian Ted Alexandro promptly tweeted, "The Kabul Komedy Zone open mic will be the place to be tomorrow night!" Twitter newbie @GhostOsama, who reports that "Hitler is pretty chill," already has nearly 35,000 followers.

And so it has begun, a collective wave of joshing around and one-upsmanship, mostly riffing on the theme of Obama owning it. "You know Barack and Michelle are having some crazy 'we killed Bin Laden' sex right now," tweeted comic Christine Nangle, while Chris Hardwick mused, "'Just wait...juuuuuuuust wait till tomorrow you ass-clowns...' -Barack Obama, to himself at White House Correspondents' Dinner." Paul Scheer, meanwhile, announced that "I've heard that until Charlie Sheen tweets 'winning!' Osama's death doesn't count. Which, naturally, Charlie Sheen did.

Much of the post-Osama humor, unsurprisingly, has centered on the death as an ultimate "Up yours" to a certain New York real estate developer/rich white idiot. Neal Brennan praised the president with' "So great to see Barack Obama defeat the man who brought so much pain to the city of New York: Donald Trump." Doug Benson offered the inevitable, "Looking forward to Donald Trump's next press conference, when he'll demand to see Osama bin Laden's death certificate." John Fugelsang noted, "Man, Trump's gonna have to fire the entire cast of Apprentice to top this. And Jimmy Fallon cheered, "Got Bin Laden AND interrupted Celebrity Apprentice? Win for Obama all around."

While the jingoistic hooting in the streets may seem deeply unnerving to many -- including those of us directly affected by the terror attacks --  the impulse to share a cathartic laugh after 10 long years seems eminently healing. The economy is still in the tank, our reproductive rights are in jeopardy, right-wing extremists have hijacked both the American political process and a shocking portion of the media, our troops are still not home, and the threat of terror remains real. No wonder that somewhere in the midst of the New York MTA's "high alert" Monday morning, we need something to smile about. Not in a fist-pumping, "USA! USA!" way, but a relieved, "Christ, what a circus" one. We need to laugh at the idea that that the reason Obama didn't jump when Trump demanded his papers is because the president is such a badass. And conspiracy theorists might notice that the Sunday night timing of the whole thing will conveniently give the late shows plenty of time to pull together plenty of gags in time for Monday night. We still haven't won the war on terror. But the death of bin Laden at least proves we know one of its most effective weapons -- a devastating zinger.