The role Mel Gibson was born to play

The actor's performance in "The Beaver" is peculiar, disturbing -- and utterly brilliant 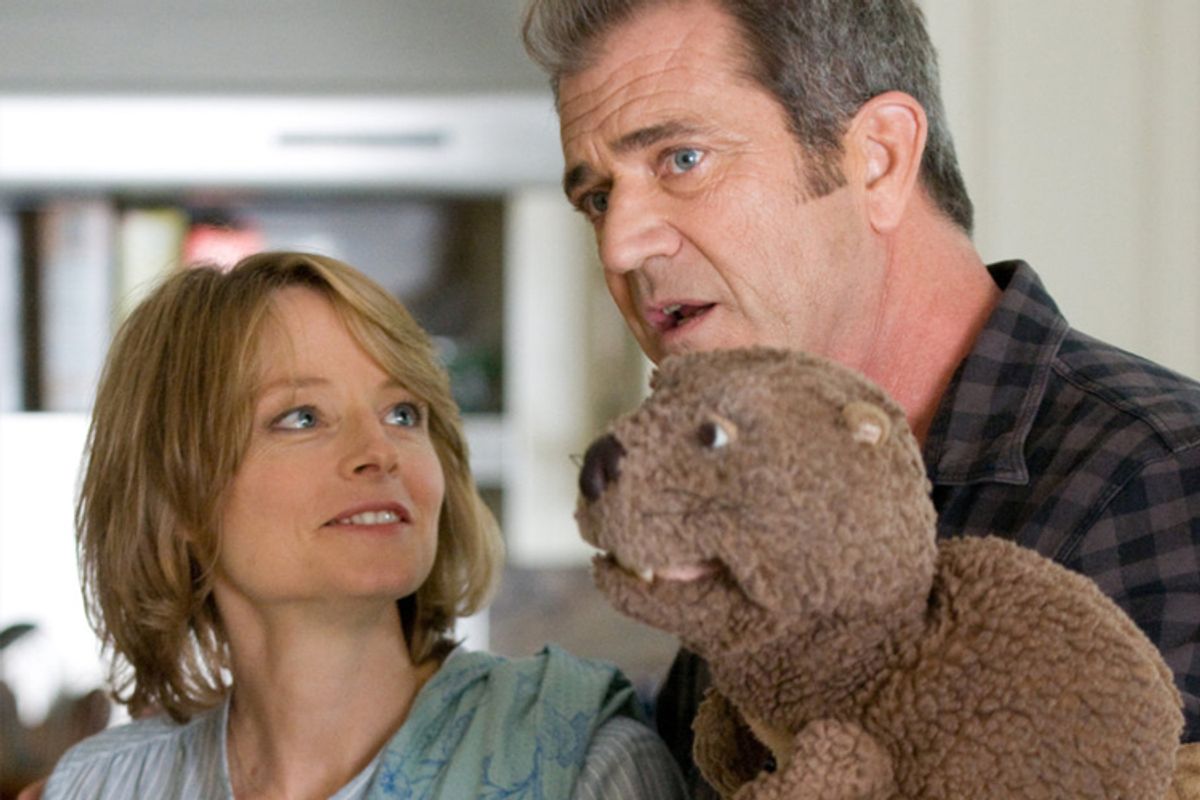 Jodie Foster and Mel Gibson in "The Beaver"
--

Even before Mel Gibson's most recent set of personal and legal difficulties -- i.e., the "revelation" that he sometimes behaves like an unbelievable prick, and may be dangerously unstable -- "The Beaver" was always going to be a weird footnote to his career. But both within the universe of Hollywood and the universe of the film, there was a logic to it: Take an immensely gifted actor, once a dominant star but now viewed as a bigot and a wacko, and unleash him on a dark, ambitious script about a character suffering a schizophrenic breakdown. Add the fact that Gibson's director and co-star is perhaps the most respected woman in the film industry and roll the dice; if producer Steve Golin was imagining a possible upside of "Being John Malkovich" or "Eternal Sunshine of the Spotless Mind" here, it's no wonder, since he helped make those movies too.

In the wake of Gibson's unfortunate phone calls to his ex-girlfriend and the ensuing blizzard of bad publicity, "The Beaver" became more of a sideshow than a footnote. I can understand why its bizarre combination of ingredients sounded to many people like a career-killing disaster: Gibson and Jodie Foster? They're not just colleagues but good friends? And they play a couple? And there's a mangy, demonic beaver puppet with a Michael Caine East End accent and a faint resemblance to Godzilla? That's all accurate, and it's pretty hard -- no, it's impossible -- not to watch "The Beaver" through the lens of what we know or believe about its actors and their off-screen lives.

I suppose the perfect ending to the chapter would be to report that "The Beaver" is a masterpiece. It isn't quite, but it does offer an astonishing and resonant performance by Gibson, who spends most of the movie playing two simultaneous characters, often in the same shot. On one hand, he's the profoundly depressed toy executive Walter Black, and on the other hand (ha, ha!) he's the cheerful, scabrous alternate personality that Walter has poured into a puppet he dug out of a Dumpster behind a liquor store. Walter isn't a ventriloquist and there's no suggestion of supernatural agency here, so Gibson frequently has to voice the Beaver's lines at the same moment as he's reacting, with his face and body, as the terrified and uncertain Walter. I don't know whether Gibson is Method-acting out of his own psychology or is just a brilliant mimic, but it's tough to resist the conclusion that this guy knows what it's like to look in the mirror and not quite recognize the person he sees there.

Kyle Killen's screenplay for "The Beaver" floated around Hollywood for several years as one of those legendary, perhaps unfilmable projects; it resonates with literary ambition and film-school influences, which isn't quite the same thing as saying it all works. (I should note that in 2004 Killen wrote a hilarious and highly popular article for Salon about his career in tech support.) There's a bit of Charlie Kaufman-style high concept here, filtered through arguably a bit too much of Alan Ball's script for "American Beauty." If the latter movie is narrated by a dead man and this one is narrated by, well, a beaver with a put-on London accent, Walter nonetheless undergoes a symbolic death and rebirth, with the aid of a shower-curtain bar, a television set and an episode of "Kung Fu."

From the uncanny moment when the Beaver wakes Walter from an alcoholic stupor in his trashed motel room, all is changed, changed utterly: He comes home to his bewildered wife, Meredith (that's Foster, giving a tense, restrained performance), and their two kids, demonstrates newfound skills at fatherhood, and brings his company back from bankruptcy with a line of Beaver-inspired woodworking toys. Killen is both invoking and parodying the American mania for sudden transformation -- meetings with Jesus, being touched by an angel, surrendering to a greater power, etc. -- and echoing all those Frank Capra-style movies about someone who is granted magical favors and then must deal with the consequences. (With a bigger budget and more slapstick, this could and arguably should have been a Jim Carrey movie.)

Walter tells Meredith that the Beaver was his shrink's idea, which isn't true, and doesn't make her feel that much better about the puppet being in bed with them (the funniest of the film's black-comic sequences). Yes, even the most sympathetic viewer may have trouble staying in this movie's diegetic universe the whole time; "The Beaver" offers passionate scenes of simulated sex between a presumed misogynist asshole, a presumed not-quite-closeted lesbian and a semi-menacing beaver puppet, and it's not possible to tell whether you're laughing for the right reasons.

Foster responds to the outrageous premise of "The Beaver" by dialing back the direction and delivering the story in unassuming, largely realistic fashion. She clears a calm, quiet space around Gibson, allowing him to deliver a brilliantly contradictory performance. He's always been an actor of tremendous charisma and almost manic energy, and he deploys that here to play a paunchy, battered, leathery-looking man so exhausted with himself that he outsources his own life force. At least in theory Foster's approach sounds like the right idea, but whether she was overly concerned with protecting her friend or with playing a difficult supporting role, she never seems to develop a clear idea of what the movie's about or why it exists. There's an ancillary plot about Walter and Meredith's damaged teenage son (Anton Yelchin) and his budding romance with the school valedictorian (Jennifer Lawrence), which is likable enough but doesn't seem to be happening on the same planet.

Maybe the most compelling scene in "The Beaver" is also its most artificial, when Walter-via-Beaver delivers a moving monologue to "Today" show host Matt Lauer about how sometimes it's necessary to throw away your past and start over. He joshes with Jon Stewart, poses for the covers of Wired and Fortune. But the Beaver is not entirely a benevolent force, and has no intention of surrendering control of Walter's personality. (There's more than a dash of "Magic," the late-'70s Anthony Hopkins ventriloquist-horror flick, in this movie's DNA.) Walter's final solution to this problem is both shocking and ludicrous, but it only heightens the sense that Foster and Gibson -- mismatched friends with quasi-public secrets -- have made a psychodrama that's partly therapy and partly self-criticism. Was it Mel who made those terrible phone calls, or was it the puppet?

"The Beaver" opens May 6 in New York and Los Angeles, with wider release to follow.