How to age gracefully in the age of Web snark 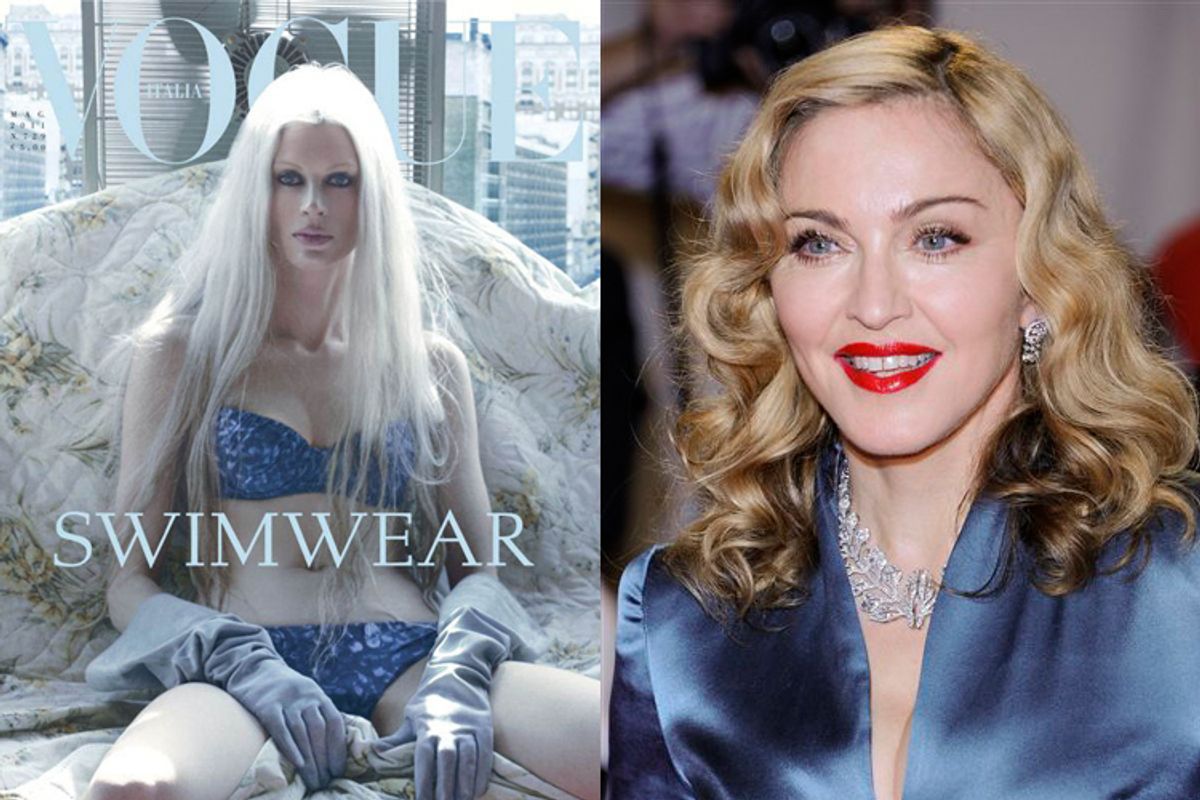 The beautiful woman staring out from the cover of Italian Vogue has a long, lithe form, a teeny weeny bikini and a cascade of casually undone hair. But she's not your typical pretty face. She's Kristen McMenamy. And she's 46 years old.

Inside, in a spread shot at the Chelsea Hotel shot by Steven Meisel, she lounges on rumpled sheets, shows off her chiseled abs, and appears to have the gravity defying form of modeling peers three decades her junior. But what makes the spread so striking isn't that she looks so young – although if she's got a line on her face it's been aggressively Photoshopped out. Quite the opposite. Those long beautiful tresses? Dazzlingly white. She doesn't look like an aging model trying to look like a kid. She looks like a crazy hot version of the White Witch.

McMenamy has for some time now has been studiously rocking the long gray hair look -- and booking plenty of gigs in the process. In the past year alone, she starred on Lagerfeld's and Calvin Klein's catwalks  and appeared on the August cover of Italian Vogue. "I finally let my hair go gray and told myself I’d never model again," she said after the Lagerfeld show in January. "Being here to model with all these 18-year olds is so poignant. I mean, Karl chose me to be his bride and I’m 47 years old. I guess that means it’s never too late. [She is actually 46]"

"It's never too late" is a lovely idea, one that certainly gets a big assist if you happen to belong to the tiny pool of human beings in the world who can write "supermodel" under "occupation" on your medical forms. But the tough reality of aging isn't always so sunny side. To be a famous, beautiful woman is a rare privilege. But to grow older in front of the world when your looks have been your career can't be anybody's idea of a picnic. The world is a cruel place for the woman who dares to age. And the Internet is even crueler, as the constant OMGing over who's getting fat and who looks haggard will attest. As Carrie Fisher has said, "I swear when I was shooting those ["Star Wars"] films I never realized I was signing an invisible contract to stay looking the exact same way for the rest of my existence." Or as Demi Moore once tweeted, after a brutal round of Twitter bashing, "I'm 47 -- how am I supposed to look?"

And even the most confident woman in the world can find herself one day looking in the mirror and thinking, "Oh crap." And by "most confident woman in the world," I mean, Madonna. At the Met Costume Institute Gala earlier this week, the 52-year-old, looking enviably glam in a blue Stella McCartney dress, admitted that she felt "a little bit fat" in her skintight getup. She went on to reminisce about Alexander McQueen, noting, "We did have a French fry fight one night," making it possibly the only time in her life that Madonna's hands have touched fries.

The singer, who parted ways with her trainer Tracy Anderson last year and opened a "Hard Candy" gym in Mexico, has rarely displayed such a candid confession of body dissatisfaction. Yet that sinking feeling, that "I look fat," or "I look old" or just plain "Uggggh" – is something almost every woman who's ever put on a party dress and dolled herself has expressed. It'd be nice if Madonna had added an inspirational "but I'm still crushing it anyway" addendum to her self-deprecating admission, but it's liberating to hear that a superstar grapples with corporeal indignities just like mere mortals.

Kristen McMenamy, Madonna, and a host of other well compensated, genetically fortunate women may have an easier time creaking into their golden years than most. But they're still doing it, and with a flair that defies the conventional – and often scary looking – trend for a frozen-faced aping of youth. Fifty doesn't have to be the new 30, because 50 ain't what it used to be anyway. It can have gray hair and fat days and be beautiful. Or, as McMenamy told the Daily Mail last year, "You can get older and still be rock 'n' roll."