First incursion since devastating earthquake a month-and-a-half ago 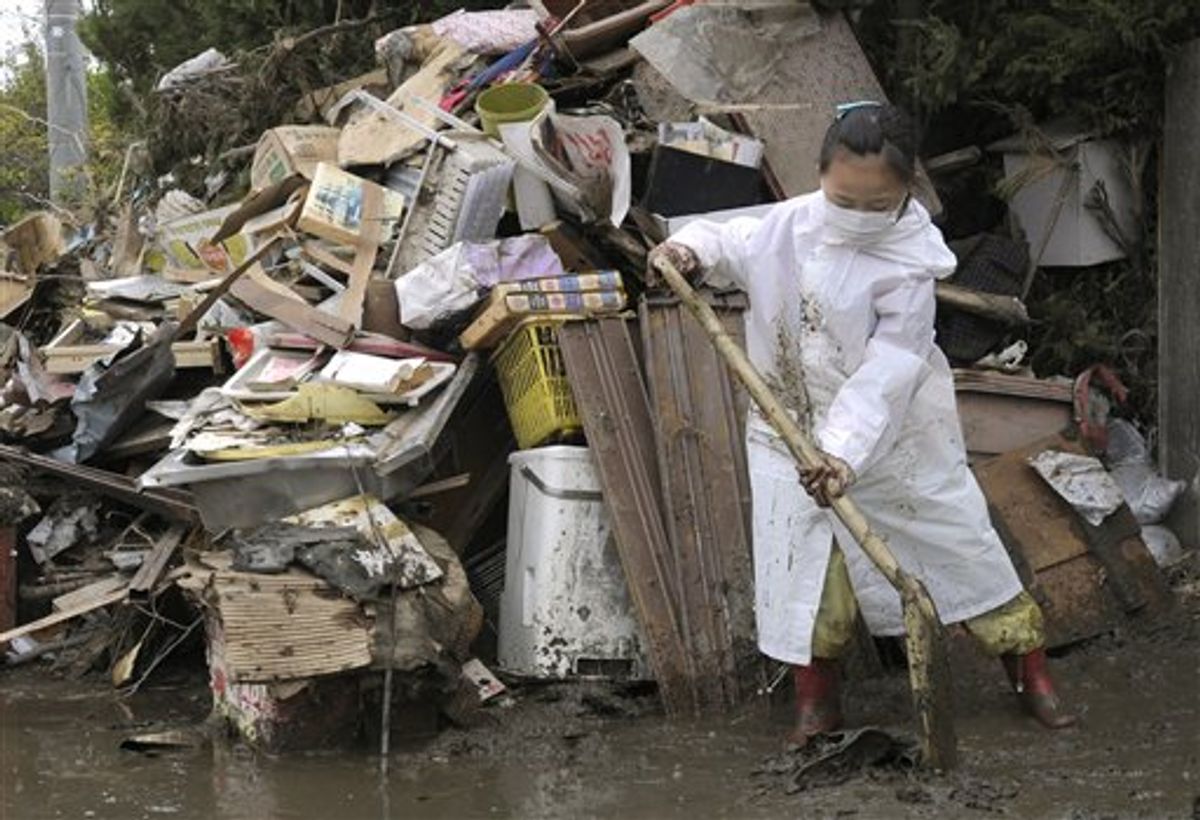 A volunteer girl from Tokyo works to clean the debris of a house in Higashimatsushima, northern Japan Saturday, April 30, 2011. She is a member of a Tokyo's volunteer group which helps earthquake and tsunami devastated areas on weekend. (AP Photo/Kyodo News) JAPAN OUT, MANDATORY CREDIT, NO LICENSING IN CHINA, HONG KONG, JAPAN, SOUTH KOREA AND FRANCE (AP)
--

Workers entered one of the damaged reactor buildings at Japan's stricken nuclear power plant Thursday for the first time since it was rocked by an explosion in the days after a devastating earthquake, the plant's operator said.

Tokyo Electric Power Co. said workers connected ventilation and air filtration equipment in Unit 1 in an attempt to reduce radiation levels in the air inside the building.

The utility must lower radiation levels before it can proceed with the key step of replacing the cooling system that was knocked out by the March 11 quake and subsequent tsunami that left more than 25,000 people dead or missing along Japan's northeastern coast.

Workers have not been able to enter the reactor buildings at the Fukushima Dai-ichi nuclear power plant, about 140 miles (230 kilometers) northeast of Tokyo, since the first days after the tsunami. Hydrogen explosions at four of the buildings at the six-reactor complex in the first few days destroyed some of their roofs and walls and scattered radioactive debris.

TEPCO spokesman Junichi Matsumoto called Thursday's development "a first step toward a cool and stable shutdown," which the utility hopes to achieve in six to nine months.

In mid-April, a robot recorded radioactivity of about 50 millisieverts per hour inside Unit 1's reactor building -- a level too high for workers to realistically enter. Readings taken later in April in another part of the building were as high as 1,200 millisieverts.

The decision to send the workers in was made after robots last Friday collected fresh data that showed radiation levels in some areas inside the building were safe enough for workers to enter, said Taisuke Tomikawa, another TEPCO spokesman.

Two utility workers, wearing a mask and air tank similar to those used by scuba divers, entered the reactor building for about 25 minutes to check radiation levels. They were exposed to 2 millisieverts during that time, Tomikawa said. Outside the building, the utility erected a temporary tent designed to prevent radioactive air from escaping.

Later, 11 other workers -- two from TEPCO and nine from its subcontractors -- wearing similar gear went into the reactor building to install ducts for the air filtering equipment. Twenty other workers provided help from outside.

The utility hopes to start allowing workers into the building to set up a cooling system around mid-May. In addition to reducing radioactivity with the new air filtering system, it hopes to reduce it further by removing or covering up contaminated debris inside the building, Matsumoto said.

TEPCO is proceeding with a plan to fill the Unit 1 containment vessel with water to soak the core and cool it, and also plans to install big fans as an external cooling system, he said. TEPCO hopes to take similar steps at Units 2 and 3 but is struggling with tougher obstacles such as contaminated water leaks and debris.

Radiation leaking from the Fukushima plant has forced 80,000 people living within a 12-mile (20-kilometer) radius to leave their homes. Many are staying in gymnasiums and community centers.