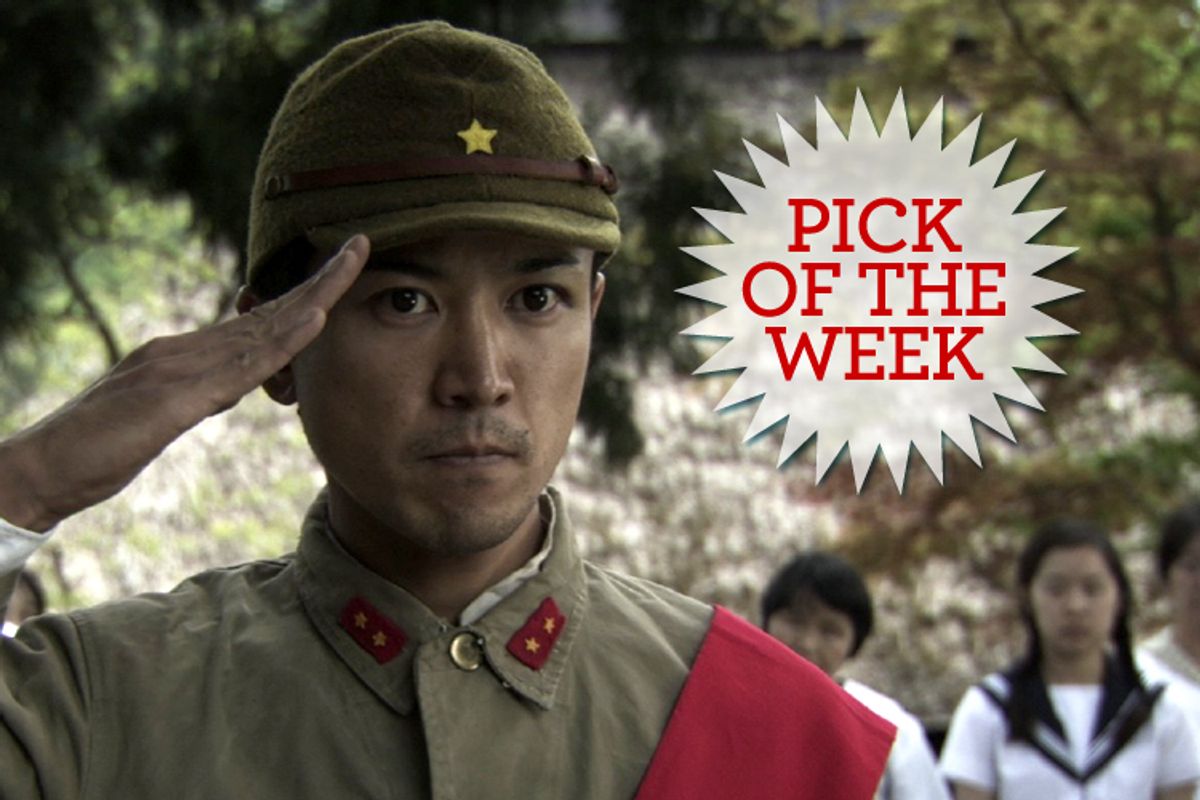 A still from "Caterpillar"
--

I have no illusions about the commercial prospects of Japanese director Koji Wakamatsu's "Caterpillar," a wrenching, low-budget drama about a soldier who comes home from World War II brutally maimed, with no arms or legs. As a foreign-language movie with no stars, modest production values and exceptionally tough subject matter, it has none. A few cinephiles will eventually seek it out on home video; if it plays in any theaters beyond New York and Los Angeles, that'll probably come as a surprise to its distributor (the estimable Lorber Films). None of that diminishes the power and intensity of this claustrophobic mini-masterpiece of the Japanese antiwar tradition, which blends a B-movie aesthetic, brilliant use of montage and documentary elements and a scathing critique of nationalism and militarism.

Even in the endlessly variegated world of Japanese cinema, Wakamatsu is a peculiar case. Best known as a director of "pink" films -- i.e., softcore erotic comedies and dramas -- from the 1960s through the '90s, he's also had an alternate career as both a critic and an exponent of radical politics. That culminated with his 2008 magnum opus "United Red Army" (which will finally be released in the United States later this year), a fiction-documentary hybrid exploring the notoriously crazy '70s history of the Japanese far left. Loosely inspired by a short story by Japanese genre writer Edogawa Rampo -- yes, that is a pseudonym meant to resemble the name of a famous American writer -- "Caterpillar" is in some sense both a response and a prequel to that earlier film. Most obviously, it's an attack on the right-wing "war cult" of Imperial Japan that helped launch the most destructive conflict in human history, and Wakamatsu has explained that you must understand the insanity of the fascistic '40s in order to grasp the insanity of the radical '70s.

Like many other young men all over Japan, provincial farmer Kyuzo Kurokawa (Shima Onishi) goes off to fight, circa 1940, in the Japanese invasion of China. Villagers gather around to salute him with shouts of "Banzai!" and he swears to die as needed for his country and its emperor. But this dashing young lieutenant doesn't die. Instead he comes home mutilated and deaf, with imperial medals pinned to his limbless torso and a glowing newspaper article that describes him as a "War God," a model of bravery and loyalty to other soldiers. At first his young wife, Shigeko (Shinobu Terajima, whose remarkable performance won an acting prize at the Berlin Film Festival), is devastated and horrified, but she soon learns that social prestige, along with certain material advantages, accrue from being the War God's nurturing wife. (In case you're wondering: Wakamatsu says he's seen the movie of Dalton Trumbo's "Johnny Got His Gun," but despite a similar premise the two films aren't much alike.)

From the beginning of the film, Wakamatsu inserts bits of newsreel footage, radio propaganda broadcasts and gruesome, fragmentary scenes of violence. He's reminding his Japanese viewers that the conquest of China was a bloody affair, full of terrible atrocities against the civilian population (most infamously the Nanjing massacre of 1937), and reminding all of us that war in general is fueled by cruelty and lies. Some of his effects are so low-rent they resemble a mid-'80s made-for-television movie -- a scrim of digital flames in front of reprocessed black-and-white video footage -- but Wakamatsu has decades of experience with this stuff, and understands that you don't have to spend money to have an impact. His point is that the community decision to honor Kurokawa as a war hero is a cruel but convenient delusion, when he could be better understood either as a senseless casualty or a war criminal, and very likely both.

Just as the maimed officer is no symbol of noble Japanese sacrifice, neither is Shigeko the long-suffering and subservient lotus blossom she appears to be on the surface. At first she accedes to her husband's desire to eat, relieve himself and copulate in quick rotation -- his only remaining pleasures -- but the power dynamic between them has fatefully shifted, and the man who was once stern and tyrannical in the classic Japanese manner is now a crawling "caterpillar," utterly at her mercy. Arguably, this is almost another of Wakamatsu's "pink" films, albeit with some of the most disturbing sex scenes you'll ever see. "Caterpillar" is a challenging viewing experience, and defiantly not for everyone. But it exemplifies Philip Roth's dictum that an artist's principal task is to attack whatever is held sacred in his own society, and as an exploration of the shadowy boundaries between eroticism and violence, between individual insanity and collective madness, it belongs on the shelf alongside Nagisa Oshima's "In the Realm of the Senses" (which Wakamatsu produced), Liliana Cavani's "The Night Porter" and Agustí Villaronga's "In a Glass Cage."

"Caterpillar" is now playing at the IFC Center in New York, with other venues and DVD release to follow.