When Justin Bieber punched a cake on the "CSI" set

What could have made the teen sensation act out during his TV debut? We imagine what really happened 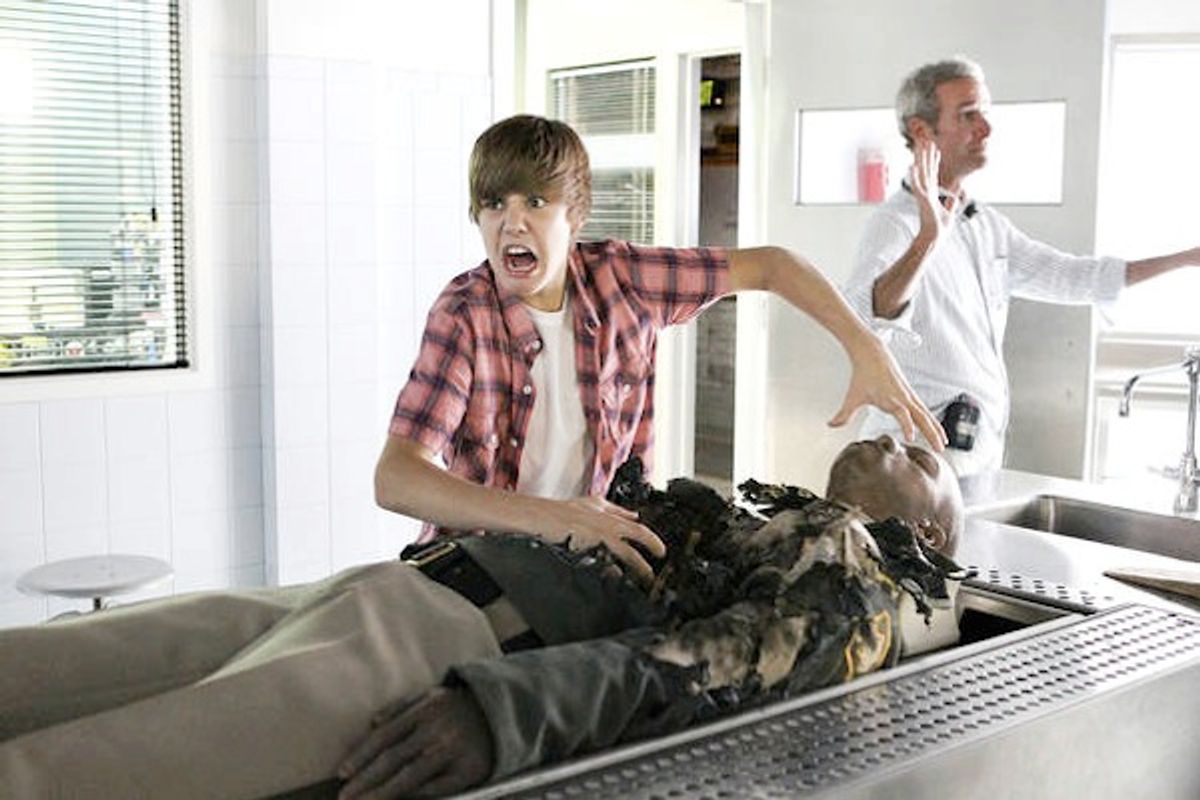 In news that should surprise absolutely no one, Justin Bieber is not the greatest human being ever. "CSI's" Marg Helgenberger, who co-starred with Justin when he made his now infamous cameos on the CBS show, offered this insight on the multi-platinum bundle of joy: "I probably shouldn't say this, but he was kind of a brat," she said in an interview with the French radio show "Le Grand."

But wait, that's not fair, Marg. Do you have examples to back up your claim? She does.

"He locked one of the producers in a closet," she added. "And he put his fist through a cake that was on the craft services table."

Yes, that's right. Justin Bieber punched a craft services cake. It's fun to try to imagine the scene that preceded that incident, so that's exactly what I did.

Justin Bieber rolled up to the soundstage of "CSI: Crime Scene Investigation" and surveyed his domain. It was dope, but was it dope enough? Juss-Juss didn't think so. Juss-Juss was what Justin Bieber called himself in his head, because he was a child.

"I AM CRANKY!" said Juss-Juss as he toddled onto the set where he was filming a critical scene, one in which his character, Jason McCann, gave a cryptic clue to Marg Helgenberger's Catherine Willows about the whereabouts of a bomb. He stuck his tongue out at his new costar. "My name is Justin and I like purple," he said with a giggle.

"Hi. Justin? It's nice to ... meet you?" said Marg. The lady's voice kept going up at the end of sentences, and her eyebrows were all crinkly. Justin knew that face: That was the face his mom made whenever she was mad at him, or confused, or when she was praying to God to get rid of his Jewish manager, Scooter Braun. Justin hated that look more than he hated abortions. One thing Justin didn't hate, though, was cake.

"OK, and action!" yelled the director.

"No, Justin, your line is, 'I'll tell you where the bomb is over my dead body!'" said the director, who really only wanted to wrap up this shoot so he could go home and swim in his pool of wet 100 dollar bills. "And, action!"

"I WANT CAKE!" said Justin, louder. Naren Shankar and Carol Mendelsohn,
"CSI: Crime Scene Investigation's" executive producers, eyed each other warily. Both Justin Bieber's mom and his handler had warned the crew that Justin liked to "prank" people, but they had mentioned nothing of him having the mental capacity of a 7-year-old. "Maybe this was all a long-con in Justin's game," thought Naren. "Maybe Ashton Kutcher is punching me!" thought Carol, who still thought "Punk'd" was on the air four years after MTV pulled it. She also believed that the title of the show was "Punched."

"Can someone find this kid his Adderall prescription??" shouted the director, who didn't have time for this crap. But Justin (Juss-Juss) had already wandered away from the set in search of cake. He walked by the craft services table, and his stomach rumbled. Sitting precariously on a Lazy Susan was a giant, five-tier wedding cake. Don't ask why, "CSI" just has a good deal going with a bakery down the street. Justin grabbed a fistful right as Marg and the producers rushed over and greedily shoved it into his mouth.

"Justin, no! Bad boy! Put that down!" shouted Marg, afraid of what the extra sugar rush would do to the overstimulated tween. But Juss-Juss hadn't listened to a grown-up for years, not since his swagger coach Ryan Good started telling him that if he wanted to get the ladies, he needed to prove that he was the biggest, baddest dude out there.

"Get the ladies what?" Justin had once asked his swagger coach, but Ryan just laughed and told him that he would learn someday. So for now, Justin was content with cramming his oily face with hand-size chunks of wedding cake.His eyes were beginning to glaze over in a way nobody on set liked.

"JUSS-JUSS WANTS JUICE!" screamed Justin, referring to the bottle of Robitussin-DM that his mother smuggled down from Canada by the barrelful. In an effort to contain the teen rage that was bubbling around them, Naren and Carol both rushed to the walk-in fridge to see if they could find any apple juice. Before the others could stop him, Justin had taken off in the direction of the producers.

Five minutes later, Justin strolled back, pouting. There had been no juice where the bad man and woman took him, just nasty water. He had locked both of them in the cold closet so they could have a time out. "Juss-Juss wants cake?" said Justin innocently.

Marg shook her head, not believing that a child could get away with such bad behavior. "I can't take this anymore. I quit!" she said. But then she had a thought. "Wait, now that 'Two and a Half Men' is canceled, am I on the most popular show in America?" The actress looked at the cameraman, who only shrugged. He was union and getting off in 15, so he really couldn't be paid to care less.

"Screw it then," she thought. "I will just silently fume about this incident until I can finally make some tepid remarks about a child on a French radio show three months from now!"

Marg went home in a huff and counted all her money until she calmed down. Justin went home and ate a bunch of cake before boarding a plane with his lawyer and heading to Australia, where he was considered a flight risk.