On "Oprah" and in his new film, the former Chastity challenges our concept of masculinity -- and finds freedom 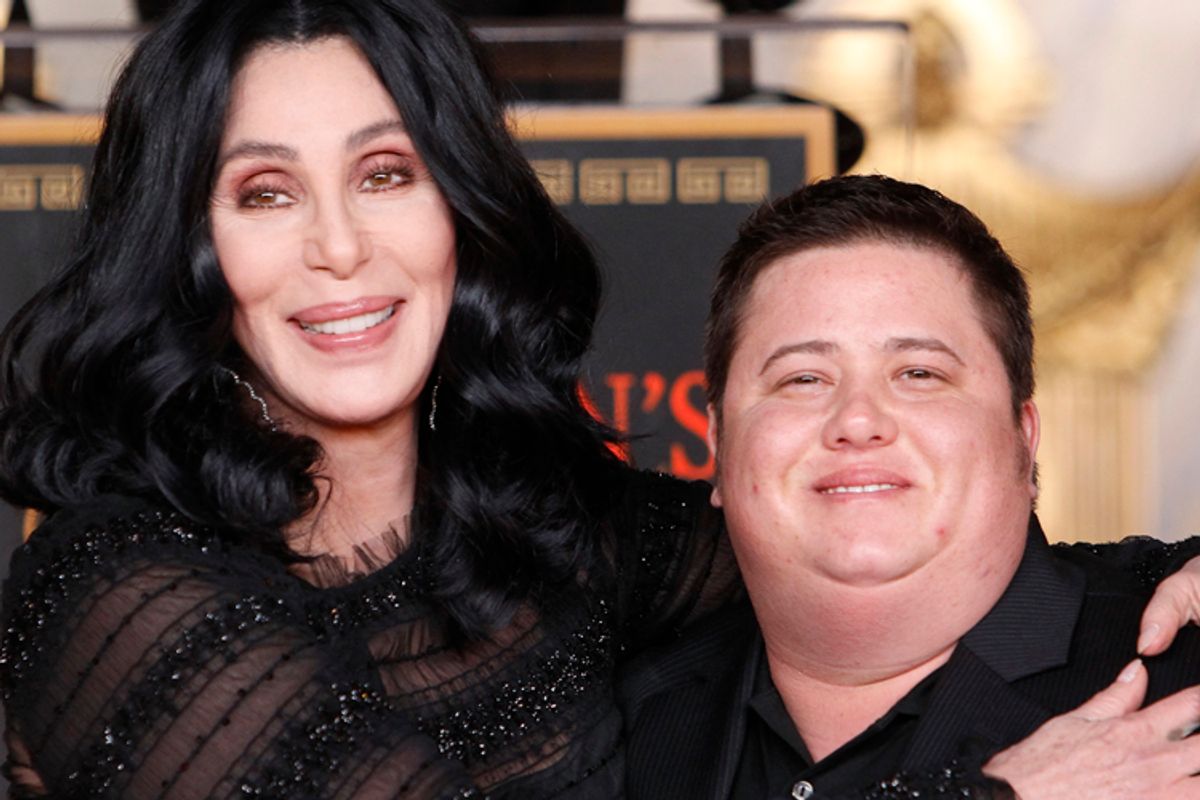 Cher poses with her son Chaz Bono during her hand and footprint ceremony in the forecourt of the Grauman's Chinese Theatre in Hollywood, California November 18, 2010. REUTERS/Danny Moloshok (UNITED STATES - Tags: ENTERTAINMENT) (Danny Moloshok)
--

When your mother is one of the most famous women in the world, and you've grown up before the world on her television show, you're used to living in the spotlight. But when you come out first as a high-profile gay activist and then as a female-to-male transgendered person, you're bound to attract a whole different kind of curiosity. How did the little blond girl known as Chastity Bono wind up as the burly man called Chaz?

Since revealing he was gender transitioning two years ago, Bono has become one of the most prominent transgendered individuals in the world -- and regular tabloid fodder -- a role the reserved, soft-spoken Bono has accepted with candor and grace. He's written a new book, appropriately called "Transition: The Story of How I Became a Man." And in a frank interview with Oprah Winfrey on Monday, the 42-year-old spoke of a lifetime of coming into his gender identity and previewed the documentary "Becoming Chaz," which airs Tuesday evening on Winfrey's OWN network.

The idea that changing gender is even possible is still a relatively new concept – and Chaz spoke sensitively on Monday of his own dawning awareness of gender reassignment, and of a pair of lesbian-identified friends who felt truly transgendered but "were about 15 years older and missed the boat." Most of us still live in a world in which gender has been rigidly defined, and for many, there's still a lot of ignorance and misunderstanding. Adding to that are the easy – and inaccurate -- comparisons between a deep-rooted gender identity and our cultural whims for cosmetic change. Bono didn't have his breasts removed because he doesn't like breasts per se; he did it because he's a man and men don't have breasts. (He's still anatomically female below the waist, but says, "I feel like a man now, and I'm really happy.")

It's illuminating for Bono, a figure many of us have known for decades, to be so forthright about his own feelings of confusion and curiosity. "When I was really little it was very clear to me that I felt like a boy and my friends were boys," he told Winfrey. Then adolescence threw a curve -- literally. "It felt like my body was betraying me. I went from an athletic, straight up and down kid to a very curvaceous woman." That's when other feelings starting kicking in as well. "I was 13 and starting to have feelings of attraction to other women," he explained. "I just made the obvious connection -- I must be a lesbian. And that identity worked for a little while ... But as I got older there was always this nagging feeling that I'm still not fitting in ... I always had this idea that, sure, I always wished I was a boy and felt like a boy. For some reason I thought there were other lesbians who felt that way and that was just a part of that community. Then I realized, that's not what being a lesbian is -- that's what being transgender is." It's just that simple -- and that complex.

Bono's story isn't just his own, though. His mother, Cher, and girlfriend, Jennifer Elia, represent the complicated emotions we all attach to gender, and the durability of devotion. Speaking on "Oprah," both Cher and Elia were open about the adjustments they've had to make as Chaz transitions. Cher repeated the anecdote she told the Advocate last year, of the sadness of hearing her daughter Chastity's voice for the last time on Chaz's voice mail, "and knowing I'll never hear it again." It must be especially odd for Cher that the new voice sounds stunningly like that of Chaz's late father, Sonny Bono. Elia, meanwhile, who has been with Bono since 2005, has had to make the switch from being in a lesbian relationship to living with a man. Elia talked openly about Chaz's experience with testosterone shots and how challenging it was last year when "He was going through a hyper masculine moment ... It did get difficult." And Bono admits, "We had to relearn how to be with each other. Saying the same things, with a different voice, didn't mean the same things to her."

A big part of Bono's journey to "becoming" has meant ending the life of the woman. And there's undoubtedly some grief that comes with that -- for the transgendered person and his loved ones. Would you still love your daughter or son or partner if he was a she, or vice versa? How much of that person's essence is tied to his or her gender? It's not as easy as unconditional commitment. Love has to change, because the person has changed. But Cher and Elia prove that it can work.

There's a line in "Hedwig and the Angry Inch," one of the sweetest, sliest movies ever made about the fluidity of gender, in which Hedwig's mother says, "To be free, one must give up a little part of oneself." It's a beautiful summation of a transgendered person's transition -- not simply in the literal sense of forfeiting a penis or a set of breasts. It's the surrendering of a long-held identity. It's the struggle of transformation. It's the loss of someone known and loved. It's the acceptance that, as Bono says, "This isn't going to solve every problem I have. This is going to solve this problem." But to anyone who wonders how a person could put his or her body through such a change, could leave the relative safety and acceptance of one gender for another, it's the answer to the question why. To be free.