Democratic principles in the War on Terror

What is now the fringe position on terrorism was, during the Bush years, mainstream party orthodoxy 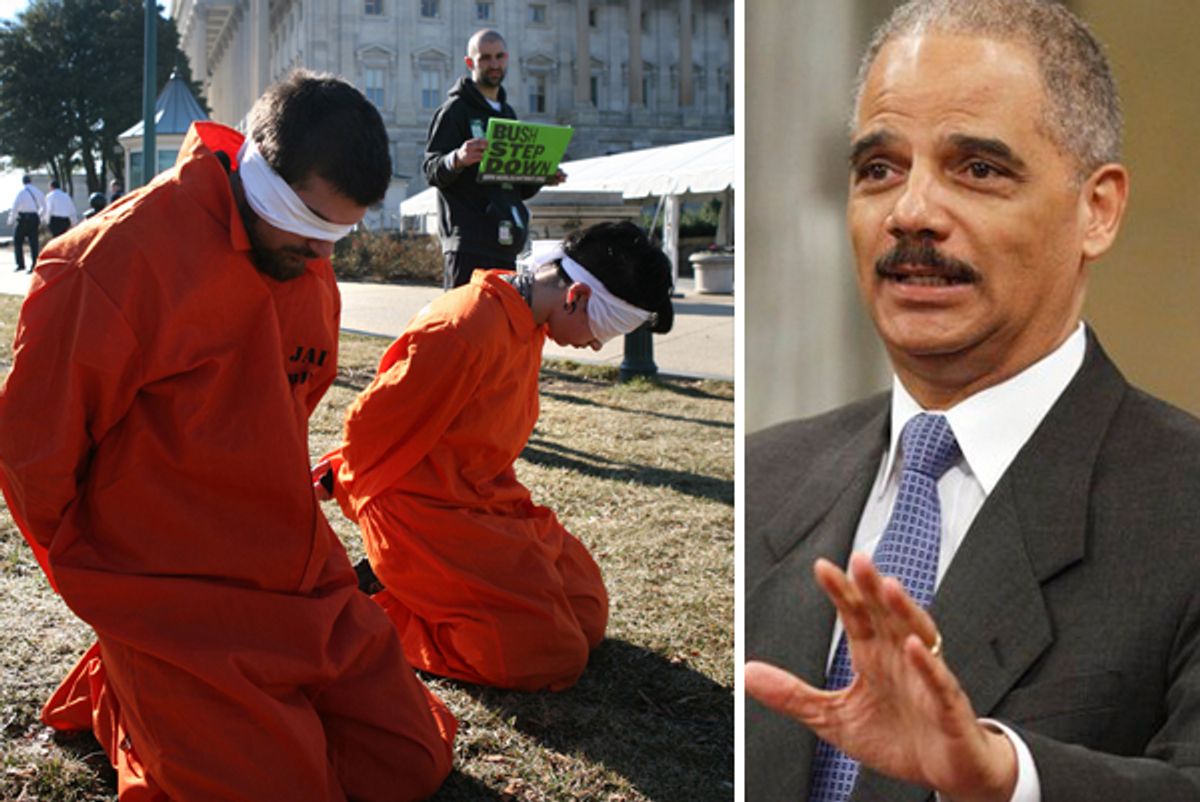 Senate Republicans yesterday filibustered the confirmation of James Cole, President Obama's nominee to become Deputy Attorney General.  There were a couple of reasons for their opposition, but it is principally grounded in the views Cole expressed when opposing Bush's Terrorism policies.  Specifically, a 2002 Legal Times Op-Ed authored by Cole contained the offending statements, as cited yesterday by GOP Sen. Chuck Grassley; behold the irony in Grassley's remarks:

Back in 2002, Mr. Cole was the author of an opinion piece in the Legal Times. In that piece, he stated, "For all the rhetoric about war, the Sept. 11 attacks were criminal acts of terrorism against a civilian population, much like the terrorist acts of Timothy McVeigh in blowing up the federal building in Oklahoma City, or of Omar Abdel-Rahman in the first effort to blow up the World Trade Center. The criminals responsible for these horrible acts were successfully tried and convicted under our criminal justice system, without the need for special procedures that altered traditional due process rights."

In other words:  Terrorists should be treated as criminals and accorded full due process within our normal "criminal justice system" -- i.e., dealt with as part of a law enforcement paradigm -- not treated as warriors subjected to "the rhetoric of war" and "special procedures that altered traditional due process rights."  In his now-controversial Op-Ed, Cole added:

The attorney general justifies much of his agenda by pointing to the "war on terrorism" and saying that it is an extreme situation that calls for extreme actions. But too much danger lies down that road. The protections built into our criminal justice system are there not merely to protect the guilty, but, more importantly, to protect the innocent. They must be applied to everyone to be effective. What are we fighting for if, in the name of protecting the principles that have raised this nation to the pinnacle of civilization, we abandon those very principles?

Cole's point:  even the most heinous Terrorists must be accorded the full and normal protections of our criminal justice system before being punished.  Even more notably -- and ironically -- Media Matters recently published a defense of Cole from the attacks launched by Fox News, arguing that Cole's views were mainstream because he was objecting to lawless Bush policies:

Cole criticized the Bush administration for, among other things, 'detain[ing] non-citizens without the benefit of counsel or judicial review, facilitat[ing] the implementation of military tribunals to try noncitizens for terrorist crimes," and for 'institut[ing] the use of the classification 'enemy combatant' to hold American citizens without access to counsel or judicial review.

Those, of course, are, with some modifications, the policies that the Obama administration has itself adopted (see: "Obama administration readies indefinite detention order for Guantanamo detainees" - "Obama to resume Gitmo military trials").  While Obama hasn't argued that American citizens can be held "without access to counsel or judicial review," he has gone further than that by arguing that American citizens can be targeted for killing by drone attacks without judicial review, and has sought to carry out that policy.  So many of the general theories and specific policies so vehemently condemned by Cole during the Bush years (when he was doing little other than voicing the standard Democratic view on such matters) are the ones this administration has now expressly and vigorously adopted as its own.

Speaking of that last policy -- the Obama administration's claimed power to assassinate American citizens without any due process, far from any battlefield -- consider what Obama's Attorney General Eric Holder argued in 2004 when he formally objected in court to the Bush administration's mere attempt to detain (not to kill, but merely to detain) U.S. citizen Jose Padilla without any due process.  Remember:  at the time, it was claimed that Padilla was one of the world's most dangerous Terrorists: actively attempting to detonate a "dirty bomb" in a large U.S. city; he was eventually convicted in court of terrorism-related crimes.  But no matter:  Holder insisted that the President was Constitutionally barred from acting against Padilla without full due process and judicial oversight.

The brief filed by Holder (along with others) was emphatic in insisting that the President lacked the authority to use military force away from an active battlefield, and that the claimed power to use such force against American citizens was dangerous in the extreme.  First, consider how Holder's Brief described the radical Bush position; is this not exactly the same argument as the one made now by those justifying Obama's power to target Awlaki and other U.S. citizens for killing? (click image to enlarge)

Further, Holder's Brief made the vital point that a President has the right to order military force on an active battlefield, but not away from the battlefield; away from a battlefield, argued Holder's Brief, the President must use the criminal justice system and afford due process to U.S. citizens -- even one accused of plotting horrible Terrorist attacks -- before acting against them:

After emphasizing the numerous law enforcement tools the President has to detain and arrest citizens suspected of plotting Terrorist attacks, Holder's Brief powerfully warned of the serious dangers in allowing the President to punish citizens as Terrorists without any due process or oversight from courts -- and again, remember, these dangers came, Holder argued, merely from allowing the President to detain (not target for killing) American citizens without due process (as Holder's Brief put it: the dangers of allowing "the Executive to imprison citizens indefinitely only upon its own say-so").  Please pay particular attention to the last part:

Holder's Brief concluded by eloquently pointing out that "the broad and largely unsupervised authority claimed by the Executive Branch" -- to unilaterally declare Americans to be Terrorists and punish them without proof of guilt -- "is also inconsistent with the fundamental principles of our Constitution."

Most importantly, Holder's Brief recognized that applying judicial oversight and Constitutional limits to a President's powers in the "War on Terror" might impede the Government's ability to capture Terrorists. It might, acknowledged the Brief, even impede the President from stopping a Terrorist plot.  But even a heightened risk of attack, Holder insisted, is the necessary and worthwhile price we willingly pay for being a nation of laws, free from unrestrained Presidential power.  Just marvel at the now-fringe position Holder so vehemently defended back then against the Bush administration:

I could live to be 500 years old, and I will never hear anyone be able to offer any remotely conceivable means of reconciling (a) those steadfast principles defended by Eric Holder -- as part of his opposition to George Bush's power to punish citizens as Terrorists with no due process -- with (b) multiple Obama policies, including the asserted right to assassinate U.S. citizens away from a battlefield with no due process.

Finally, in light of the events of the last week -- including not only the attempted Awlaki assassination but also the bin Laden killing -- it's worthwhile to underscore what Democrats once said about Terrorism generally.  In 2004, the Democratic nominee John Kerry famously (and correctly) said -- echoing Cole's words above -- that Terrorism was comparable to prostitution, gambling, and organized crime:  "nuisances" to be dealt with primarily through law enforcement but that will never go away entirely.  In a 2008 Atlantic article, Matt Yglesias declared that "Kerry was right" when he " said something about counterterrorism being primarily a question to be dealt with through law enforcement and intelligence rather than something that should be understood as primarily a kind of war," and as proof, Yglesias cited this study from the Rand Corporation, which concluded as follows:

Its report said that the use of military force by the United States or other countries should be reserved for quelling large, well-armed and well-organized insurgencies, and that American officials should stop using the term "war on terror" and replace it with "counterterrorism."

"Terrorists should be perceived and described as criminals, not holy warriors, and our analysis suggests there is no battlefield solution to terrorism," said Seth Jones, the lead author of the study and a Rand political scientist.

That view now, of course -- once the centerpiece of the Democratic Party's Terrorism arguments -- is decreed to be a fringe and radical view.  The same is true for Cole's argument that Terrorists should be deemed criminals, not warriors, and treated exactly the same way we treat criminals: with the full range of due process rights under our normal system of justice.  Believe me, to make that very same argument now is to prompt accusations of radicalism and even Terrorist sympathies.  And the same is also true of Holder's arguments that we must not allow Presidents the power to unilaterally decree citizens to be Terrorists and punish them as such; instead, they are entitled to full due process, even if it means, as Holder said, that doing so would risk a Terrorist attack.  That's because "our Nation has always been prepared to accept some risk as the price of guaranteeing" that Presidents do not have unrestrained power to act against citizens.

All of those views -- Democratic Party orthodoxy a mere three years ago -- have become relegated to the fringe under the Obama presidency by virtue of the President's adoption of what were once purely GOP/right-wing positions.  But it's worth recalling that they were indeed the backbone of the Democrats' once-vigorous opposition (at least in rhetoric) to the Bush/Cheney worldview of using war and battlefield theories to fight Terrorism and to erode core Constitutional and civil liberties.